This technical information has been contributed by
Adaptive Corporation 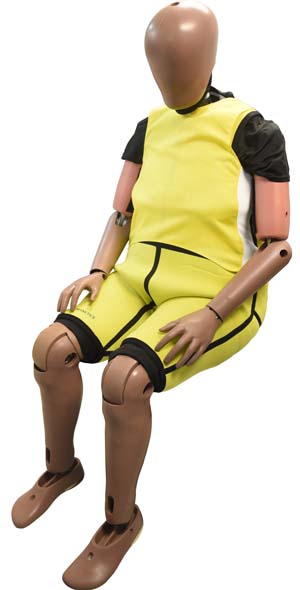 The following article was contributed by Adaptive Corporation and Humanetics.

The crash test dummy has come of age over many decades as the gold standard for safety testing of automobiles. Organizations like the National Highway Traffic Safety Administration (NHTSA), the Insurance Institute for Highway Safety (IIHS), and other agencies throughout the world continually update the requirements for driver and passenger protection. These updates require automakers to invest significant resources to ensure that their vehicles pass muster–and that the crash dummies they use in their cars realistically reflect what happens in the type of collisions these groups will be testing.

"Realistically" means that crash test dummies should reflect the full variety of human body types. Going beyond the first male-only dummies, the family has been expanded to include female, child, infant, and, most recently, elderly bodies. And these last ones have turned out to be a unique challenge for Humanetics, a global leader in the design, development, and manufacturing of crash dummies for 65 years.

In the automotive sector alone, Humanetics serves 100 percent of the OEMs and Tier I safety suppliers worldwide with these anthropomorphic test devices (ATDs), as well as calibration equipment, crash sensors and instrumentation, and crash simulation software models. Other customers include the aviation, energy, medical, military, and civil infrastructure industries.

Aging, and improving, the crash dummy

Humanetics's elderly dummy, introduced in December 2017, represents an important development in vehicle-testing technology and is designed to meet the unique characteristics of the world's growing, aging population. Baby Boomers are now in their 60s and 70s and are often heavier than they were on average just a few decades ago, yet healthy enough to be driving into their 80s and beyond. In 2015, there were more than 40 million licensed drivers aged 65 and older in the United States (U.S. Department of Transportation). This represents nearly one in every five drivers on American roads.

Research has shown that elderly occupants are more likely to sustain internal injuries during certain crash scenarios; bones are more fragile and soft tissues less robust. To reflect this, Humanetics's newest dummy captures the biofidelic nature of a 70-year-old female, 161 cm in height and 73 kg in weight–and is expected to have a significant impact on how the vehicle-safety community measures impact responses in crash events.

Due to the nature of the industry (crash test dummies are very expensive and can be re-used multiple times, so vehicle makers tend to order them in small quantities), Humanetics is often asked to produce custom products in low volumes. As the company worked to cost-effectively develop its latest elderly dummy model, Humanetics decided to look into 3D printing (also known as additive manufacturing) technology to more quickly fulfill its needs for small-batch production, less expensive replacement parts, and faster turnaround times.

"It's my job to look at the future," said Mike Beebe, chief technical officer at Humanetics. "I've been in the ATD business for 38 years and I'm always trying to figure out what new processes and materials we should develop going forward. One of the major discoveries we've made recently was that we could 3D print much of the elderly dummy. Now all of the components of the new elderly dummy, from the pelvis to the head assembly, are additively manufactured."

As the elderly dummy project began, Humanetics's design engineers felt that some of the expensive steel components in their crash dummies might be able to be replaced with 3D-printed plastic and rubber components. But they were having difficulty finding a material with the durability to withstand the forces and impacts of their unique crash-testing environment. 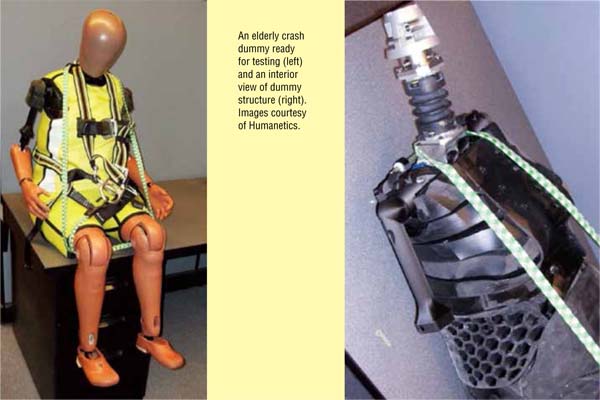 Humanetics Design Engineer Kris Sullenberger is responsible for day-to-day 3D printing operations at the Humanetics ATD manufacturing facility in Huron, Ohio. Kris operates several 3D printing machines from different manufacturers and he was looking for a way to use plastic components to replace the elderly dummy's steel ribcage assembly.

The traditional process creates the rib out of a piece of spring steel that is formed and heat treated. Then a piece of damping material is glued to the inside of the rib to control the response to impact. The rib is left to set, then tested, and the damping material is trimmed several times to achieve the desired performance. But the process is expensive and inconsistent; steel parts degrade over time, plastic and vinyl components are subject to hardening and shrinkage–and it all impacts the accuracy of the many sensors loaded onto a crash dummy.

Sullenberger tried using a plastic/rubber compound from one leading 3D printing manufacturer, but although the part matched many of the properties they were looking for, it wasn't strong enough. "We 3D printed some ribs out of the plastic," he said. "But after 20 hits, the ribs started to crack." 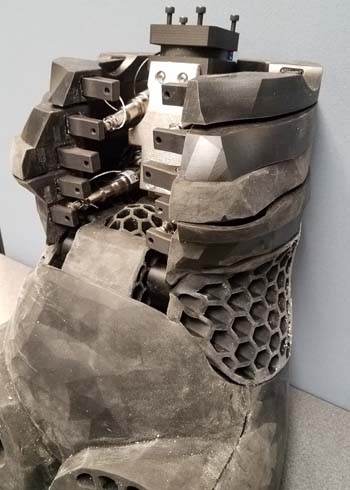 Tenaglia suggested they consider using Markforged's Onyx, a carbon-composite material reinforced with continuous Kevlar fibers, and he arranged to have a sample part made for dynamic testing purposes.

The piece met Humanetics's specifications, so they ordered a complete set of ribs, put them on an elderly dummy, and conducted 60-70 impacts with no visible deformation or damage.

"We've inflicted over 150 impacts to those Markforged-produced ribs to date," Sullenberger said. "And we haven't broken a rib yet."

After the successful trial, Humanetics purchased its own Markforged Mark Two 3D printer to make ribs and other skeletal components. When the printer arrived, it took Sullenberger just a few hours to install the machine and set up its Eiger software. "I was used to complex installations when a tech spends two days onsite to get a machine up and running," Sullenberger said. "Installing the Mark Two was a breeze. I took it out of the box, plugged it in, and it was ready to go. The few questions I had were answered with a couple of emails."

With production underway on-site, Humanetics is seeing Onyx material costs similar to those of the previous steel. And significant efficiencies are now coming from those threefold gains in rib durability over the plastic/rubber alternative they considered. Moreover, time-savings versus its original product methodologies are substantial: Manufacturing a set of ribs conventionally used to take two to three weeks. With their Mark Two, Sullenberger's team can print a single rib in twenty-four hours and a full set in a week.

Beebe and Sullenberger continue to look for additional applications where 3D printing can improve productivity. Most of the more complex parts on the dummy are molded. Producing the molds out of machined steel can be expensive and time consuming. In comparison, they've learned that a 3D-printed mold can be replaced in a day or two, saving between 40 percent and 60 percent in assembly and labor costs.

Of course, it's not just the skeleton that can suffer the effects of a car crash: Humanetics's models also include the softer internal organs. The company generally represents internal organs in terms of regions (such as the thoracic or abdominal) and creates test systems to represent each overall region, rather than an individual heart or lung. While regional data is important, the company's researchers would like to have a more in-depth understanding of the characteristics of the specific organs within those regions–which is where 3D printing is providing new answers for the elderly crash dummy in particular.

For instance, in the abdominal region, the liver is on one side of the body and the spleen is on the other. To better understand the different deflection characteristics of each organ, Humanetics has begun 3D printing organs individually to see how their qualities contribute to overall regional crash-test readings.

"We're trying to make stiffness in the thoracic and abdominal areas variable to better predict injuries," said Beebe. "We're also looking for a deeper understanding of the relationship between the outside flesh and these organs. Representing all these characteristics in our crash test dummies will provide better test results."

"Elderly people tend to have more flesh in front of the bones," he pointed out. "This affects how a person moves within a seatbelt system and how the belt interacts with the passenger's body during a crash. The ability to generate new organs using 3D printing technology will lead to shorter lead times, improved restraint systems, and safer vehicles."

The team at Humanetics (www.humanetics.com) is optimistic about the potential for 3D printing to continue to support their quest for the perfect crash dummy. They also see the benefits of the technology extending to their customers, who might someday be able to go to a local service bureau to print the spare parts they need.

From a manufacturing perspective, the engineers would also like to see 3D printers taking a larger role in their own production process going forward. "If we could use four or five printers at once, we could print a full set of ribs in a day and a half instead of a week," said Sullenberger. Faster turnaround and greater fidelity will help make the road (and the air) safer for everyone, no matter what age they are.

This technical information has been contributed by
Adaptive Corporation