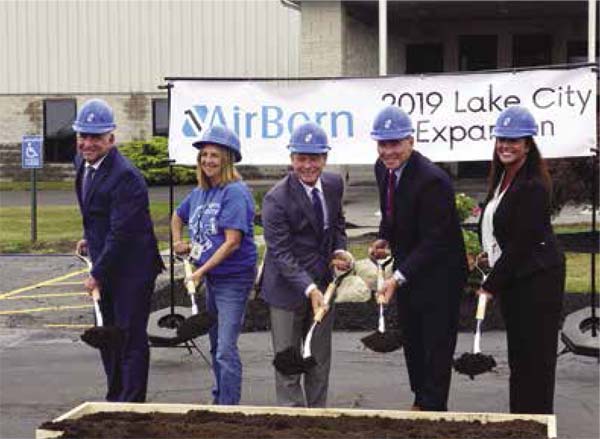 LAKE CITY, Pa.–The electronics manufacturer AirBorn, Inc., is expanding its footprint in Erie County, doubling the size of its manufacturing operations. Last August, Pennsylvania Secretary of Community and Economic Development Dennis M. Davin joined AirBorn leaders in breaking ground on a $3.7 million investment in Lake City that is expected to add up to 249 new jobs to the community.

“Lives depend on what we build in Lake City,” said AirBorn Director of Operations Jon Nelson in a company release. “At AirBorn, our work is much more than a job; it’s a purpose. We build mission-critical components that cannot fail. We have a wonderful team of skilled assemblers who ensure that our products are of the highest quality and reliability.”

Components manufactured by AirBorn (https://www.airborn.com/) can be found on the moon, Mars, and the International Space Station, as well as in tanks, warships, next generation fighter jets, and in hospital emergency rooms, the company said.

“AirBorn’s investment in Lake City is a testament both to the workforce and to the partnership we’ve formed with the Commonwealth of Pennsylvania,” said Airborne President and Chief Operating Officer Michael Cole. “We build innovative electronic solutions for companies large and small. These solutions will not only be made in the USA, but made in Lake City.”