This technical information has been contributed by
Kubotek USA 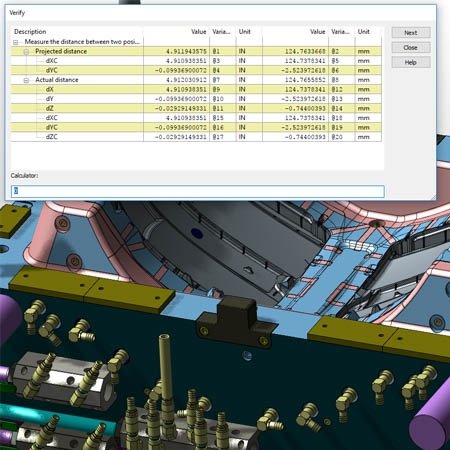 Designed for both the simulation novice and the simulation analyst expert, Kubotek USA's recently released KeyCreator Analysis software allows designers with limited FEA (finite element analysis) knowledge to analyze a part faster, and with more ease and accuracy, according to company representatives.

KeyCreator's appeal spans job shops to OEM design engineers, and Kubotek (www.kubotekusa.com) claims its new product is the most inexpensive CAD simulation software on the market with its range of offerings. Combined with KeyCreator direct modeling software, KeyCreator Analysis can run basic structural analysis all the way up to multi-physics analysis. Auto meshing is powered by the software's Sefea technology, which speeds analysis time using a less-dense mesh.

Because it is coupled with direct modeling technology, the software allows for easy model preparation without the need to be a CAD operator. "One of the core strengths of this product is the fact that it's based on our direct modeling technology, and so in the CAD industry, we're different because we pioneered a rebirth of what we call direct modeling," said Kubotek Vice president of Sales and Support, Matt Carr. Competitors, such as SolidWorks®, use a history-based feature to edit and make changes, but with KeyCreator's direct modeling, "they don't need that level of complexity," Carr said. "We just simply directly access the geometry we're working on and you can change it. It's a technology under the hood that actually mines the data—the intelligence of the CAD geometry."

Direct modeling is important to FEA because it's a "door opener" that enables designers to work with non-native geometry. It doesn't matter if the source of the data is from ProE® or SolidWorks or other programs. "It allows us to work with non-native formats. It means, in a supply and OEM chain, it doesn't really matter [what] the source of the data [is]. We still have the same access and ability to make changes," Carr explained.

Because it doesn't matter where the model came from, KeyCreator Analysis is unique in that it allows operation in the same environment and on the same software. A job shop doesn't need to have "multiple CAD packages to make changes to the model in order to manufacture them or to do analysis on models that already exist," said Scott Sweeney, vice president of marketing for Kubotek. "That's really the core message about direct modeling. There's of course the simplicity and ease of use, but also the openness of the system."

Along with its appeal to job shops and its low cost, what differentiates KeyCreator Analysis from other programs on the market is the product's Sefea (SeFEEah) technology, which stands for "strain-enriched finite element analysis." For the more advanced user, Sefea is a "mind-blower of a product," said Carr, explaining that it puts true multi-physics on the solver with advanced algorithms that can handle large, complex models while using less memory resources. All multi-physics calculations are performed simultaneously, giving a true multi-physics result, while competing products on the market compute results individually and then combine them into its own solution, he said. The results with KeyCreator Analysis are a more true-to-life analysis, according to developers. "It allows us to complete problems you couldn't normally complete," Carr said. "So that's very unique to us and we're actually the first commercial application of that on the market."

Sefea allows for a much simpler mesh, thus enabling faster results. "It allows a common tet (tetrahedron) four mesh to compute the same results as higher order meshes, like tet 10 or above," Carr said. "And so it reduces the calculation and memory required dramatically."

Demonstrating the software's auto meshing technology on an HVAC assembly, Kubotek Senior Application Engineer Grace Chan said the auto mesher is intuitive. "There's much smaller sized elements here because the features are smaller. The mesh is small enough to make smaller elements. It takes under four seconds to calculate a mesh that has over 16,000 elements," she said.

Although job shops might only be using KeyCreator Analysis in the static or structural mode, the software's advanced Sefea technology helps satisfy the needs of advanced designers. "The nice thing is that [for] people who want to expand and do these types of analysis, we don't have a limit," Sweeney explained. "That's very unique to us. We can expand capabilities to the most expert level, if needed."

Some job shops might feel compelled to buy multiple CAD systems to accommodate different imported files from OEM customers. "That gets very costly, but our solution is simple. The source of data doesn't matter," Carr said of the fully-integrated direct CAD system. And while about 70 percent of FEA users work in the more basic structural or static mode, KeyCreator Analysis is unique in that it also caters to the more advanced user, up to the PhD realm.

This technical information has been contributed by
Kubotek USA