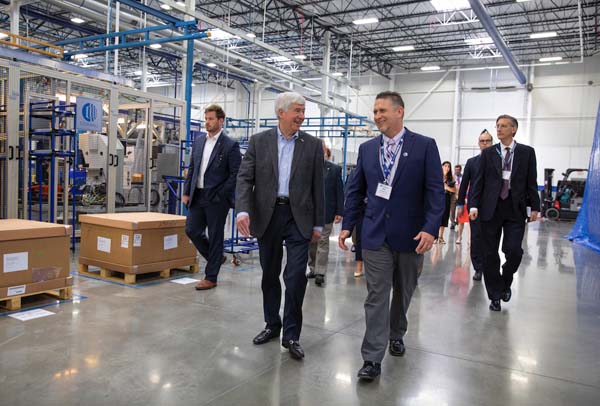 Michigan Governor Rick Snyder, Shelby Township Supervisor Richard Stathakis, and other dignitaries were on hand to "push the button" for Cosworth's advanced manufacturing center, described by the company as "one of the most sophisticated in the world and built for the design and development of the 'car of the future' technology.

"I appreciate the confidence that Cosworth has shown in our state and our talented workforce," Gov. Rick Snyder said in a press release. "Having this global company choose to build their North American Headquarters in Michigan further cements our place as the world leader in mobility. "

"With a 60-year legacy and best known for pushing the limits in modern automotive solutions, we are eager and excited about the next chapter in the Cosworth story," said Cosworth CEO Hal Reisiger, in the release. "Our North American Headquarters brings us even closer to our tier-1 U.S. partners and reveals what the next generation of high precision, 21st century advanced automotive manufacturing looks like. We are committed to keeping Cosworth and Michigan at the forefront of innovation, design, engineering, and production to further advance vehicle and driver performance."

Cosworth's $50 million investment in the new headquarters is expected to attract innovative companies and STEM workers to the area, the company said in the release. Upon completion, the new advanced manufacturing facility will be capable of producing Cosworth's full electronic and powertrain value streams, solid state sensors, engineering software, hybrid engine technologies, and consultative services.

"We warmly welcome Cosworth to Shelby Township and Macomb County, as they are a shining example what is driving growth and innovation in advanced automotive manufacturing for the car of the future," said Shelby Township Supervisor Stathakis.

Cosworth (www.cosworth.com), a tier-one supplier, is working with a number of leading OEMs that are shaping the landscape for the car of the future while focusing on performance, efficiency, connectivity, and automation technology.

The company has developed a range of automotive hardware and software technologies–from high efficiency engines to groundbreaking sensors–and secured long term contracts through to 2026 with a pipeline value over $1 billion. More than 100,000 cars currently on the road in the U.S. are reported to be equipped with Cosworth-patented AliveDrive technology that integrates camera sensors, vehicle dynamics data, and data analytics software.