This technical information has been contributed by
ELSCO Transformers


No Time to Lose When a Power Transformer Fails 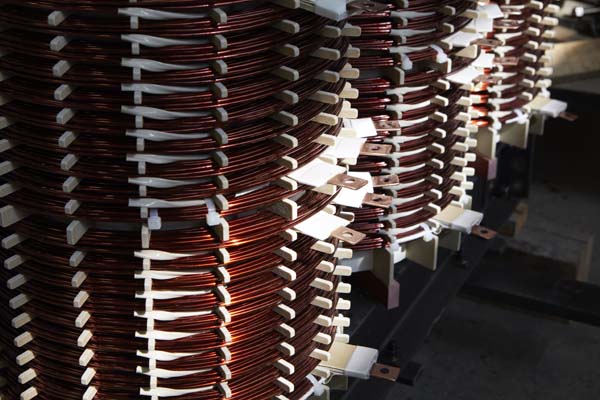 Fast action can save manufacturers 'thousands' when a failed power transformer stops production in its tracks.

Silence...the sound that no manufacturing general manager wants to hear. When a power transformer that supplies a plant goes bust, everything comes to a grinding halt. At such times, the only thing audible is the sound of net profit being sucked out of the air.

When disaster strikes, the only thing that counts is getting a replacement transformer as soon as humanly possible. Make that faster. To match such urgency, there are electrical contractors and transformer suppliers who specialize in emergency replacements that can bring everything back to normal in short order. The recent experience of how one East Coast manufacturer succeeded in quickly regaining full production status after a transformer failure provides lessons learned for others.

No Time to Lose

According to "The Real Cost of Downtime in Manufacturing," a story by Graham Immerman that appeared in a recent issue of MachineMetrics, the greatest unplanned expense is caused by unexpected downtime. The analyst firm Aberdeen Research found that unplanned downtime can cost a company as much as $260,000 an hour.

The failure of a power transformer, which acts as the heartbeat of any manufacturing plant, represents a priority one emergency.

"When the customer called us in a panic to explain that one of his dry-type power transformers burned up and half of his facility was down, we knew we had to act fast," recalled George Whitcomb, P.E., president of IETC, an industrial commercial electrical contractor based in York, Pennsylvania.

As a design-build electrical contractor, IETC provides a wide range of services and installations, including replacement of power equipment.

"In general, the biggest issue for us contractors when searching for a rush transformer replacement is reliability, dependability, and promptness," continued Whitcomb. "The transformer has to arrive ASAP, fit into place with minimal issues, and has to work right the first time."

In this case, the customer needing a rush transformer was a major manufacturer of threading tools–part of an electric-intensive industry that draws countless kilowatts-per-hour to run its drills, presses, metal benders, and CNC machines.

"This manufacturer had two, dry-type transformers, each rated at 4160 Volts, stepped down to 480 Volts. One of them failed, so half of their facility went down," recalled Whitcomb. "As a stopgap, they wanted to feed the entire plant from the other unit. Of course, everything went black as they rewired the bussings to transfer the load. But since a single transformer wasn't sized for full plant demands, they had to dial back their production schedule."

Any reduction in productivity proves costly, demanding immediate action. According to one industry newsletter, a survey of 101 manufacturing executives in the automotive industry concluded that the cost of stopped production runs an average $22,000 per minute.

Whitcomb's company rushed over a technician to see what happened, assess the situation, and take measurements. As is often the case, the plant facility manager doesn't specify the replacement, but turns to an electrical contractor for a quick, but lasting, resolution.

"We got the specs and proceeded to see if anyone had one in stock," said Whitcomb. "I called ELSCO Transformers first, because I'd worked with them for years and was lucky to find they had an exact match ready to go. That would greatly reduce the turnaround time, so it came down to availability, reputation, and quality."

Founded in 1912 by former Westinghouse engineers, Electric Service Company (www.ELSCOtransformers.com) specializes in providing new, repaired, and rebuilt transformers ranging from 500 through 3750 KVA in 2.5, 5, and 15KV primary voltages from its Cincinnati, Ohio manufacturing plant.

Whitcomb understands that transformer construction and materials make a huge difference in reliability. For instance, the way the coils are wound around the core of the transformer greatly affects its robustness. Hence, round wound transformers are superior to rectangular wound because they stay cooler, run quieter, and present less risk of short circuit failure. This enables manufacturers to offer longer warranties–as much as five years, as in the case of the new ELSCO dry-type transformer that Whitcomb bought.

Beyond the improved reliability factor, the increased efficiency of the round design consumes less electricity. Some round wound transformers exceed the proposed efficiency standards for Energy Star compliance, drastically lowering utility costs for a manufacturing plant.

Whitcomb's team knew they had specified the right transformer, but since time was of the essence, getting it in place fast was just as important.

"We coordinated a dedicated truck from ELSCO for this application; that paid off because we got the transformer within a few days," explained Whitcomb. "When we explained the quick turnaround to our customer, they were ecstatic because they thought they would have to sit and wait 12-to-16 weeks."

Still, the arrival of a plant transformer signals the beginning of the real work, where attention to details like the duplication of the high and low voltage bussbars can spell the difference between a lengthy and costly replacement process, versus a quick, cost-effective plug-and-play solution.

"The big hurdle was fitting the new transformer between a 5KV load interrupter switch on one side and the 480 V breakers on the other, so everything was fixed in place on either side," continued Whitcomb. "We knew every measurement had to be exact in order for installation to go quickly."

Whitcomb coordinated with ELSCO to get the dimensions right so they could make the necessary modifications to the transformer before it was shipped out.

"Without that accuracy of tolerances, we would have had to modify things in the field and it would have taken a lot longer," added Whitcomb. "But as a result of the effort spent up-front, our rigger was able to slide the new transformer right in. It fit like a glove."

The Sweet Sound of Production

With the plant back up and running in record time, the plant owner personally visited the transformer room to see for himself the new transformer in action.

"Our on-site tech reported that the owner walked into the room as our guys were cleaning up and said, 'When are you going to turn it on?' He didn't realize that it already was operating; it was that quiet," said Whitcomb. "Their other existing transformer was humming like crazy. He was so impressed that he said 'We'll have to see about having you guys replace the other one.'"

A catastrophic transformer failure can strike any manufacturing facility at any time. But with the availability of suppliers that can drop a plug-and-play, matched replacement on the plant loading dock within days, the only silence on the manufacturing floor will come from the quiet operation of the new transformer.

This technical information has been contributed by
ELSCO Transformers