This technical information has been contributed by
BrightVolt 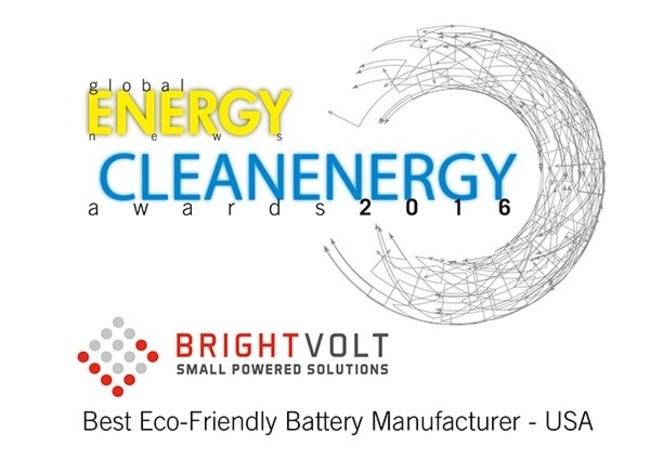 The 2016 Clean Energy Awards recognize the development and implementation of clean energy solutions, BrightVolt reported in a press release.

"It's outstanding for BrightVolt to be recognized for delivering better batteries that are safer for the environment, as well as safer for products that now contain potentially flammable materials," said Todd Peters, BrightVolt CEO, in the release. "Our highly proprietary technology–BrightVolt PME® (Polymer Matrix Electrolyte) – also enables cleaner battery chemistry, battery safety, and manufacturing process–all critical to sustainable energy."

As IoT and wearable applications continue to expand, many designers and manufacturers, from Fortune 100 companies to startups, are working with BrightVolt to develop safer, smaller, and more flexible batteries to power these devices. BrightVolt reports that it has already manufactured more than 10 million  ultra-thin film batteries that are used in commercially viable products.

The 2016 Clean Energy Award also recognizes BrightVolt's rigorous environmental sustainability policies that include commitments to developing products and processes that are safe and environmentally sound, and help preserve resources and the environment. Adherence to sustainability and safety is an integral part of BrightVolt's ongoing goal to be recognized as a leader in clean energy development.

Last November, BrightVolt (www.BrightVolt.com) received the Best New Material or Component Development award from IDTechEx in recognition of its work to develop safe, flexible, customizable batteries for the future of wearables and IoT. BrightVolt was recognized at the IDTechEx Show! 2016, an annual conference that brings together emerging technologies with global end-users.

"We are extremely pleased and honored to have received this award for the Best New Material or Component Development," said Todd Peters, BrightVolt CEO, in a press release. "It is a privilege to work with such an exceptional team on developing safe, flexible, solid-state and customized batteries that are going to help revolutionize the next stage of wearables and IoT technologies. The IoT world needs better, safer batteries."

The solid-state BrightVolt batteries are built using the patented battery technology, BrightVolt PME® (Polymer Matrix Electrolyte), a technology that is said to increase the reliability, stability, and safety of the battery. Batteries that are built using the technology are said to be non-combustible, non-toxic, non-corrosive, and disposable. The patented chemistry, development and manufacturing process is reported to enable more rapid development and a more cost effective approach to manufacturing at scale. It has been employed to manufacture more than 10 million BrightVolt ultra-thin film batteries and is used in commercial ready products, according to BrightVolt.

This technical information has been contributed by
BrightVolt