This technical information has been contributed by
Curtiss Motorcycle Company 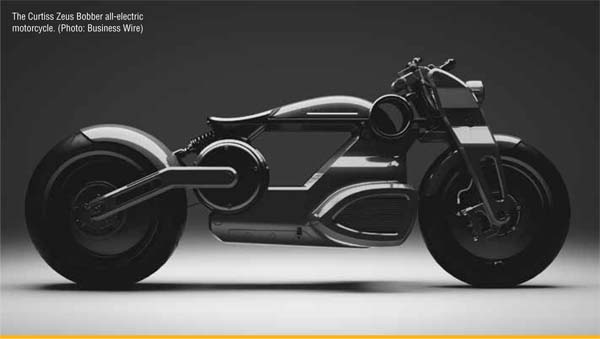 MILAN, Italy– Curtiss Motorcycle Company unveiled two new versions of its all-electric Zeus motorcycle in November at the EICMA motorcycle show in Milan, Italy. Set in both Cafe and Bobber configurations, the two new models are slated for production in 2020. They are said to represent an evolved design and technology package based on the company’s newly-formed Advanced Powertrain Division, led by Paul Ogilvie.

“We are excited to showcase what we believe is the best technology in the industry,” said Ogilvie in a company release. “By utilizing cutting-edge energy storage systems to balance power and range, we aim to deliver a range of 280 miles (450km), 145 foot-pounds of torque, and a 0 to 60 time of 2.1 seconds, all with a 140Kw motor.”

Curtiss Design Director Jordan Cornille discussed how Zeus’s design has evolved since the concept prototype was unveiled in California earlier in 2018.

“Our original Zeus concept prototype featured obsolete battery and motor technology that was as graceful as a cinder block,” said Cornille. “This made it difficult for our team to engineer the machine we all aspired to create. With our new Advanced Technology division, we are developing new battery, motor, and control system technologies that enable us to deliver on our clean, modern aesthetic vision.”

This technical information has been contributed by
Curtiss Motorcycle Company