This technical information has been contributed by
ExOne 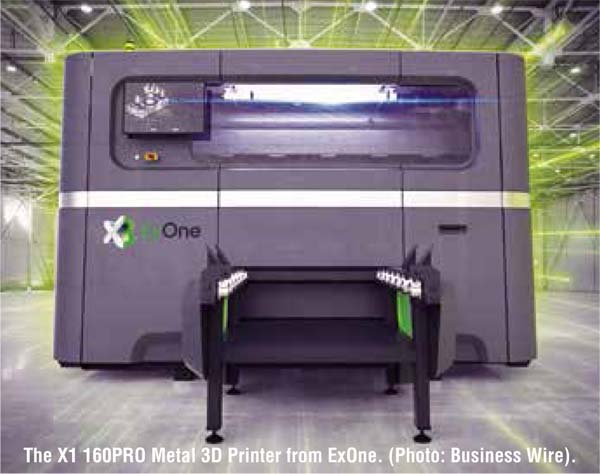 The new system, introduced in November 2019 and scheduled to ship in late 2020, is the 10th and largest metal binder jet 3D printer from ExOne, which launched its first commercial metal binder jet system in 1998, the company said in a press release.

“We’re incredibly proud of what this model means for the future of metal 3D printing and sustainable production of large metal parts without design limitations,” said ExOne CEO John Hartner, in the release. “Our technology roadmap has been leading us to this machine for more than two decades. At the same time, the X1 160 PRO was also designed in response to growing demand from automotive, defense, and aerospace customers.”

Binder jetting is a method of 3D printing in which an inkjet prints a binding fluid onto a fine layer of powder, building a part, one layer at a time. ExOne’s Triple ACT is said to solve one of the biggest challenges of binder jetting metal powders: dispensing, spreading, and uniformly compacting ultra-fine powders with an average particle size, or D50, of 9 microns. Although the cohesiveness of these powders makes them prone to caking and difficult to dispense, ExOne’s technology overcomes this challenge, the company said.

The X1 160PRO joins ExOne’s growing family of metal 3D printers, which includes the Innovent+, an entry-level system used globally for research, design and small part production, and the X1 25PRO, a mid-size production 3D printer that is said to be large enough for most metal parts manufactured today. The X1 25PRO began shipping to customers late last year.

Shortly before introducing its latest printer, ExOne announced it is collaborating with Global Tungsten & Powders (GTP), also of Pennsylvania, to advanced 3D printing of tungsten metals. The collaboration is focused on developing two metal-matrix composite materials. One is cemented carbide (WC-Co), a tough, hard material used in cutting tools and wear-resistant parts. The other is copper-tungsten (Cu-W), used in applications that require high heat resistance, high electrical and thermal conductivity, and low thermal expansion.

“Traditionally, tungsten carbide powder is pressed into the desired shape and then sintered to give it strength and density. Instead of costly and timely mold construction, the parts now can be printed directly in the desired shape, still using sintering technology to achieve the final strength,” she said in a statement. “We are excited to work with ExOne in the development of cutting-edge technology for the additive manufacturing industry.”

This technical information has been contributed by
ExOne