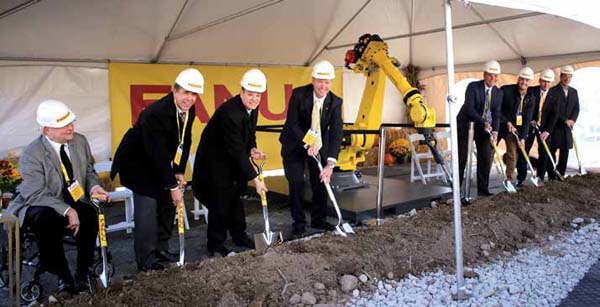 “Robotics and automation are key drivers of manufacturing competitiveness,” said Mike Cicco, president and CEO, FANUC America, in a prepared release. “We’re looking forward to expanding our facilities here in Oakland County to keep pace with the growing demand for automation.”

Scheduled to open in the fall of 2019, FANUC America’s new North Campus will house engineering, product development, manufacturing, and warehousing. The $51 million expansion is expected to create 100 jobs.

FANUC’s products are applied in a wide range of industries, including automotive, aerospace, consumer goods, food, pharmaceuticals, logistics, and warehousing, to name a few. Since 1982, the company’s line of painting robots, and a variety of automation software products, have been designed and built in Michigan.

“To highlight the importance of robotics in the manufacturing sector, we’ve included one of our robots to help us break ground,” Cicco said.