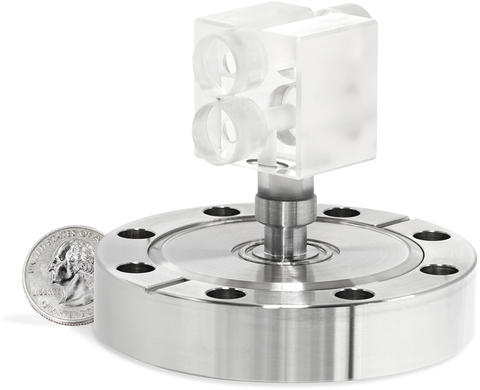 GAITHERSBURG, Md.–In collaboration with industry, researchers from the National Institute of Standards and Technology (NIST) have made the first portable prototype of the Fixed-Length Optical Cavity (FLOC), a device that uses light to measure pressure with higher accuracy and precision than most commercial pressure sensors.

This newest version is a milestone on the journey toward the creation of a device that could revolutionize the way pressure is measured with potential uses by many industries, particularly semiconductor chip and aircraft manufacturing.

In 2017, NIST and MKS Instruments, Inc. of Andover, Massachusetts, signed a Cooperative Research and Development Agreement (CRADA) to take a laboratory-scale version of the FLOC and create a smaller, more robust prototype that more closely resembles a commercial product. Thanks to the CRADA work, the joint NIST and MKS team has now successfully demonstrated a prototype version small enough to fit into two suitcases, said NIST physicist Jay Hendricks, the leader of the project.

“MKS Instruments brings over 50 years of pressure measurement, optical, and laser experience to this project, and we are honored to have been selected by NIST to work with them on this important and prestigious development,” said Phil Sullivan, CTO of MKS’s Pressure and Vacuum Measurement Solutions business. “We anticipate that this work will lead to a new wide-range, compact pressure measurement standard.”

Robust, portable FLOC sensors could potentially reduce the cost of producing semiconductor chips, such as those used in smartphones, and decrease the cost of air travel. This is because both the chip manufacturing and aerospace industries rely on pressure measurements.

Semiconductor manufacturers must accurately control the pressures of gases fed into a facility’s fabrication units during the making of a chip. Conventional pressure sensors are precise, but their readings tend to drift over time, meaning they must be taken out of service regularly to be calibrated. Since the FLOC’s pressure measurements are absolute, no calibration is required. So, FLOCs could be used to check the drift of conventional pressure sensors on the factory floor in real time, reducing the need for downtime.

Although it is beyond the scope of the current CRADA project, NIST scientists envision that one day the FLOC could be reduced even further in size, to a chip-scale instrument.

“The dream from the start of this project was: Could you get this whole thing shrunk down to the size where it could show up in everyday devices, like your smartwatch or phone?” said Hendricks. Better pressure sensors in cell phones could give first responders crucial information about whether a victim in a high-rise is on the tenth or eleventh floor. “That’s science fiction right now, but it’s where the technology could go,” Hendricks said.

The FLOC measures pressure by measuring subtle differences in the frequency of light passing through two physical channels called optical cavities: a reference channel in vacuum and a test channel filled with a gas, the pressure of which is being measured.

NIST first made a laboratory-grade version of the FLOC in 2014. It was designed to be sensitive and accurate enough to become a primary calibration standard, an instrument used to calibrate all other pressure measurement devices.

The original standard FLOC fills an entire large-scale laboratory table. The optical cavity containing the gas and vacuum channels is about 15 cm (about 6 inches) long, roughly the size of a travel mug. The apparatus also includes a vacuum pump; lasers to supply the light and the optics to manipulate them; and a rack of electronics to process the signal.

The new portable version is more compact. Its two-channel cavity is only about 2.5 centimeters long, a little longer than a postage stamp. Both the cavity and its optics fit into a single box, and there is also a smaller electronics rack and a pump for the gas-handling system.

In their partnership, NIST and MKS staff assembled the two-channel cavity at the heart of the prototype, while MKS managed the engineering of a miniaturized version of the system.

“We built the national standard version of the FLOC, which is designed to operate in a high-precision laboratory,” Hendricks said. “But we turned to industry under a CRADA to speed up the engineering and miniaturization work that needs to go into making something rugged, stable, transportable, low-power, and able to work in a variety of different environments.”

“Our focus is on the science and standards, and not typically on the engineering required for miniaturization,” said NIST chemist Kevin Douglass.

Researchers also changed the wavelength of light used from visible red (633 nm) to infrared (1550 nm), used by the telecom industry and, therefore, a popular wavelength for commercial products.

In all, the team was able to complete the prototype in about one year, allowing demonstration of the device last fall at the AVS International Symposium and Exhibition (a conference hosted by the professional society AVS, formerly the American Vacuum Society). So far, the portable FLOC is proving to have “great signal-to-noise and resolution,” Hendricks said.

Vibrations from people’s steps in the showroom could have theoretically thrown off the delicate measurements, but the device was robust enough to stand up to that noise. Its range has been demonstrated from ultralow pressures used in vacuum to about 2,000 pascal (the equivalent of about 2 percent of atmospheric pressure, or 0.3 psi), and work is currently underway to test it at much higher pressures.

There are opportunities for further miniaturization. To save time, the team used some off-the-shelf parts. Future versions can be customized to only include the functions the device needs. Meanwhile, Hendricks’ team will compare the performance of the miniature version against that of the standard FLOC. The team will likely also perform shipping tests, where they test the device, pack it up, ship it somewhere, bring it back, and then test it again to see if it yields the same results.