This technical information has been contributed by
NextFlex 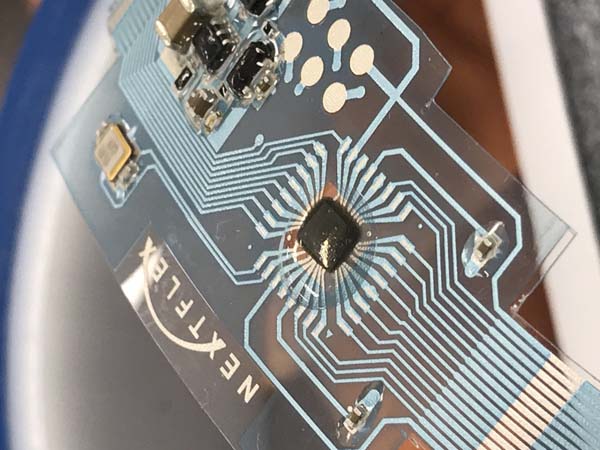 As part of the Flexible Arduino Microcontroller Project, NextFlex redesigned a device, typically built on a rigid printed circuit board (PCB), by printing and attaching thin bare die on a flexible substrate while maintaining the performance associated with traditional packaged integrated circuits (ICs). The achievement ultimately helps realize FHE’s enormous potential for creating ubiquitous IoT and sensor products for consumer, commercial, and military applications, NextFlex said in a press release.

Arduino is an open-source, microcontroller-based electronics prototyping platform that offers versatile, easy-to-use hardware and software. As a result, Arduino has achieved a high degree of popularity with developers ranging from novices to seasoned experts because it is open source, with publicly available design files and bills of materials (BOMs), and low cost.

Up until now, however, Arduino products have been built with traditional packaged die microcontrollers, which deliver high performance and functionality, but have design limitations (fragility, rigidity, bulkiness) that complicate integration into newer sensor devices that may be flexible or curved in design.

NextFlex (www.nextflex.us) tackled this design challenge head on by developing a process flow for manufacturing a flexible Arduino that reduced the number of process steps by almost two thirds versus traditional electronics manufacturing processes.

NextFlex replaced the traditional circuit board with a thin, flexible plastic sheet and used digital printing processes for circuit elements. Die attach of a thin bare die eliminated traditional microcontroller packaging while further enabling flexibility of the product. The new process translates to anticipated savings in manufacturing time and cost, as well as a significant reduction in the end-product weight. The flexible Arduino is only a third of the weight of the rigid Arduino Mini board.

This technical information has been contributed by
NextFlex