This technical information has been contributed by
Minnesota Rubber and Plastics 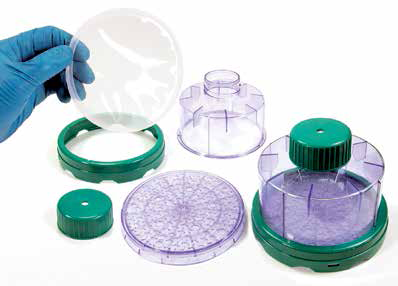 Wilson Wolf’s G-Rex Gas Permeable Cell Culture System, molded and assembled by Minnesota Rubber and Plastics, is the product of a collaborative effort undertaken by the two companies’ engineers. The group effort is said to have eliminated several components from the original design and reduced the cost of the product. Photo courtesy of Wilson Wolf/Minnesota Rubber and Plastics

MINNEAPOLIS–Wilson Wolf Manufacturing Corporation has said that it created a paradigm shift with its uniquely designed cell culture device. The device, the G-Rex® Gas Permeable Cell Culture Device Rex is a patented, FDA registered Class 1 medical device that represents the company’s belief that convection, rather than diffusion, facilitates maximum cell growth. When compared to traditional cell culture devices, Wilson Wolf’s designs “provide the easiest and fastest way to generate the most cells in the least amount of space,” the company said on its website.

“By discovering that convection governs nutrient transport, not diffusion, we are revolutionizing device design to provide advantages not previously possible,” the company said.

To bring its innovative design to market as a finished product, Wilson Wolf connected with Minnesota Rubber and Plastics (MR&P), a contract manufacturing company with an established reputation in the development and launch of complex products. These products range from high-tolerance medical components and assemblies to final sterile packaged devices that use medical-grade elastomers, liquid silicone rubber, and thermoplastics.

Minnesota Rubber and Plastics facilitated the unique design by providing an efficient and high-quality molded, assembled, and packaged G-Rex branded product ready for the medical marketplace.

The G-Rex final product assembly design was accomplished through DFM (Design for Manufacturing) collaboration among Wilson Wolf engineers and MR&P engineers. Working together, the group eliminated several components and improved the overall design and final product cost. Their work on the G-Rex 100 Series set the stage for a complete line of cell culture products.

A key to the G-Rex gas permeable cell culture process is the 0.010-inch-thick, liquid silicone rubber (LSR) membrane molded by Minnesota Rubber and Plastics. In the device, the LSR membrane provides convection nutrient transport (not diffusion), generating the most cell cultures in the least amount of space.

“Convection, not diffusion, is the key to achieving maximum cell growth with uninterrupted access to nutrients,” Wilson Wolf stated on its website. The company’s cell culture device is reported to be able to turn 300 million cells into 100 billion cells in just 11 days. G-Rex is a patented FDA registered Class 1 medical device.

The G-Rex LSR membrane is contained in a four-component thermoplastic assembly consisting of an incubator shelf and a high nutrient capacity bottle, supported by a ring at the base and a cap at the top. All molding, assembly, and packaging operations are done in Minnesota Rubber and Plastics’ ISO 13485 Class 7 and 8 clean rooms.

Wilson Wolf officials said that the G-Rex process begins by adding cells and a large volume of media into the device. The incubator is set in oxygen from ambient air, and CO2 from the media is exchanged through the gas permeable membrane. Cells obtain oxygen and nutrients on demand, with no need for media exchange, shaking or rolling. The cultured cells are collected by withdrawing 90 percent of the media volume and removing the cells.

According to Wilson Wolf officials, the G-Rex proprietary technology is straight-forward and leads to powerful therapies. The product is now available to the medical community in multiple sizes and packaged quantities.

Minnesota Rubber and Plastics (www.mnrubber.com) has been in business since 1945. The company said that its experience in advanced material formulation enables it to comply with FDA, EC 1935/2004, NSF 61, and NSF 51, plus ISO 10993 and ISO 13485, to meet customers’ unique product requirements.

This technical information has been contributed by
Minnesota Rubber and Plastics