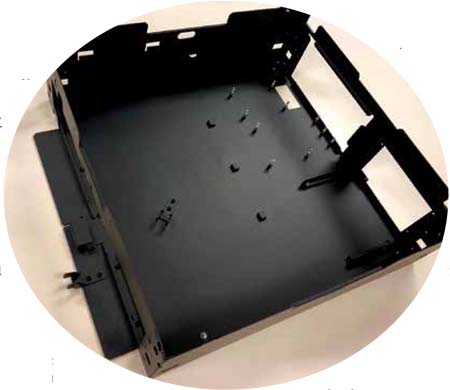 This 3D printer chassis started as a flat piece of 18-gauge cold rolled steel. By completion, GP Precision had added 11 parts and 41 pieces of hardware. Photo by Mark Langlois.

At GP Precision Sheet Metal Fabricators, the Cincinnati CL-940 fiber laser cutter reduced set-up times from an hour on the punch press to a few minutes. The edge quality is cleaner and requires less deburring.

“The laser quality is higher,” said Dennis Collinson, GP Precision’s vice president of sales and marketing and an employee since 1992. “The set-up could be five minutes and there’s less deburring with a laser.”

For faster deburring, GP Precision uses a Fladder AUT 1000, on which a moving belt carries parts under a series of rotating brushes that remove the burrs. Other deburring options include the Timesaver 36-inch, along with two Rosler 220 Liter Rotary tumblers. These are all time savers because in the old days, workers deburred parts by hand, one at a time.

When GP Precision Sheet Metal Fabricators was founded in 1966, workers used mechanical tools without CNC controls, and they didn’t have the advantage of the higher quality, ISO-certified metal fabricating processes. They had no lasers. Today, the Cincinnati CL-940 holds a tolerance of plus or minus 0.001-inch.

Another modern improvement is that GP Precision’s nesting software lowers material costs by finding the most economical way to lay out (nest) parts in a sheet of steel, stainless steel, or aluminum. Most sheets are 48 inches by 96 inches, but the lasers can accommodate sheets up to 60 inches by 120 inches.

The firm’s enterprise resource planning (ERP) software tracks each part as it moves through the company, from order placement to raw material ordering and purchasing, through preliminary engineering, to parts layout, through punching, lasering, deburring, bending, finishing, assembly, and shipping.

“We can go back and look at what happened on what day–what was done by which operator, so we can identify what happened if there was a problem,” Collinson said. The system also records work hours, so GP Precision knows what a part costs to make. “A lot of our competitors don’t know the true costs of their products. With our ERP system, we know what every part cost.”

“Each operator will log into our ERP software when they start an operation, and then log out when done,” said Seth Cubbage, company president. “This will give us the total time worked on it… I could compare the time they spent to our quoted time, or to the time spent on a previous order.”

This is the new ERP program. Owner Arthur Cubbage wrote GP Precision’s first ERP system in the late 1980s on a Tandy computer. Cubbage’s program worked until it was replaced in 2009 by a more internet- and e-mail friendly version. 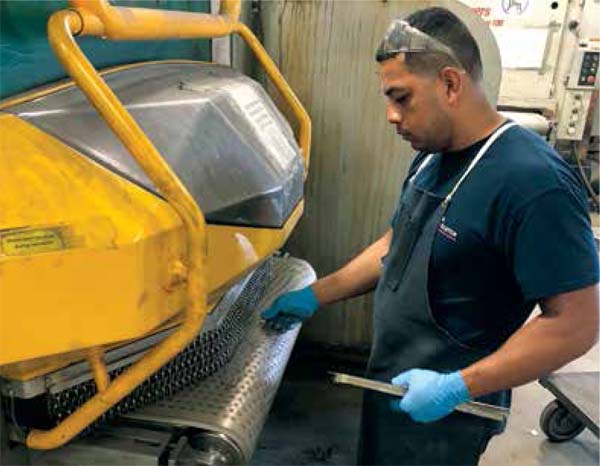 The ERP system is one of the reasons why GP Precision can deliver parts on time more than 99 percent of the time. “Our ERP software allows us to estimate how long a job will take, and we schedule it,” Seth Cubbage said. “We don’t overbook our jobs or how long everyone works. If we’re booked, we won’t squeeze it in. Before we put an order in, we check the schedule to see if there is a spot where we can put it.”

That doesn’t mean they turn away work. It means they negotiate with a customer on their deadline. A customer might ask for an earlier date, and GP Precision will guarantee a later date, but then start to negotiate to accommodate that earlier date. It may require juggling the schedule and talking it over with suppliers or customers.

“What we say is, we’ll try to hit the date you want, but this is the date we’ll put on our work order,” Collinson said. “We have a pretty good rapport with our customers. We talk to them. Things happen–material doesn’t show up, people get sick, or a machine breaks. The majority of the parts we make get plated or painted or screened. Our plater gets a week. Our painter gets a week and a half. If we ask for them to do it in a little less time, they work with us. Our return customers understand there’s a lead time and they’re comfortable working with our schedule.”

While many parts are metal boxes called enclosures, some parts are so challenging, special steps are required. GP Precision’s engineers prototyped one complicated computer chassis rear panel before bidding the job to make sure it could be manufactured. Formed in steel, it was more air than metal by the time GP Precision punched 800 holes in it.

The part was a 15-inch steel rear panel on a computer chassis with folded sides that tucked into the main chassis. Only the barest threads of metal separated the holes when finished. In addition to the roughly 800 holes punched into the panel to vent hot air, GP cut another nine holes roughly an inch or 1.5-inch in size for power cords and other wire connections. Above each wire’s opening were four tiny rectangles precisely located for light-based connections. Upon completion, the part was so spiderweb-like, it felt like aluminum, not steel.

“It’s perforated all over. There’s barely any material between the holes,” Seth Cubbage said. “Before confirming the order for our customer, we ran a test to confirm that we could process the part. We would not take an order unless we were certain we could fabricate it.”

Cubbage said their fear was the punch press would mangle and twist it. GP Precision made about 150 of the rear chassis, and precision was essential for each one. “There are light tubes that line up with four holes over each plug. They all must line up. It was critical.”

On another job for a 3D printer company, GP Precision made more than 8,000 chassis from cold-rolled steel that was originally designed as one piece in the shape of a cross, like an unfolded cardboard box. “This was the base to their biggest printer,” Cubbage said.

To start the job, GP Precision was simply laser cutting the piece of 18-gauge cold rolled steel into a cross shape. The sides folded up to form the box. The problem was that before folding it, numerous additional operations were required. The design called for cut-outs and brackets that had to be riveted to it. The additional work included cutting dozens of holes and adding louvers.

In the end, it included 11 parts plus another 41 pieces of installed hardware. Many of them were PEM® pieces with threads that were attached to the sheet metal chassis using one of GP Precision’s Haeger 824 insertion machines. The threads had to be masked before powder coating. 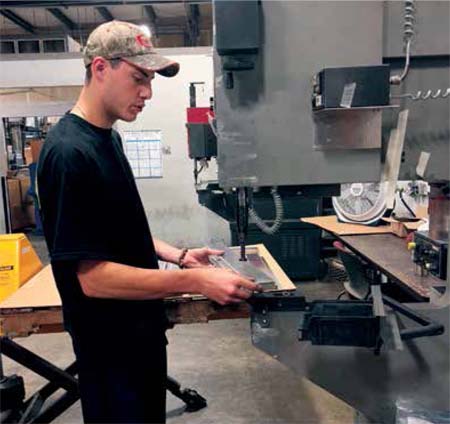 After experimenting with it, GP Precision told the customer it could save money if GP Precision cut the larger cross into three separate pieces. Although working with three pieces rather than one sounds more complicated, it wasn’t, because each piece needed numerous other processes before they were assembled. Those smaller pieces were easier to shape. After performing all the additional operations, the pieces would assemble into the required box shape. “Making the part out of three pieces made it easier to hold and it saved on materials,” Cubbage said.

When the chassis was completely assembled, the PEM fasteners acted like threads on a nut to hold a bolt in place. By using the company’s nesting software, three parts were more economical than one. Separating the sides at the start made it easier to complete those numerous steps.

“We got into making thousands of parts for them,” Cubbage said. “It was over one million parts in four years.”

GP Precision Sheet Metal Fabricators (https://www.gpsheetmetal.com/) is located on Sand Shore Road in Hackettstown, New Jersey, about 45 miles from New York City. The firm occupies about 25,000 square feet. “Our typical lot size ranges from 50 to 75 pieces, though we can make from one piece to thousands of pieces per lot,” Cubbage said. GP Precision is ISO 9001:2015 certified.

Cubbage said GP Precision has roughly 150 customers from a range of industries, with no one industry accounting for more than 15 percent of sales. In the last year, the semiconductor industry started slowly in January and February for four of the company’s eight semiconductor customers, but it picked up for all eight by May. Other industries include power supplies, fiber optics, audio and broadcasting, laboratory test equipment, medical, home automation, telecommunications, 3D printing, and power.

“We have customers that are one-man shops to Fortune 500 companies. We’ve had some of those small companies develop into hundreds of thousands of dollars in business. You can’t always judge a book by its cover,” Collinson said.

Every Manufacturer Needs an Emergency Room

GP Precision allocates several hours every day for customers who have an emergency. This is called ER, for “emergency room,” and customers pay a premium, depending on the part and the circumstances. It works for a prototype needed immediately or for some short run projects. The ERP software allows for this flexibility while maintaining deadlines and quality.

“We’ll do what we can to help our customers out,” Collinson said. If a typical job takes four to six weeks, an ER job is put through in one to three weeks. “Our typical router paper is white. The ER one is red. It goes to the top of every pile in the shop. That becomes the highest priority.”

Priority means Collinson or someone else might drive the finished part to the customer. A finishing service that usually takes five days comes back in two. The company’s painter knows at the beginning of each week what orders to expect in the next four weeks. That painter is willing to accommodate an ER project, if possible.

“We back it up. At least 80 percent of the time, we can accommodate the customer’s request. We do not commit to the expedite date if we cannot do it,” Collinson said.

GP Precision offers design assistance in different scenarios, Cubbage said. “We’ve had customers come in with a pile of parts and ask us to help design an enclosure to hold them. They eventually review the design and sign off on it before production begins. There are other times when we suspect errors in a customer’s supplied drawing. We saved customers thousands of dollars by pointing this out to them and correcting it before production began,” he said.

GP Precision empowers employees to think while they work. An engineering change notice (ECN) might arise during manufacturing when a worker in any department figures out a better way to make a part. The worker follows the established process but marks up the paperwork in the ERP to let engineers know, before another run, that there may be a faster or better way to make the part. Engineering and estimating then review the idea.

“If somebody comes up with a better way to do something, we will update our work instructions,” Cubbage said. “Then everyone will follow this process in the future.”

The firm employs 37 people, and people tend to stay with the firm and cross train into new, more difficult jobs. Workers have an average of nearly 13 years on the job. Two of the company’s engineers joined the firm after earning mechanical engineering degrees in college, and five others worked their way up on the shop floor, learning their skills task by task.

“We have a lot of hands-on experience,” Collinson said. “Our people are the most important part of GP Precision. Most of our people are cross-trained and they have a skill level they’re rated on, things they can and cannot do. We move people around inside the organization.”

Steel and aluminum tariffs that arose in 2018 created some bad feelings among customers. In one case, the cost of one part rose $9. “He called up screaming at me,” Collinson said. That was especially annoying because a U.S. Senator defended the tariffs by saying it might raise the cost of a soda can by a penny. “We’re not making soda cans,” Collinson said.