This technical information has been contributed by
Molex 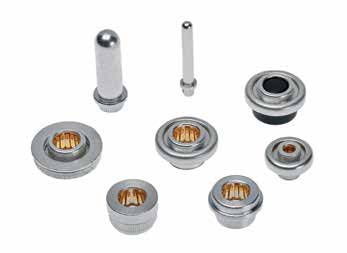 The Coeur CST High-Current Interconnect System delivers between 30.0 and 200.0A of current and offers a wide range of configurations to accommodate PCB, bus bar, and wire. Image courtesy of Molex.

"It is difficult to have perfect pin-to-socket alignment when mating two rigid PCBs or bus bars," said Jeff Gaumer, global product manager for Molex, in a press release. "In the Coeur CST High-Current Interconnect System, our design allows for the entire core socket assembly to move within an outer housing, preventing potential overstress damage to the contacts. This makes Coeur CST ideal for applications where the need for float is critical for power distribution mechanical packaging."

The unique float design provides 1.00mm of axial float, according to Molex. In addition, the Coeur CST High-Current Interconnect System is compact in size, allowing for a mated board-to-board profile as low as 5.00mm that doesn't require a large protrusion above or below the mated boards. The system also offers sockets with or without the float feature.

The wire-to-board and wire-to-wire Coeur CST interconnect systems will include male and female crimp contacts, single and multi-row housings with features such as touch safe, mate-first-last-break option, positive latching, and panel-mount options. They will also include vertical and right-angle configurations, and PCB and bus bar mounting header options, the company said.

This technical information has been contributed by
Molex