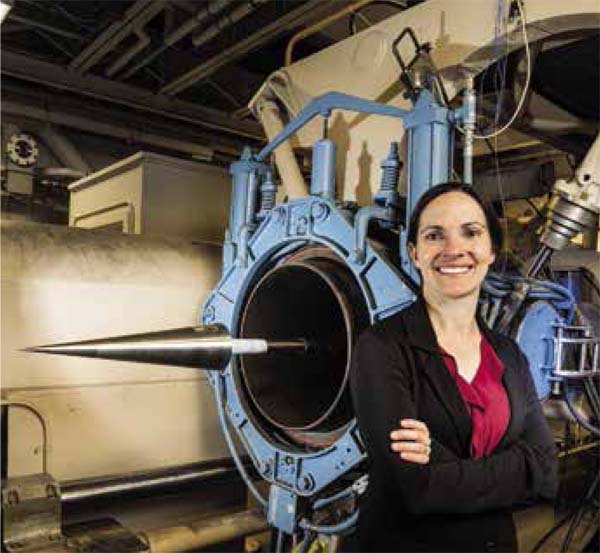 ALBUQUERQUE, N.M. – When traveling at five times the speed of sound or faster, the tiniest bit of turbulence is more than a bump in the road, said the Sandia National Laboratories aerospace engineer who, for the first time, characterized the vibrational effect of the pressure field beneath one of these tiny hypersonic turbulent spots.

“The problem is that these patches of turbulence are really fast and really small,” said researcher Katya Casper. “There are thousands of turbulent spots every second in hypersonic flow, and we need really fast techniques to study their behavior.”

The pressure field is key to understanding how intermittent turbulent spots shake an aircraft flying at Mach 5 or greater, Casper said. Hypersonic vehicles are subjected to high levels of fluctuating pressures and must be engineered to withstand the resulting vibrations. Simply put, being able to characterize and predict these pressure spots leads to better vehicle design.

Over the past several years, Casper’s experiments have progressed from the use of miniature electronic sensors to advanced imaging techniques with pressure-sensitive paint, which is applied to a model tested in a wind tunnel and viewed by specialized cameras to measure the pressure fluctuations optically.

The American Institute of Aeronautics and Astronautics recently cited Casper’s breakthrough in characterizing hypersonic turbulent spots and her work with novel fluctuating pressure instrumentation when announcing, earlier this year, she had won the organization’s Lawrence Sperry Award, given for notable contributions in the field by a person age 35 or younger.

Casper’s experiments characterizing hypersonic turbulent spots used innovative diagnostic techniques to provide insight into the interaction between pressure fluctuations and vehicle structural response. With advanced imaging techniques and high-speed sensors, the work showed that transitional pressure fluctuations are generated by intermittent turbulent spots that pass by in a millisecond. As the spots grow, they merge into a fully turbulent layer. The data Casper captured was instrumental in improving predictive computer simulations developed by her colleagues at Sandia.

Using a cone-shaped model with an integrated thin panel embedded with pressure sensors and accelerometers at Sandia’s hypersonic wind tunnel, Casper studied the response, or vibration, to turbulent spots.

The pressure footprint of one hypersonic turbulent spot at Mach 6. As turbulent air flows over an object, thousands of such spots occur every second, causing severe vibration. Graphic courtesy of Katya Casper.

When the frequency of the passing turbulent spots matched the natural structural frequency of the panel, strong resonance was generated with vibration levels more than 200 times larger than when the spots were mismatched to the panel, she said. “This would be a worst-case scenario for the flight.” Now engineers have an improved means of predicting such a scenario and adapting to it.

A lot of Casper’s work occurs at Sandia’s wind tunnels, but it doesn’t stop there. Last year, Casper migrated similar pressure diagnostics to Sandia’s blast tube to demonstrate, in larger field tests, the pressure-sensitive paint technique first used in the wind tunnels. She combined intricate lighting, high-speed cameras, and the carefully formulated chemistry of pressure-sensitive paint to capture the effect of a shock wave rolling across a vehicle.

Like the turbulent spots in the wind tunnel, the shock wave creates unsteady pressure loading that can vibrate a flight vehicle.

With an explosive charge detonated at one end of the 6-foot diameter blast tube, a shock wave travels through the tube before hitting a model at the other end. Traditionally, hundreds of small pressure sensors would be placed on the model to measure the force. Instead, Casper proposed using pressure-sensitive paint.

“With sensors, you can only get pressure readings at the discrete locations of where they’re placed,” Casper said. “With the paint you can get data everywhere.”

In August, the paint was airbrushed on a model nose cone. Four high-powered, water-cooled ultraviolet lights were shone on the pressure-sensitive paint, causing it to fluoresce. The more oxygen the paint is exposed to, the less it fluoresces. The greater the pressure, the greater the oxygen. So, as the shock wave from the blast passed over the model, increasing pressure on its surface, the intensity of the paint’s glow decreased.

Caught on a high-speed camera shooting at 25 kilohertz (or 25,000 cycles per second) with a filter used to block the ultraviolet lighting, the result is a dark shadow growing over the model from the tip to the base; and then, as a reflected shock passes by, the shadow encroaches from base to tip.

The change in the paint’s florescence can be calibrated to the amount of pressure exerted on the model.

Casper and team conducted eight blast tube runs over two days and learned a few valuable lessons from the first-of-their kind tests. For example, the tests collect better data when it’s dark, or at least cloudy, as sunlight interferes with the paint’s fluorescence.

“It’s a new approach for measuring pressure taken to the blast tube,” she said. “Overall, the tests were successful, and, with a few adjustments, should ultimately be useful in determining how to protect objects from shock waves.”