This technical information has been contributed by
MIPI Alliance 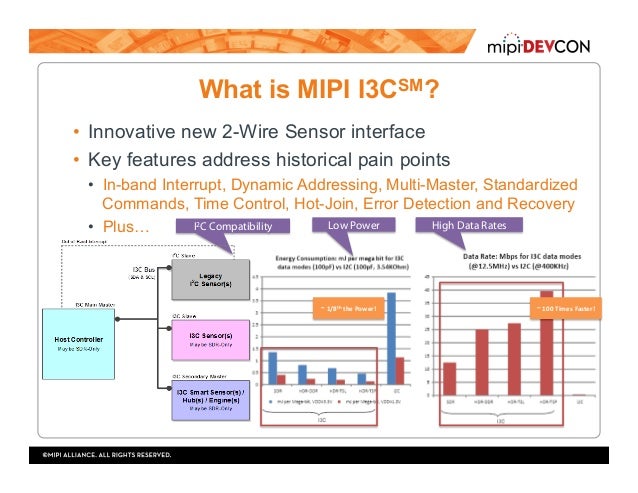 Joel Huloux, chairman of the board of MIPI Alliance, called the release of MIPI I3C an important milestone for the MIPI Alliance and the developer community. "It brings together multiple sensor interface approaches around a unifying specification that provides conveniences and system-level benefits for many applications," said Huloux in a prepared release.  "We expect MIPI I3C will play a fundamental role in expanding opportunities for sensor-based applications in mobile, mobile-influenced, and embedded systems markets."

The MIPI I3C specification supports the adoption and proliferation of sensors in mobile-connected products. Besides making it easier to integrate sensors in small space-constrained form factors, it is said to alleviate interface fragmentation, help minimize pin count, and control system-wide energy consumption. The specification gives developers a greater choice of design options, reduces system-level implementation costs, and helps shorten time-to-market for new applications, according to the MIPI Alliance.

It delivers these benefits by incorporating, consolidating, and advancing I2C, SPI, and UART with a new approach. The solution is described as a "comprehensive and scalable" one that "provides a superset of features and functionalities while supporting legacy devices."

"The unified approach of MIPI I3C provides many strategic advantages for developers," said Rick Wietfeldt, chair of the MIPI Alliance Technical Steering Group, in the release. "For example, with MIPI I3C, most types of I2C devices can coexist with I3C devices on the same bus, enabling vendors to migrate current I2C designs to the new standard. Likewise, newly designed MIPI I3C devices can work on existing legacy I2C buses."

According to the Alliance, MIPI I3C specifies a chip-to-chip interface that can connect all sensors in a device to the application processor. It is implemented on a standard CMOS I/O using two wires, and can be used to build smartphones, virtual-reality head-mounted devices, robot drones, medical instruments, autonomous vehicles, industrial equipment, all-in-one computers, and TV remotes, among others.

The specification supports numerous sensor classifications and functions, including accelerometers, touch screens, time-of-flight cameras, sonic/ultrasonic sensors, transducers, actuators, and others. MIPI I3C also supports a range of biometric sensors and environmental sensors and can be used to interface sensors used for near-field communications, haptics feedback, and infrared or ultraviolet sensing.

Although MIPI I3C was originally developed to meet the needs of sensor applications, it can also be applied anywhere low-to-medium bandwidth devices benefitting from integrated data and control via byte-based transmission are found, such as power management and control interfaces. In addition, MIPI I3C will be utilized in other MIPI specifications under development, including MIPI Touch and MIPI Debug for I3C. MIPI Alliance welcomes industry participation in this work and invites member companies to collaborate in the creation of these forthcoming specifications.

This technical information has been contributed by
MIPI Alliance