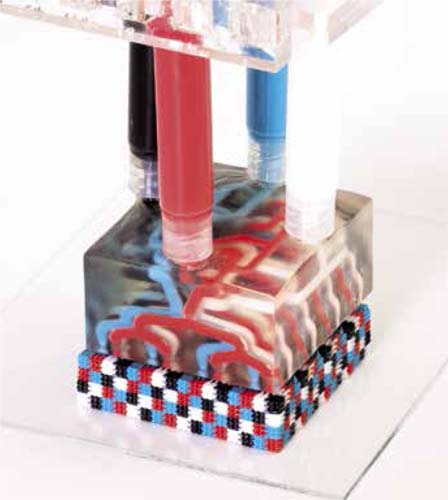 (CAMBRIDGE, Mass.) – 3D printers are revolutionizing manufacturing by allowing users to create any physical shape they can imagine on-demand. However, most commercial printers are only able to build objects from a single material at a time, and inkjet printers that are capable of multi-material printing are constrained by the physics of droplet formation. Extrusion-based 3D printing allows a broad palette of materials to be printed, but the process is extremely slow.

For example, it would take roughly 10 days to build a 3D object roughly one liter in volume at the resolution of a human hair and print speed of 10 cm/s using a single-nozzle, single-material printhead. To build the same object in less than one day, one would need to implement a printhead with 16 nozzles printing simultaneously! 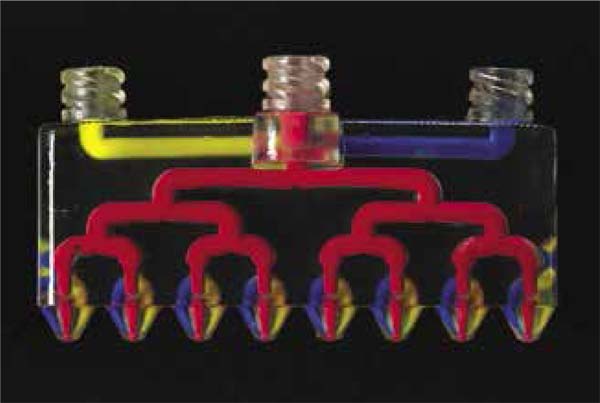 The printhead can accommodate multiple nozzles, each of which can print up to eight different materials. A series of branched channels distributes the “inks” to the nozzles. Photo courtesy of Wyss Institute at Harvard University.

Now, a new technique called multi-material multi-nozzle 3D (MM3D) printing, developed at Harvard’s Wyss Institute for Biologically Inspired Engineering and John A. Paulson School of Engineering and Applied Sciences (SEAS), uses high-speed pressure valves to achieve rapid, continuous, and seamless switching between up to eight different printing materials. The technique enables the creation of complex shapes in a fraction of the time currently required using printheads that range from a single nozzle to large multi-nozzle arrays. These 3D printheads themselves are manufactured using 3D printing, enabling their rapid customization and facilitating adoption by others in the fabrication community.

Each nozzle is capable of switching materials at up to 50 times per second, which is faster than the eye can see, or about as fast as a hummingbird beats its wings. The research is reported in Nature.

“When printing an object using a conventional extrusion-based 3D printer, the time required to print it scales cubically with the length of the object, because the printing nozzle has to move in three dimensions rather than just one,” said co-first author Mark Skylar-Scott, Ph.D., a Research Associate at the Wyss Institute. “MM3D’s combination of multi-nozzle arrays, with the ability to switch between multiple inks rapidly, effectively eliminates the time lost to switching printheads and helps get the scaling law down from cubic to linear, so you can print multi-material, periodic 3D objects much more quickly.”

The key to MM3D printing’s speedy ink-switching is a series of Y-shaped junctions inside the printhead where multiple ink channels come together at a single output nozzle. 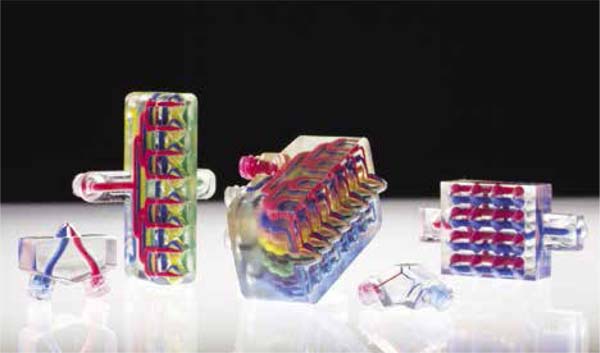 Rapid switching between inks is achieved thanks to special Y-shaped junctions in each nozzle (far left) that are precisely tuned to prevent mixing or backflow of the inks during printing. The junctions can be multiplexed for larger printing jobs, and can be customized to account for materials with different physical properties (second from right). Photo courtesy of Wyss Institute at Harvard University.

The shape of the nozzle, printing pressure, and ink viscosity are all precisely calculated and tuned so that when pressure is applied to one of the “arms” of the junction, the ink that flows down through that arm does not cause the static ink in the other arm to flow backwards. This prevents the inks from mixing and preserves the quality of the printed object. By operating the printheads using a bank of fast pneumatic valves, this one-way flow behavior allows the rapid assembly of multi-material filaments that flow continuously out from each nozzle, and enables the construction of a 3D multi-material part. The length of the ink channels can also be adjusted to account for materials that have different viscosities and yield stresses, and thus flow more quickly or slowly than other inks.

“Because MM3D printing can produce objects so quickly, one can use reactive materials whose properties change over time, such as epoxies, silicones, polyurethanes, or bio-inks,” said co-first author Jochen Mueller, Ph.D., a Research Fellow at the Wyss Institute and SEAS. “One can also readily integrate materials with disparate properties to create origami-like architectures or soft robots that contain both stiff and flexible elements.”

To demonstrate their technique, the researchers printed a Miura origami structure composed of stiff “panel” sections connected by highly flexible “hinge” sections. Previous methods of building such a structure require manually assembling them together into stacked layers. The MM3D printhead was able to print the entire object in a single step by using eight nozzles to continuously extrude two alternating epoxy inks whose stiffnesses differed by four orders of magnitude after being cured. The hinges withstood over 1,000 folding cycles before failing, indicating the high quality of the transitions between the stiff and flexible materials achieved during printing.

The MM3D printing can also be used to create more complex objects, including actuating robots.

The research team designed and printed a soft robot composed of rigid and soft elastomers in a millipede-like pattern that included embedded pneumatic channels that enable the soft “muscles” to be compressed sequentially by a vacuum, making the robot “walk.” The robot was able to move at nearly half an inch per second while carrying a load eight times its own weight, and could be connected to other robots to carry heavier loads.

“This method enables the rapid design and fabrication of voxelated matter, which is an emerging paradigm in our field,” said corresponding author Jennifer A. Lewis, Sc.D., who is a Core Faculty Member at the Wyss Institute and the Hansjörg Wyss Professor of Biologically Inspired Engineering at SEAS. “Using our broad palette of functional, structural, and biological inks, disparate materials can now be seamlessly integrated into 3D-printed objects on-demand.” 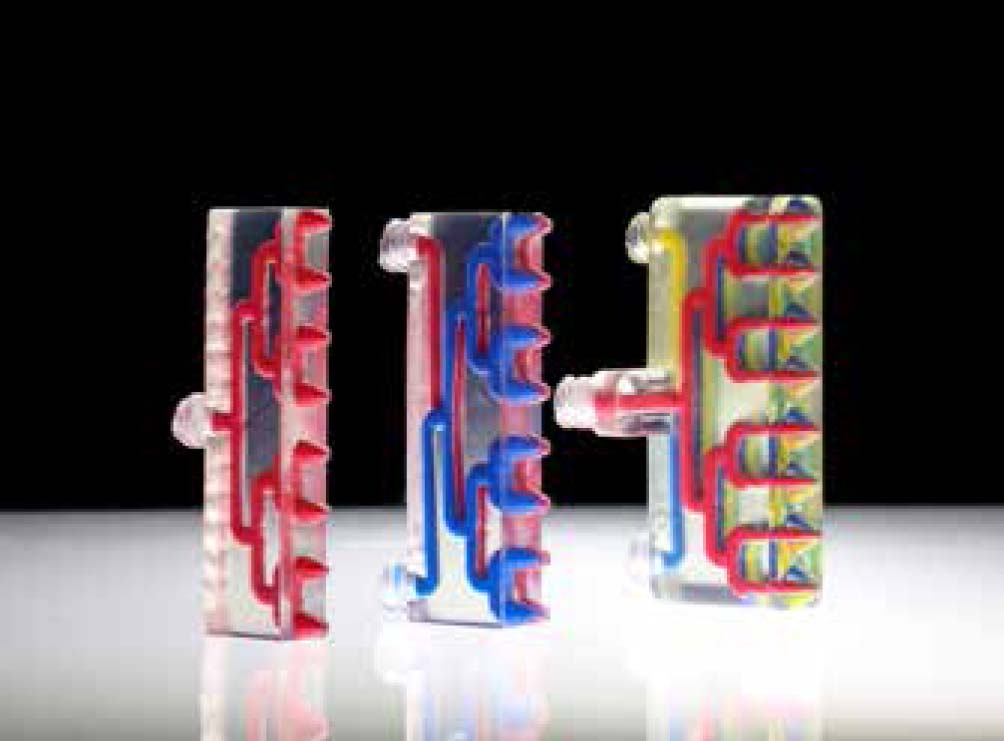 “MM3D’s combination of multi-nozzle arrays, with the ability to switch between multiple inks rapidly, effectively eliminates the time lost to switching printheads and helps get the scaling law down from cubic to linear, so you can print multi-material, periodic 3D objects much more quickly,” said co-first author Mark Skylar-Scott, Ph.D., a Research Associate at the Wyss Institute.

Importantly, current MM3D printheads can only print periodic (i.e., repeating) parts. But the team envisions that MM3D printing will continue to evolve, eventually featuring nozzles that can extrude different inks at different times, smaller nozzles for greater resolution, and even larger arrays for rapid, single-step 3D printing at a wide range of size and resolution scales. They are also exploring the use of sacrificial inks to create even more complex shapes.

“3D printing is revolutionizing the manufacturing industry by allowing people to create without the need for expensive machinery and raw materials, and this new advance promises to dramatically improve the pace of innovation in this exciting area,” said Wyss Founding Director Donald Ingber, M.D., Ph.D., who is also the Judah Folkman Professor of Vascular Biology at Harvard Medical School and the Vascular Biology Program at Boston Children’s Hospital, as well as Professor of Bioengineering at SEAS.

Claas Visser, a former Postdoctoral Fellow at the Wyss Institute and SEAS, also contributed to this work. The research was supported by the Vannevar Bush Faculty Fellowship Program through the Office of Naval Research, the National Science Foundation (Harvard MRSEC), and the GETTYLAB.

The Wyss Institute for Biologically Inspired Engineering at Harvard University (http://wyss.harvard.edu) uses Nature’s design principles to develop bio-inspired materials and devices that will transform medicine and create a more sustainable world. Wyss researchers are developing innovative new engineering solutions for healthcare, energy, architecture, robotics, and manufacturing that are translated into commercial products and therapies through collaborations with clinical investigators, corporate alliances, and formation of new startups.

The Harvard John A. Paulson School of Engineering and Applied Sciences (http://seas.harvard.edu) serves as the connector and integrator of Harvard’s teaching and research efforts in engineering, applied sciences, and technology. Through collaboration with researchers from all parts of Harvard, other universities, and corporate and foundational partners, it brings discovery and innovation directly to bear on improving human life and society.

Lindsay Brownell is a science writer for the Wyss Institute for Biologically Inspired Engineering at Harvard University.