BELLINGHAM, Wash.–Enhancing astronomers' ability to peer ever more deeply into the cosmos may hinge on developing larger space-based telescopes. A new concept in space telescope design makes use of a modular structure and an assembly robot to build an extremely large telescope in space, performing tasks in which astronaut fatigue would be a problem.

The robotically assembled modular space telescope (RAMST) design is described by Nicolas Lee and his colleagues at the California Institute of Technology and the Jet Propulsion Laboratory in an article published in July by SPIE, the international society for optics and photonics, in the Journal of Astronomical Telescopes, Instruments, and Systems (JATIS).

Ground-based telescopes are limited by atmospheric effects and by their fixed location on the Earth. Space-based telescopes do not have those disadvantages, but have other limits, such as overall launch vehicle volume and mass capacity. Design of a modular space telescope that overcomes restrictions on volume and mass could allow telescope components to be launched incrementally, enabling the design and deployment of extremely large space telescopes.

The design detailed by Lee and his colleagues in "Architecture for in-space robotic assembly of a modular space telescope," focuses primarily on a robotic system to perform tasks in which astronaut fatigue would be a problem.

"Our goal is to address the principal technical challenges associated with such an architecture, so that future concept studies addressing a particular science driver can consider robotically assembled telescopes in their trade space," the authors wrote.

The main features of the authors' proposed architecture include a mirror built with a modular structure, a robot to put the telescope together and provide ongoing servicing, and advanced metrology technologies to support the assembly and operation of the telescope.

An optional feature is the potential ability to fly the unassembled components of the telescope in formation. The system architecture is scalable to a variety of telescope sizes and would not be limited to particular optical designs.

"The capability to assemble a modular space telescope has other potential applications," said Harley Thronson, senior scientist for Advanced Astrophysics Concepts at NASA's Goddard Space Flight Center, in a press release. "For example, astronomers using major ground-based telescopes are accustomed to many decades of operation, and the Hubble Space Telescope has demonstrated that this is possible in space if astronauts are available. A robotic system of assembly, upgrade, repair, and resupply offers the possibility of very long useful lifetimes of space telescopes of all kinds." 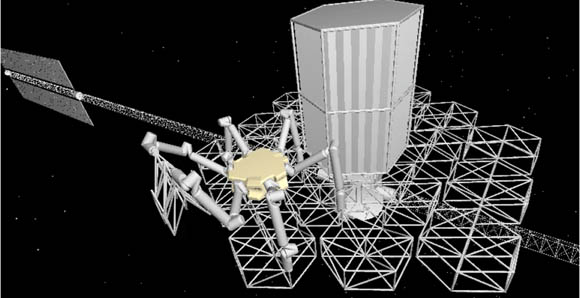 A conceptual CAD rendering of an assembly robot deploying a truss module. Folded truss modules are stored in a cargo housing unit, shown docked to the central hub. Doi:10.117/11.JATIS.2.4.041207 © Image courtesy of SPIE.