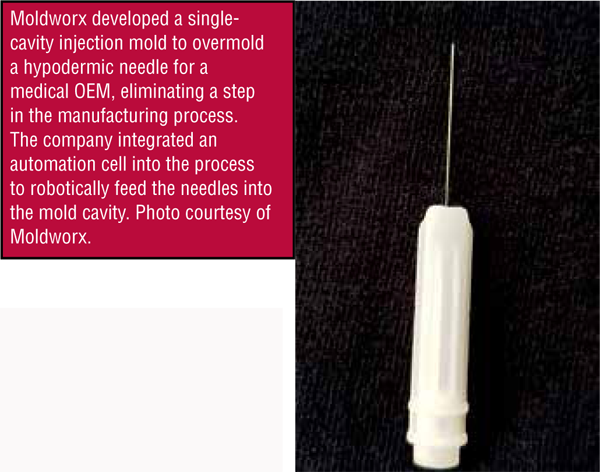 GILBERT, Ariz.–Moldworx is a custom injection molding company that designs and builds molds in-house and can integrate them with automated assembly processes to manufacture molded parts with greater efficiency. Although Moldworx serves customers in a variety of markets, including the construction, agriculture, and pharmaceutical industries, the company has developed a special emphasis on medical device injection molding that includes proof-of-principle trials and production runs of virtually any quantity.

In one recent project for a medical OEM, Moldworx automated the production of hypodermic needles using the overmolding process to reduce costs and improve productivity. The company designed and built not only the molds that would inject medical-grade plastic around stainless steel needles as small as 0.012 inch (0.305 mm), but the automation for the project as well.

“This allowed us to overmold the needle, eliminating a step in the current manufacturing process, and reduce overall production time and cost,” said Moldworx President Jim Taylor, in a company release. “We encountered some unique issues in the process, including the additional challenge of making this all possible in a horizontal press, not a typical vertical press.”

The next stage was designing a production mold and automation that would robotically feed the needles into the mold cavity, eliminating the need for an operator. “We designed the mold to integrate with the automation, and the automation to work in unison with the mold,” explained Taylor. “In an effort to accelerate the timeline, the entire automation cell was built in parallel with the mold.”

Moldworx had to overcome the challenge of singulating thousands of delicate, tiny needles that are bulk-packed. The company designed and developed a “singulator” with a “hopper” that would introduce one needle at a time to the assembly line cell. Each needle is picked up by a robot affixed to the injection molding machine and indexed in front of a set of high-resolution inspection cameras to insure it was not bent or the needle tip was not damaged, which would cause the needle to be rejected.

The needle is then placed into the mold, and the mold closes for the injection cycle. When the mold opens, the robot removes the molded assembly and places a newly inspected needle into the mold. All these actions require inspection and verification, and tolerances must be exact. The motors and controls used in the automated cells are of the highest quality to ensure precision of the process, the company said.

“This is a prime example of the benefits of working with Moldworx,” said Taylor. “We partner with our clients to deliver innovative, automated plastic injection-molding manufacturing solutions.”