This technical information has been contributed by
HES Energy Systems


Multi-rotor Drone Can Fly for More than 3 Hours, Company Says 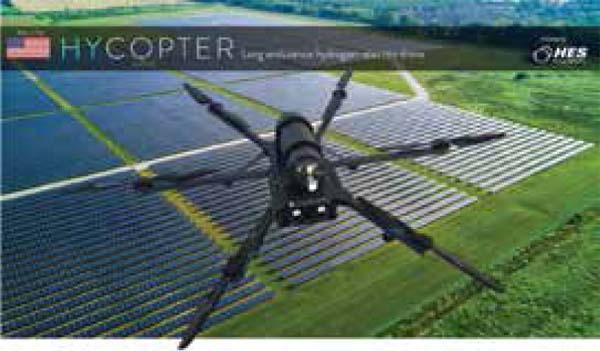 The Hycopter is a hydrogen multi-rotor drone that is said to be capable of flight durations of up to three and a half hours. (Photo: Business Wire)

AUSTIN, Texas, PARIS, and SINGAPORE–The quest to lengthen the durations of flights is one of the final frontiers in drone technology, one that HES Energy Systems has long focused on. With the commercial launch of its Hycopter, a hydrogen multi-rotor drone designed for large-scale industrial maintenance inspections, HES has introduced an industrial-grade drone designed to keep precision cameras and other sensors in the air much longer.

The launch comes after a decade of working on various UAV programs and with leading aerospace institutions around the world, striving to push the limits of energy storage technology. HES produces light, compact fuel cell systems, which can be as much as five times lighter than lithium batteries, the company said in a release. HES reported that it is currently capable of over 700Wh/kg system-level specific energy and is working to push this limit even further. The company has merged its core technologies with a specially adapted multi-rotor design to extend flight durations up to 3.5 hours, versus the typical 20-to-30 minutes when using lithium batteries, the company said.

Hycopter includes a new 140g pressure regulator that is said to be capable of reducing hydrogen pressure from 350 bar to 0.5 bar. Other system components include specially designed HES fuel cell stacks capable of generating over 1W per gram. Hycopter was designed in Austin, Texas, where HES is currently setting up a local production base.

Hycopter can recharge in minutes using bottled industrial-grade hydrogen from local hydrogen suppliers. With further improvements, Hycopter-type platforms could also enable product deliveries over much longer distances than are possible today. In the future, long range cargo drones would be deployed from autonomous hydrogen “drone ports,” according to HES.

The company said that versions of Hycopter will emerge next in transitional wing VTOL applications. The same HES core technology is now being scaled up to power manned electric aviation, as well as other aerial mobility platforms under discussion with various international aerospace companies.

This technical information has been contributed by
HES Energy Systems