This technical information has been contributed by
Lockheed Martin 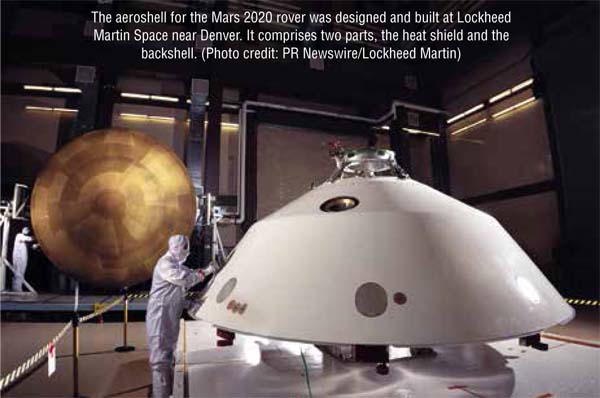 The aeroshell for the Mars 2020 rover was designed and built at Lockheed Martin Space near Denver. It comprises two parts, the heat shield and the backshell. (Photo credit: PR Newswire/Lockheed Martin)

DENVER–The capsule-shaped aeroshell that will protect NASA’s Mars 2020 rover was delivered to NASA’s Kennedy Space Center, Florida, in December. Built by Lockheed Martin, the aeroshell will encapsulate and protect the Mars 2020 rover during its deep space cruise to Mars. It will also protect the rover from intense heat as the entry system descends through the Martian atmosphere to the surface of Mars.

Because of the large mass and unique entry trajectory profile that could create external temperatures up to 3,800 degrees Fahrenheit, the heat shield uses a tiled phenolic- impregnated carbon ablator (PICA) thermal protection system instead of the Mars heritage Super Lightweight Ablator (SLA) 561V. This will only be the second time PICA has flown on a Mars mission.

“Even though we have the experience of building the nearly identical aeroshell for the Curiosity Rover, the almost 15-foot diameter composite structure was just as big a challenge to build and test 10 years later,” said Neil Tice, Mars 2020 aeroshell program manager at Lockheed Martin Space, in a press release. “We’ve built every Mars aeroshell entry system for NASA of its 40 years of exploring Mars, so we pulled from that experience to build this important system.”

The backshell and heat shield were transported from Lockheed Martin’s Waterton facility in Littleton, Colorado, where they were built, to nearby Buckley Air Force Base. They were then loaded onto an Air Force transport plane and flown to NASA’s Kennedy Space Center.

Lockheed Martin integrated the MSL Entry Descent and Landing Instrument (MEDLI2) onto the heat shield and backshell. Provided by NASA’s Langley and Ames Research Centers, MEDLI2 will collect temperature and pressure data during the spacecraft’s descent through the Martian atmosphere.

The Mars 2020 rover is in testing at NASA’s Jet Propulsion Laboratory (Pasadena, California), which manages the Mars 2020 project for the NASA Science Mission Directorate, Washington. The mission will launch in July 2020 and land on Mars in February 2021 at the Jezero Crater.

This technical information has been contributed by
Lockheed Martin