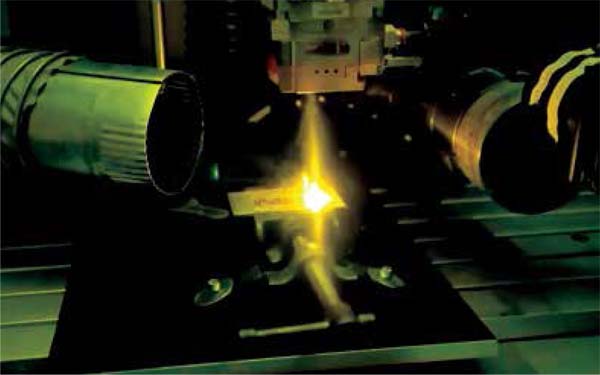 In celebration of National Welding Month, NIST scientists discussed their ambitious project to understand the basic principles of laser welding better than ever before.

On its surface, the work is deceptively simple: Shoot a high-power laser beam onto a piece of metal for a fraction of a second and see what happens. But researchers say the physics of laser welding is surprisingly complex. A better understanding of the interaction between laser and metal could give industry more control over laser welding, a technology that is becoming increasingly popular in manufacturing.

For the past three years, scientists at the National Institute of Standards and Technology (NIST) have been collecting data on the most fundamental aspects of laser welding. The scope of their study is narrow, but the measurements of this complicated process are more accurate and comprehensive than any data ever collected on the subject, the researchers say.

Now, this information is starting to be used by computer modelers to improve simulations of laser welding processes, a necessary step to prepare the work for industry.

“Our results are now mature enough to where academic researchers are starting to use our data to thoroughly test their computer models in a way that they just haven’t been able to do before, because this kind of data hasn’t been available,” said NIST physicist Brian Simonds.

Welding is necessary for many industrial processes, from building cars and airplanes to laptops and cellphones. Conventional welding typically uses an arc of electricity to heat and fuse materials. In contrast, a multi-kilowatt laser beam can heat a smaller area of the metals being joined, creating a smaller, smoother seam than a conventional weld, on the order of millimeters rather than centimeters. Laser welding is also faster and more energy-efficient than conventional welding, the researchers say.

Even with these and other advantages, laser welding makes up only a small fraction of overall welding efforts in the U.S. that might benefit from this technique. A better understanding of the process could make it easier for industries to consider investing in laser-welding infrastructure, the researchers said.

“The ultimate goal for industry is that one day, if you have an idea about something you want to make, you dump it into a computer and the computer tells you exactly how to make it,” Simonds said. Though that ideal is a decade or more away, he continued, manufacturers may start seeing a benefit much sooner, as the NIST collaboration’s progress helps refine the computer models.

If manufacturers want to weld two pieces of an unfamiliar alloy of metal, they might use trial and error to figure out which combination of laser settings will produce the best weld for their application. But most manufacturers would prefer to streamline the research process and move into production as quickly as possible.

That’s where computer models come in. These simulations help manufacturers predict what kinds of welds they can expect with different settings.

To make the models, though, researchers need data from past experiments. And at the moment, that research is spread across hundreds of studies, representing decades of work from dozens of laboratories. For example, they might find information about the heat capacity of one alloy in a paper from 1970, the thermal conductivity of a similar alloy in a paper from 1992, and experimental data on weld behavior from 2007. But piecing this information together requires introducing a lot of what Simonds called “fudge factors.”

“Modelers look through all these resources from different labs for different materials, and they kludge them together in a way that they think is most applicable to their experiment,” Simonds said. “And they say, ‘It’s close enough.’ But they don’t really know.”

In contrast, the NIST team is attempting to build a much firmer foundation for a model. NIST researchers are measuring everything that a simulator would need–the amount of power that is hitting the metal, the amount of energy the metal is absorbing, the amount of material that is evaporating from the metal as it is heated–all in real time.

Where No One Has Gone Before

Many of the techniques the researchers are using to collect the data were either designed or developed at NIST to measure novel aspects of welding. For example, until recently, researchers could not gauge laser power during a weld. NIST physicists John Lehman and Paul Williams and their colleagues designed and built a device that can accomplish this using the pressure of the light itself.

They also had to get creative to sense the amount of light absorbed by the heated material, since it changes constantly. “You go from a rough metal to a shiny pool to a deep pocket that is essentially a blackbody,” meaning it absorbs almost all of the light that hits it, Lehman said. The physics, he said, is “super complex.”

To solve this problem, they surrounded the metal sample with a device called an integrating sphere, designed to capture all the light bouncing off the metal. Using this technique, they discovered that the traditional method for making this measurement “severely underestimates” the energy absorbed by the metal during a laser weld. The integrating sphere also allows the data to be measured in real time.

They also found a way to better measure the weld plume, a cloud of vaporized materials that includes tiny amounts of elements that evaporate out of the sample during welding. Detecting the exact amounts of these elements as they leave the weld would give scientists valuable information about the strength of the material that remains. However, traditional techniques fail to accurately sense the concentrations of certain elements, such as carbon and nitrogen, that exist in extremely low concentrations.

To sense these minuscule signals, NIST researchers are adapting a technique called laser-induced fluorescence (LIF) spectroscopy. The method involves hitting the plume with a second laser that targets just one kind of element at a time. The targeted element absorbs the second laser’s energy and then releases it at a slightly shifted energy, producing a strong signal that is also a unique marker of that element. So far, researchers have demonstrated that LIF can sense trace elements in the weld plume with 40,000 times more sensitivity than traditional methods.

Another important aspect of the work is that researchers are conducting all of their experiments with a type of stainless steel that is an NIST standard reference material (SRM), meaning its composition is extremely well known. Using the stainless-steel SRM ensures that experiments conducted anywhere in the world can have access to metal samples with an identical composition, so that everyone is effectively contributing to one big project.

“In 20 years from now, if somebody says, ‘Oh man, I wish they had measured this,’ or some new technique is invented that gives much better data than we can take today, they can go buy the SRM and tie it in to all the research we’ve already done,” Simonds said. “So, it kind of future-proofs what we’re doing.”

As they continue to gather information, the NIST scientists are collaborating with institutes around the world to expand the dataset. This summer, they will collaborate with the U.S. Department of Energy’s Argonne National Laboratory to take advantage of the lab’s unique ability to do high-speed X-ray imaging of the molten pool of metal in real time. Other collaborators include Graz University of Technology in Austria, Queen’s University in Ontario, Canada, and the University of Utah in Salt Lake City.

Simonds and colleagues are also broadening the scope of their work as they direct their high-power laser beams onto metal powders instead of solids. The powder studies should directly support the community of additive manufacturing (a common form of 3D printing), whose market for products and services was worth more than an estimated $7.3 billion in 2017.

NIST researchers say the welding research project is a great opportunity for them to bring their physics chops to a complicated problem.

“I’m surprised how little people understand this thing that is so important, this vital interaction that underpins all of these industrial processes,” Simonds said. “The deeper I look into this very simple problem of what happens when a really intense laser beam hits metal for 10 milliseconds, the more I realize this is some complex stuff. It’s fun to try and understand.”

For more information, NIST offers two videos on its website:

One shows a behind-the-scenes look at some of the work that has gone into NIST’s laser welding program, whose goal is to understand how laser welding works on a fundamental level. Watch a high-power laser melt brick into glass, and see steel stretch like chewing gum in a weld strength test, as NIST scientists explain how this work might someday help manufacturers make products such as cars, airplanes, laptops, and cell phones. Video by Jennifer Lauren Lee/NIST. Music: Blue Dot Sessions (CC By-NC 4.0) and Kevin MacLeod (CC BY 3.0)

Another is a high-speed video that shows a weld made with 360 watts of focused laser power. The laser (not visible) heats the metal until it melts and forms a pool, which then solidifies. The depth of the finished weld is about 470 micrometers (a little less than half a millimeter). Credit: Jack Tanner/NIST

Reprinted with permission of NIST News.