This technical information has been contributed by
Relativity 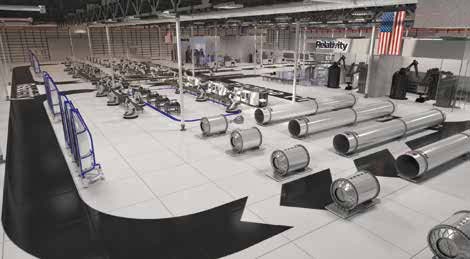 LOS ANGELES–Relativity, a company that says it is taking a fundamentally new approach to designing, building, and flying rockets, is developing the first aerospace platform to integrate machine learning, software, and robotics with metal 3D printing technology to build and launch rockets in days, instead of years. The company recently secured an agreement with the National Aeronautics and Space Administration (NASA) and an incentive package from the Mississippi Development Authority to expand facilities and infrastructure at NASA’s historic Stennis Space Center in Hancock County, Mississippi.

The partnership between Relativity, NASA, and the Mississippi Development Authority is aimed at advancing innovation, economic development, and job growth in the Gulf Coast, as well as Relativity’s leadership in American aerospace development.

Through the agreement, Relativity will leverage valuable existing NASA infrastructure and capital investment incentives from the Mississippi Development Authority to build and integrate a pioneering robotic 3D printing rocket factory and an expanded testing facility for autonomous production of Relativity’s Terran 1 rocket launch vehicles. The agreement with NASA includes exclusive use of 220,000 square feet within building 9101 at Stennis Space Center for a nine-year lease. The facility includes an 80-foot high bay, multiple bridge cranes, and extensive industrial infrastructure.

Relativity, on a path to its first orbital launch in 2020, will be building out first stage assembly, engine integration and testing, and a full 3D printing and robotics-enabled production line at the site. The technologies developed through Relativity’s Stennis Factory site are the first step toward the company’s long-term vision of 3D printing the first rocket made in Mars and expanding the human experience in space. Through the factory build-out and expansion, the company will create a total of 200 jobs and invest $59 million in the state of Mississippi.

Relativity’s autonomous rocket platform is said to be highly reconfigurable, with a radically simplified supply chain and no fixed tooling. As a result, it is said to reduce part count to one-hundredth of the number required by traditional manufacturing. Traditional aerospace manufacturing, on the other hand, relies on fixed tooling, a complex supply chain, and extensive human labor.

The agreement also includes an option to extend the lease for an additional 10 years. Relativity’s partnership with the Mississippi Development Authority is supported by a significant cost reimbursement and tax incentive package for Relativity’s employment and capital investments for advanced aerospace manufacturing and technology development in the State of Mississippi. Relativity will invest in regional workforce development programs, university and education outreach, and community engagement initiatives. The infrastructure and resource incentives are expected to enable the company to accelerate development and scaling of its technology and shorten lead times to launch.

“We are excited to partner with NASA and the Mississippi Development Authority to bring our patented 3D printing rocket platform to Hancock County,” said Jordan Noone, co-founder and CTO of Relativity, in a statement. “We believe this groundbreaking technology is the future of aerospace manufacturing, and we look forward to bringing this innovation to the Gulf Coast.”

“This partnership will foster innovation, investment, and growth in Mississippi,” added Tobias Duschl, vice president of operations at Relativity. “The integration of our 3D printing rocket production and testing facilities at one site will also enable Relativity to offer greater flexibility to commercial and government entities needing faster, more frequent, and lower cost access to space.”

Relativity is accelerating growth of a customer manifest that includes leading global satellite operators, commercial companies, and government payloads. Recently, the company announced customer agreements with Telesat, the renowned global satellite operator, to support its LEO constellation; mu Space, the innovative Thai satellite and space technology company, to launch its first LEO satellite; and Spaceflight, the satellite rideshare and mission management provider, to launch Spaceflight’s dedicated smallsat rideshares. Relativity is reportedly on track to conduct its first orbital test launch at the end of 2020 and enter commercial service in 2021.

“This agreement demonstrates again NASA’s commitment to work with our industry partners to expand commercial access to low-Earth orbit,” said Dr. Rick Gilbrech, director, Stennis Space Center. “This helps NASA maintain focus on the ambitious Artemis program that will land the first female and the next male on the south pole of the moon by 2024. Relativity is a valuable member of the Stennis federal city and we look forward to building on our already successful partnership. This is a significant expansion of their presence at Stennis and we appreciate their confidence in making south Mississippi an integral part of their future.”

With this expansion at Stennis, Relativity is increasing infrastructure fourfold to more than 280,000 square feet of operations, production, testing, and launch facilities, and is on track to reach over 350,000 square feet of space in 2019. In the past year, the company increased team size from 14 to 90 employees.

Relativity (https://www.relativityspace.com/) is reported to be the first autonomous rocket factory. The company’s vision is to build the future of humanity in space, starting with rockets. Relativity’s platform vertically integrates intelligent robotics and 3D autonomous manufacturing technology to build the world’s first entirely 3D printed rocket, Terran 1. The company is backed by investors such as Playground Global, Y Combinator, Social Capital, Phillip Spector, formerly of Intelsat, and Mark Cuban.

This technical information has been contributed by
Relativity