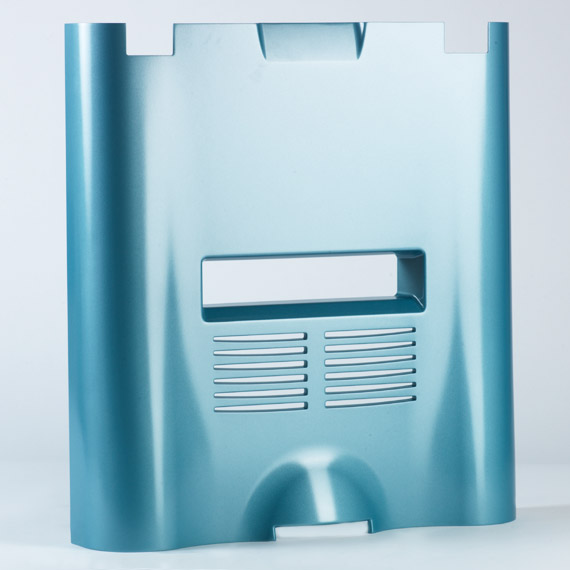 ONTARIO, Calif.—A thermoformed medical device enclosure that was developed for a DNA sequencer about the size of a desktop printer was recently awarded first place in the "Heavy-Gauge, Pressure-Formed" category at the Society of Plastics Engineers (SPE) Thermoforming Division's annual parts competition. Manufactured by custom plastics manufacturer Ray Products, the medical device enclosure reflects the versatility of pressure forming as a process. While some of the enclosure's panels are fairly straightforward, others incorporated complex shapes, undercut features, and deep draw features. These types of features can only be achieved by using CNC-machined aluminum cooled tooling, which Ray Products uses exclusively for pressure forming.

"Lots of people would look at this enclosure and think, 'that has to be injection-molded,'" said Jason Middleton, Ray Products' vice president of sales and development. "This enclosure really demonstrates what's possible with pressure forming, and how Ray Products has embraced technology to get here."

The original project only called for quantities of between 75 and 100 units per year. Ray Products' pressure forming process allowed the client to develop an aesthetically pleasing and RoHS compliant enclosure without the high tooling costs of injection molding. It also allowed the client to bring its product to market months faster than an injection-molded enclosure would have allowed. In a rapidly evolving market like biotechnology, faster time to market is a significant competitive advantage.

"Our process and state of the art machinery allows us to deliver very high levels of repeatability and quality parts," said Middleton. "This means that even if the customer needed a replacement panel in five years, we can be confident that panel will be a perfect match with the original enclosure."

Maintaining exact tolerances was an important part of the process, critical to allowing the highly cosmetic multi-part enclosure's pieces to attach correctly every time.

After being trimmed, each part was painted and had EMI/RFI shielding applied at Ray Products' dedicated in-house painting facilities. Some parts were also silk-screened.

Ray Products worked with the engineering staff to incorporate assembly features that included undercuts and other built-in attachment mechanisms. As a result, they were able to reduce the need for costly additional hardware, along with the enclosure's overall assembly time and cost.

"We're always proud of the work we do," said Middleton. "But there's something special about being recognized for making one of the top projects in the industry."

Entries in the competition, held during SPE's 22nd Annual Thermoforming Conference on September 9-12, 2013, were judged by SPE members during the conference. "This award was given to us by our peers, and that means a lot," said Middleton. "It's validation that even our competitors respect the quality of the work we're doing."

Ray Products (www.rayplastics.com), a custom plastics manufacturer based in Ontario, Calif., operates a 48,000 square foot, ISO 9001:2008 certified manufacturing facility that is reported to offer "the largest thermoforming capabilities on the West Coast." The company also offers fully robotic 6-axis trimming and 3D coordinate measurement accurate to within a ten-thousandth (0.010) of an inch.