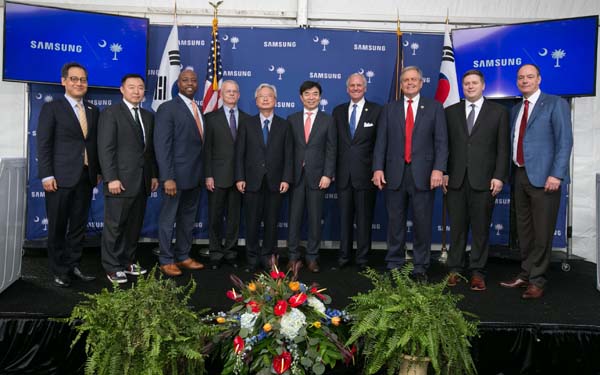 Six months after announcing its new South Carolina manufacturing plant, Samsung said that it is on track to produce 1 million washing machines in 2018 and create over 1,000 jobs by 2020.

“When we selected South Carolina for our new manufacturing facility, we chose a state and a community that believe in the power of innovation, and has the workforce to back it up,” said Kim. “It is thanks to the strong partnership we enjoy that we are here to celebrate the opening of our first U.S. based home appliance manufacturing facility.”

The start of commercial production comes just six months after Samsung announced the company would open a new state-of-the-art home appliance manufacturing plant in Newberry County, South Carolina. Since then, Samsung has transformed the site with the help of more than 800 full-time and contract workers, adding 151,000 square feet and installing two manufacturing and assembly lines with 20 presses and 30 injection molding machines. The two assembly lines combine Samsung's made-in-house components with supplied modules, then package those products for shipment to U.S. consumers. Samsung plans to produce one million washing machines at the Newberry County facility in 2018.

Samsung (www.samsung.com/us) has already hired over 540 employees to staff the facility, 90 percent of whom are locally-based in Newberry County and surrounding communities. By 2020, the $380 million plant will have created nearly 1,000 local jobs, according to the company. Samsung has hosted or participated in seven job fairs and built an entire curriculum for workforce training since its announcement in June 2017.

In December, Samsung announced a new research and development partnership with the state of South Carolina, Clemson University, and the University of South Carolina to create the Palmetto Consortium for Home Appliance Innovation [PCHAI]. This robust R&D program is intended to catalyze innovation, foster public/private collaboration, and nurture the next generation of advanced manufacturing professionals in South Carolina.

"As we begin commercial production of washing machines here today, our vision extends beyond manufacturing alone," said Tim Baxter, president and CEO of Samsung Electronics North America. "Our ambition is for South Carolina to become Samsung's U.S. hub for every stage in the home appliance lifecycle-from concept and R&D to manufacturing, quality assurance, distribution, and customer care."

In addition to its facility in Newberry County, Samsung operates a customer call center in Greenville, South Carolina, that supports 800 full-time and contracted jobs. The company's recent investments in the U.S. are reported to total more than $10 billion. Its acquisition of Connecticut-based Harman International for $8 billion represents Samsung's largest acquisition to date and positions the company to be a leader in the connected car market. The company has also committed $1.2 billion to U.S.-based Internet of Things R&D and investments over the next four years, and $1 billion to expanding the Samsung Austin Semiconductor facility. The Austin, Texas facility was established in 1996 and is reported to be one of the largest foreign direct investments in the U.S. and the largest ever in Texas.