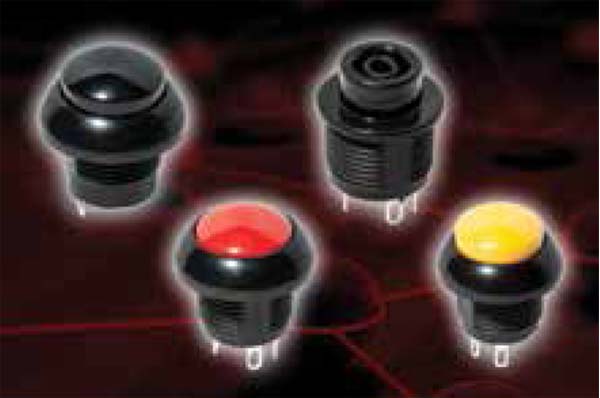 Constructed in a black PBT/PC thermoplastic housing, the switches include an internal silicone rubber seal and are rated to IP68, making them well-suited for harsh environments, power wash-down applications, or anywhere the switch may be exposed to dust, water, or other damaging elements. The PNP-series switches are tested for vibration (10 to 500 Hz) and shock (up to 50 g) and are rated for up to 1,000,000 cycles, C&K said in a press release.

“The new PNP3 series delivers a highly reliable switch for rugged applications that is also commercially attractive,” said Edward Mork, C&K global product manager, in a statement. “Alongside the already comprehensive range of standard options, we are now offering a ‘no-cap’ option, further increasing the versatility of this range.”

According to C&K, snap action provides positive tactile feedback while the lower operating force of just 3 N reduces operator fatigue. Designed for front panel mounting, the switches have a threaded body and are available with a dome bezel as a standard option. A range of actuator styles and colors are offered, and the PNP-series (including PNP8) switches may also be specified with the new no-cap option, allowing greater flexibility for designers.

The switches are capable of handling resistive currents up to 5 A with silver contacts. A gold-over-silver contact option is available for low-current applications, down to 10 mA. Circuit options include momentary action SPST NC, SPST NO, and SPDT, all with double break.