This technical information has been contributed by
P&P Industries 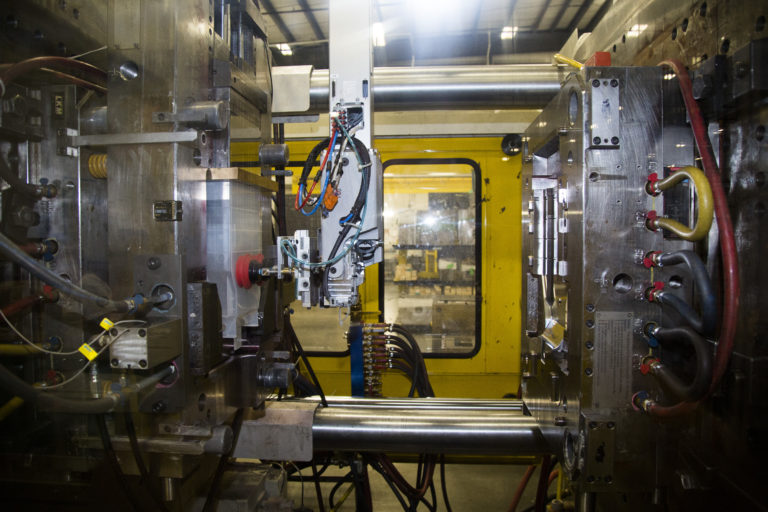 Since first cranking up its injection molding presses in 1975, P&P Industries has sought to distinguish itself from other molders by aggressively pursuing new technology and incorporating the latest engineering advancements into its operations. The Morrison, Illinois, company specializes in making precision, custom-made parts--using engineered and commodity-grade plastics--for many different industries. But although P&P has produced parts for the consumer, electrical, and dispensing systems markets, its main claim to fame is its relationship to John Deere, the giant maker of agricultural machinery and equipment. P&P manufactures numerous complex parts for Deere, and has received numerous awards from the OEM for its dedication to high quality and dependable service.

"We make a large variety of parts for the agricultural markets, and we do a lot of work for John Deere harvesting and seeding equipment," P&P Industries Sales Manager Kyle Milan said in an interview. "We also make some of the GPS housings, vacuum chamber parts, canister heads for hopper systems, and boom wear plates. We also do insert molding for Deere, where we'll put metal parts into the molds. There are also four other agricultural equipment companies that we make parts and components for--both large and small parts."

Milan says that P&P began receiving awards from John Deere in 1999 in recognition of the "hard work and innovation" that the supplier has provided for the OEM. "In 2005, we received the Supplier of the Year Award for Hay & Harvesting; in 2003, the Five Year Hall of Fame Partner in the Seeding Group," he notes. "In 2006, we received the Five Year Hall of Fame Partner Award in the Harvester Division, and received the Achieving Excellence Awards every year from 1999 to 2009."

The awards are special, Milan says, because they are from an OEM that has many suppliers and spends a great deal of money every year on manufactured parts. "We're well known in the Harvester and Seeding divisions," says Milan. "If a company like Deere is shopping new parts programs, it always wants to look at its best suppliers first. If we can give them competitive pricing, they won't shop the parts on the open market because we're a preferred supplier."

How did P&P attain this lofty status? The company's focus on engineering, quality, and value-added customer service has had a lot to do with it. An ISO 9001:2008 certified custom injection molder with more than 35 years of experience, P&P Industries combines scientific molding with Six Sigma methods to mold a variety of high-quality, precision parts. Using concurrent engineering methodology, P&P collaborates with customers' design engineers to optimize designs for manufacturability and catch problems before production begins. The company also employs various analysis tools--such as fill analysis, cooling analysis, and warpage analysis--and conducts rigorous, certified mold tryouts before heading into production.

All of these offerings are in stark contrast to the challenges that many OEMs face when getting their parts manufactured overseas, according to Milan. "You can get a cheaply made part overseas, but are you going to get the personal attention and quality that you need?" he asks. "If an OEM has high quality standards, they may be disappointed with the work coming from Mexico and China. You also have to overcome language barriers, long distances, freight challenges, customs fees, duties, and additional taxes. These are things that a product producer doesn't always think about. It's a lot easier for a customer to drive an hour to see a contract manufacturer, than to fly overseas for 14 hours."

Like many other representatives of U.S. contract manufacturing companies, Milan believes that if low quoted prices are tempting OEMs to go offshore for manufacturing, they should consider all of the costs--not just the per part price--of doing business overseas and in Mexico. "Many companies think that costs will drop drastically if they use suppliers in Mexico, but it's not really the case," he remarks. "We have competed with programs where they shopped the parts down in Mexico, and we were able to match their prices penny for penny. If you were to ask 'How much can you make this part for?' that's one thing. But when you ask, "How much will it cost to deliver this part to me?' that's a totally different way of looking at it."

"We invest a lot into the company from an engineering and technology standpoint," says Milan. "We try to keep up with the latest technology, and we'll consider new technology if a customer is interested in a particular process. We've grown into a company that can supply multiple industries, and that has a wide range of capabilities. We've put a lot of money back into the company in the form of six-figure assembly equipment, while not charging the customer."

In mid-August, P&P installed its largest injection molding machine--a 780-ton capacity, computer-controlled behemoth from Haitian International. The company purchased the press so that it could manufacture larger parts for its customers. Prior to the acquisition, the largest injection molding press in the plant was a fairly large, 550-ton workhorse. P&P now has 25 electric and hydraulic presses, offering from 10 tons to 780 tons in clamp force. The new machine has a 37-inch platen and a 92-ounce barrel that can accommodate a 5.6-pound part.

"Over the years, we've noticed that there was a customer base that we weren't able to go after because we only went up to 550 tons," says Milan. "We were frequently asked, by current and potential customers, if we had a 780-ton machine. After a couple years of saying 'no,' the corporate management decided that it was time to buy one to fill out our capacity. We'll now be able to make a part that is about 3 feet x 3 feet."

Although P&P didn't purchase the press for any specific new markets or engineered materials, the company's sales manager says that the new machine should open new markets and parts applications in many areas, including the company's extensive interactions with John Deere. "Our 550-ton machine allows us to do a part that is about 2 feet in diameter," Milan continues. "The new machine will give us endless possibilities for even larger parts."

The company is also considering purchasing, within the next year, a 1,000-ton press that will allow it to handle parts that go up to 4 feet x 4 feet. "We'll have to reinforce the floors for the 1,000-ton press, which is about 20 feet long and very heavy, and we'll have to increase the voltage on our electricity system for the larger machines," Milan explains.

Milan says that the molding company has considered becoming a tier-2 or tier-3 supplier to the automotive market, but won't promote this work too aggressively because of the instability of the industry at this time. However, other vehicle markets that may be in the company's future include armored military vehicles, aftermarket parts, or high-end automotive applications that require large tonnage processes for bigger parts.

"One market that we couldn't get into before would be the packaging equipment industry," says Milan. "You need larger tonnage machines to make plastic pallets and plastic crates that hold two-liter soda pop bottles. Health and fitness might be another new market, making large parts for treadmills, or other exercise machines."

P&P Industries (www.ppind.com) attributes much of its ability to consistently produce high-quality parts, with low scrap rates, to its use of scientific molding, a practice that bases manufacturing decisions on data gathered through real-time monitoring of molding parameters. By analyzing the data that's been gathered, the molder can develop molding parameters for variables such as cavity pressure, fill time, and clamp pressure, which can then be monitored and adjusted in real time through the use of in-mold sensors and an eDARTTM process control system from RJG, Inc. As a result, scientific molding gives customers the confidence and assurance that quality of their parts will be maintained on a repeatable, consistent basis from shot to shot.

"Scientific molding is not specific to a part or a process; it's a way of functioning in injection molding operations," says Milan. "The purpose for scientific molding is to use a scientific approach to gather actual values and build a robust molding process that will account for external variation of raw materials and equipment. You always know what's going on in the molding machine, often in real-time. For example, if you're going from one lot of material to another lot, and the melt flow index of that material is different, you're going to have a change in your process. If the material melts more slowly or more quickly, something is going to change in your process. The quicker you can detect such a change, the more scrap you can eliminate."

By eliminating scrap, P&P can pass the cost savings on to the client. Milan says the company's scrap percentage is less than one half (1/2) of one percent, at a time when the industry average scrap ratio is reportedly about 1.8 % to 2%. "Our scrap percentage is low mainly because we're able to prevent problems from happening with scientific molding practices," Milan points out. "So when we discover a problem, we diagnose it with data before we continue. A company can fully automate an injection molding process to where the process will almost run by itself. The machine will make changes on the fly, based on the information it's getting."

Milan says that scientific molding can be applied to any aspect of injection molding, beginning with the design of the part and extending through production. Different levels of application allow the molder build a modular process control system that most often includes the use of digital sensing technology in the mold tooling. "The quicker you can partner up with the customer in the developmental process and build the tooling based on scientific molding, the better off you will be at the end of production," he explains. "If you are making a very simple part, you don't necessarily need sensors in place, but for a complex, precision part, we're going to be better off with the sensors inside the tooling."

Scientific molding also allows an injection molding company to knock precious time off of the process, which ultimately makes the molder more efficient and more cost-effective. "I sometimes tell customers, if you lose one second off of a 30 second cycle, that's two seconds a minute," says Milan. "If you do the math, it's 166 hours per year you're saving. If you multiply that times what people are charging for machine time, you can consider it a $5,000 to $20,000 savings per year."

P&P is certified by RJG, Inc., as a mold builder and mold tryout facility. RJG Inc., of Traverse City, Michigan, provides training, technology, and resources for injection molding companies. "We don't build our molds in-house anymore, but we are still a certified mold builder through RJG," says Milan.

This technical information has been contributed by
P&P Industries