This technical information has been contributed by
Westminster Tool 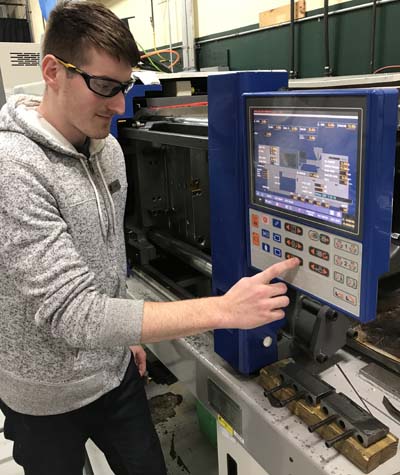 Seth Hale, a mold designer, demonstrates the controls on the Toyo110 injection molding press used to make the medical part described in this article. Photo by Mark Langlois.

A Connecticut mold manufacturer digs deep to ask the right questions, learn new technologies, and apply unique methods to solve customers' problems. Smart communications are key to it all.

To accomplish that, Westminster trains its employees to be curious: to ask why, and keep asking until they genuinely understand what the customer wants–and to then provide it.

For some manufacturers, buying a mold or a tool is a hands-off transaction. Westminster doesn't want that relationship, in part because many mold makers do that. Digging deeper to genuinely help the customer and to build a lasting relationship is something Westminster insists on. Westminster hires people who want a hands-on relationship with customers.

Hands-on is "We ask you 100 questions until we genuinely know why you want this tool, and we make you a tool that will perform exactly as you want," said Raymond Coombs, who founded Westminster in 1997 and incorporated it in 1999.

"Our greatest strength and key differentiator is our people. Our internal culture and business model enables customers, from the initial quoting process, into engineering and through production, to experience a unique and extremely valuable experience," said Hillary Coombs, vice president, Westminster Tool. "It is largely due to our internal culture of embracing curiosity."

Hillary Coombs told a reporter who visited Westminster's Plainfield, Connecticut facility in February that customers are often willing to share information about a part's application with Westminster's designers. There are numerous reasons for this, she said, including the fact that Westminster does not produce medical parts. The company makes injection molds, not plastic parts. It tests its molds by making enough parts to qualify that both the mold and the molding process are producing a part that meets the specification.

"Even though we're not competing with them," Hillary Coombs said, "we do have to spend time helping educate some of our customers on the importance of transparency in helping us to help them succeed. We find that if we ask the right question, we get the information we need. We're turnkey."

"Turnkey" means that after Westminster finishes building a tool, it runs parts on its own machines until it can tell the customer exactly how to run the tool successfully with respect to time, temperature, and pressure. "They slide this tool in, they press a button, they make a part," Raymond Coombs said.

Westminster Tool is located at 5 East Parkway, Plainfield, where it operates a 13,000-square-foot manufacturing plant. It opened a second, similar-sized plant in Sterling, one town over, where it runs the Westminster Academy for training employees and hosts the company gymnasium. It has space there to add an additional production line when needed. It employs four engineers, and 38 people overall. The average staff age is now 33 years old. Before 2013, that number was 54 years old. 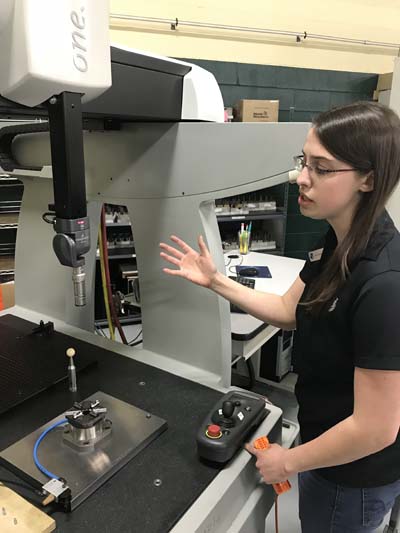 Westminster does produce injection molded, high-performance thermoplastic components for the aerospace and defense industry. Hillary Coombs said Westminster plans to grow this side of the business due to demands for lighter-weight aircraft parts.

To understand the problems a customer faces, Raymond Coombs teaches his staff to dig in and ask the right questions. "What keeps you up at night? What's your biggest challenge? Now we become part of the challenge. We face lots of challenges and that's what's making us successful."

Learning a New Technology to Make a Mold

A medical customer approached Westminster with what sounded like a challenging medical part. "Our customer needed a solution to a challenge–they needed to produce a medical grade part with a threaded feature that had to be produced in a clean room environment. Typically, threaded features in plastics parts are created utilizing a hydraulically-actuated mechanical action within the injection mold. Hydraulic oils cannot be used in a clean room environment. Therefore, our customer challenged our design team to come up with a new solution," said Hillary Coombs. The customer picked Westminster because it helped previously on another difficult part.

To overcome the hydraulic issue, Westminster staff realized the customer would need to use an alternative solution within the mold to create this threaded feature.

The Westminster team prides itself on staying informed and being aware of new and enabling technologies within the injection mold industry. They knew of a German company that had a servo (electric) unscrewing technology for injection molds that might work. Keith LeSage, 30-year veteran mold designer at Westminster, incorporated the servo mechanism into the design, and Jason Taylor, a six-year veteran tool maker and CNC operator, taught himself how to use the servo. It involved reading a 300-page manual. LeSage gave Taylor full credit for solving the problem.

"Westminster Tool's design team invests in staying up to date and understanding progressive technology advancements within the industry," Raymond Coombs said. "We were aware of a new type of unscrewing mechanism, which was servo driven. This required a small power pack that was added onto the mold, which thus could be used in the clean room environment. As neither company had experience with servo driven mechanical mold actions, our customer depended on Westminster Tool to use our design experience to manufacture a mold around a new technology and further assist them in developing the manufacturing process. This included developing safety protocols, and developing how the work cell would function."

"It's not plug and play–it's a German rotary servo," Taylor said. "It advances the core forward and back while rotating the screw threads. It's really accurate, micron precision." In some cases, Taylor would e-mail his contact in Germany and come in the next day to find an answer waiting. "It took two or three days of talking back and forth to Germany to get it right."

In addition to the German servo, the work included a Japanese injection molding machine, a Toyo 110 press. The Westminster team made these devices work together. For example, at the same second the injection mold opens to release the part, the servo must unscrew the metal threads at precisely the right turn-rate to avoid damaging the part.

One More Wrinkle to Improve Efficiency

During the process, Westminster and the customer agreed to change the material being molded to a polycarbonate that had a higher melting temperature than the original plastic. Taylor, who was speaking to his contact in Germany at the time, was warned to cool the servo controller to be safe. Taylor then added a cooling system to the design.

To cut the mold out of steel, Amy Skrzypezak, the electrode manufacturer, had to design, cut, and inspect electrodes for the EDM machines. In all, she and Jayson Taylor had to create about 184 electrodes in at least 40 shapes.

To make the tool, Westminster used other machines beyond sinker EDM and wire EDM, including hard milling, soft milling, and grinding machines. The finished mold is a single cavity, class 101 mold, capable of producing millions of parts to a tolerance of two ten-thousandths of an inch (0.0002 inch).

"There was a lot going on with this part, a lot of learning going on," Taylor said. Part of the team's communication demands involve not the customer or external suppliers, but communicating properly with "internal customers."

Seth Hale, a mold designer who joined Westminster after an internship, said a couple of reasons he picked Westminster for a job was its interest in curiosity and the range of work options open to employees. He said everybody is required to cross train in at least one other job, but the training doesn't stop there. He said they encourage him to ask questions of people in the shop.

Hale said when he saw the tool LeSage designed for the medical part, he asked Keith what he'd do differently to make it better next time.

"We're pushed here to ask those questions, to be curious," Hale said. "Constant improvement, as well as constant learning."

LeSage answered that he would change the placement of the servo to improve efficiency. Having learned how to use the servo, Westminster will be able to design future molds using the technology to assist other customers with similar challenges.

"Our designers are not afraid to make recommendations–versus just simply take a drawing and building a mold to fit," Hillary Coombs said. "Many customers choose to work with us simply to have access to our designers and their problem-solving ability."

Venturing out of plastic injection molding, Westminster assisted an aerospace company in advancing and improving the manufacturing process and technology for a carbon fiber composite part. The customer knew the process could be drastically improved to increase efficiency, and they knew Westminster Tool had a history of being curious enough to solve an array of challenges. They utilized Westminster to research alternative options for manufacturing, with a focus on heating and cooling options.

Westminster (www.westminstertool.com) took its curiosity and mold making knowledge and applied them to this problem. It created the Westminster trademarked Westminster Thermal Management System (WesTempTM). Westminster changed the manufacturing process and invented a heat management system to cut costs. What had been oil heated and cooled, raising the temperature, slowing manufacture, and creating an environmental waste product, Westminster turned into water heating at a lower temperature, which sped manufacture and eliminated any waste oil.

"We eventually made a difference for them. We saved them time, waste and space," Hillary Coombs said. "We used our injection molding knowledge and our curiosity-based business model."

"Imagine euphoria in manufacturing, where everyone understands each other and respects each other," said Raymond Coombs. "We give them the tools to communicate. We turn conflict into conversation."

This technical information has been contributed by
Westminster Tool