This technical information has been contributed by
Proto Labs 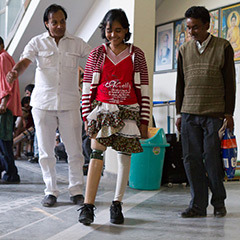 MAPLE PLAIN, Minn.—The ReMotion Knee, a low cost prosthetic knee joint designed and manufactured by D-Rev, is the latest winner of the Cool Idea! Award from Proto Labs, a quick-turn manufacturer of CNC-machined and injection molded parts. D-Rev is this year's first recipient of the Cool Idea! Award, launched by Proto Labs in 2011 to give product designers the opportunity to bring their innovations to life by presenting up to $250,000 worth of prototyping and short-run production services to award recipients. Proto Labs is providing D-Rev with injection molded parts to fulfill its next round of testing.

The ReMotion Knee project started in 2008 as a project in a graduate bio-medical engineering class. The class collaborated with the JaipurFoot Organization, India's largest provider of low cost prosthetics, and later teamed up with San Francisco-based designer Vinesh Narayan. In 2010, D-Rev, a non-profit organization dedicated to improving the health and income of people living on less than $4 per day, continued the project with Narayan, who was hired on as a product manager.

"About 10 million above-the-knee amputees live in developing countries, and the ReMotion Knee allows them to walk stably on uneven or unpaved terrain typical of the developing world. It also helps them return to work, and remain independent," said Narayan in a press release from Proto Labs. "Current low-cost knee joints are mostly single-axis joints. They operate similarly to a door hinge, and although they are inexpensive, they are unstable. ReMotion uses a polycentric mechanism, similar to anatomical knees, to provide greater stability."

Today, more than 4,600 amputees have been fitted with a ReMotion Knee. As part of the Cool Idea! Award, 100 knee joints will be injection molded and used in field testing to ensure performance as manufacturing transitions from CNC machining to injection molded parts. The shift is important for maintaining quality while serving large numbers of people.

"We were attracted to the ReMotion Knee largely because of its mission and potential to improve the lives of thousands of people," says Larry Lukis, founder and chief technology officer of Proto Labs. "The entire design is extremely well done, both aesthetically and functionally. Every aspect of the device has been well thought through, from the use of high quality plastics, instead of metals, to save on cost and maintenance without sacrificing performance; to the rounded edges and spring that create a more natural appearance and gait."

"With the Cool Idea! Award, we are able to test the new knee design with much less risk, by only producing 100 injection molded knee joints," said Narayan. "This is not typical for most injection molders who require large production runs. Working with Proto Labs has significantly accelerated the project without adding risk."

Unlike other product awards that recognize products after they're in mass production and on store shelves, Proto Labs's Cool Idea! Award is meant to help cool ideas come to life. Eligibility for the award is during the design and development stage, when innovators are too often stymied by lack of resources or funds to turn their ideas into real products.

For more information about the Cool Idea! Award and how to apply, visit www.protolabs.com/CoolIdea.

This technical information has been contributed by
Proto Labs