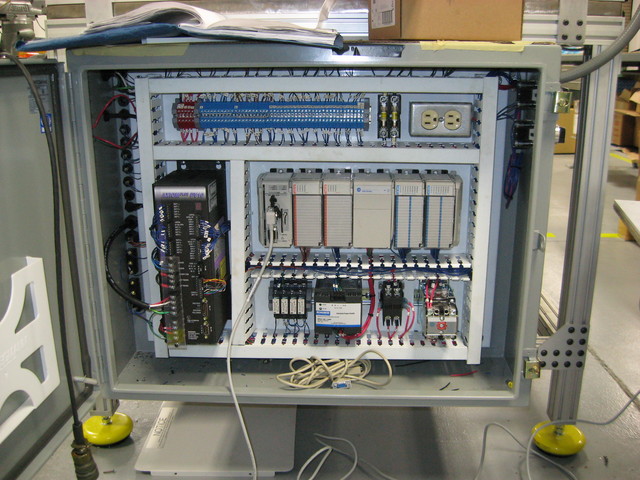 Robotic parts handling and the ability to design and build its own tooling are just a couple of ways that a vertically integrated family of companies is able to save manufacturing costs.

Stanley (Stan) Williams, Jr. says he didn't have any big vision for Wilco Die-Tool-Machine Co. when he started the company in 1951 in his father's garage in Maryland Heights, Missouri. Not knowing how well his business was going to do, he was careful not to over-extend himself financially, and maintains to this day that the company has "always funded itself" through its own revenues. Proud of his company's craftsmanship, Stan began a second company, Wilco Molding, Inc., in 1976 because he "didn't like how molders were treating the molds" he had built.

"We are a one-stop shop that offers turnkey operations covering every step of the manufacturing process, in-house--from engineering to prototyping to parts, to even supplying the customer with custom automation that we can make for their production facility," says Wilco Director of Operations and Business Development, Gary Guetterman. "We do a lot of medical parts and medical component assembly, as well as parts for the electrical, appliance, and many other industries."

Wilco recently received ISO 9001:2008 certification of all three divisions, as well as ISO Class 8 certification of its two clean rooms--one for injection molding and one for component assembly--as it gears up for anticipated strong demand from medical device manufacturers.

In a recent phone interview, Gary Guetterman spoke with Design-2-Part Magazine about the company's evolution from mold builder to turnkey supplier of tooling, parts, and automation equipment; its ability to compete with offshore manufacturing; and its plans for the future.

We build the die tools, molds, for not only ourselves, but other customers as well, at Wilco Die-Tool-Machine Company. We can machine parts, build different dies, different tools, injection molds, metal injection molds, progressive stamping tools--anything like that.

The automation company is fairly new--about two years old--so we're still growing that one. We do a lot of one-off and two-off pieces of automated equipment for customers in that company. Those can be built on our design--we can design and engineer those ourselves based on their idea--or we can take their design and then build it.

D2P: What types of automation machinery do you produce?

D2P: Which of the three companies is currently seeing the most business, and do you see that changing in the future?

GG: The most business in sales comes from our plastic injection molding company, Wilco Molding. The other two are complementary to that business. We do not see that changing in the future.

D2P: How did Wilco get into the manufacturing of automation equipment?

GG: The Williams family owns three buildings here. One of their tenants was an automation company, and Stanley Williams ended up buying him out. Stan saw that he could do more with that company than was being done with it. He saw that it would also be a good value added company to go along with the other two that we already had.

The Die-Tool-Machine company and the Automation company share similar processes and have a lot of similar equipment--things like CNCs, wire EDMs, and milling machines. We already had engineers here, and we already had people who knew how to run the machines, so it was a good fit. Also, we can really sell that with our plastic injection customers as an "after buy" to the parts, because most of our plastic parts are components for other manufacturers' processes.

D2P: What advantages do you provide customers as a one-stop shop?

GG: We can offer that full turnkey experience. They can come in and get the engineering done, they can get the design, and we can do the prototypes in house. We can do the mold building, we can make your parts off the molds we've built, and then we can even go further now and make you a piece of automated equipment that can help assemble our part into your process.

The biggest advantage obviously, is that we have control of the entire process. We're not farming it out, we're not sending the mold design out to China to get it made and brought back here, and there can always be something that gets lost in that translation. We take ownership of it, we're responsible, and it's on us. So there's no pointing fingers at anyone else.

D2P: Wilco recently received news coverage of how the company is competing with China and, in fact, bringing some work back to the U.S. Can you tell us more about Wilco's success in these areas?

GG: We've had two jobs just this year that we've been able to take back from China. One was strictly taking the part, which was being molded in China, and quoting on it. We just beat them on the part price, and we are very close to the customer. So by coming in just barely under their price and being so close, and not having to order all those parts at once-- that's how we got in the door with that one. That was a customer that we had already been doing some automation work with, and they basically asked if we wanted a shot at competing for these parts that were being made in China, and we said, "Yes," and we were able to do it.

Another customer is a China-owned company--located probably within five miles of us--that had been doing everything over in China. They make valves and gas lines for barbecue grills and propane tanks. They don't make the grills or tanks, but they do all the connections, valves, and fittings. This company was trying to find somebody that could compete with the pricing and the quality they needed. They also wanted some low inventories to hold, and to be able to control the prototyping and sampling phase a little better. So we got involved and worked with that company, and we are now making parts for them. Again, they're a China-owned company that has always been doing business with China. But because the price, quality, inventory, and our location were all working for us, we were able to get that job.

D2P: What are some of the ways that Wilco is able to help customers reduce the total costs (not just the quoted part price) of manufacturing and delivering a high-quality part?

GG: Sometimes you're not going to get all the way down to a China price; it's just not possible. So you have to take into account the other factors. You have to take into account the logistics of it, and stress that people don't have to wait two months for the boat to come over with their parts. They don't have to pay that shipping cost that's pretty much doubled in the past year. They don't have to worry about communication. We are here, we work on the same hours as they do, and carrying that inventory has a cost to it. So these factors work for us, so that we can compete not just strictly on price, but on the overall cost of it.

D2P: How are your capabilities uniquely suited to helping OEMs in ways that overseas suppliers can't match?

GG: It's that quick response--our speed to design the product, to engineer that product for them--that helps. We have in-house designers and engineers and we can, if needed, have a model to a customer the same day, next day--it depends on the customer's need. That's something you can't do with China. That speed is worth something.

D2P: Do you do contract machining?

GG: We do contract machining in lower volumes. We build molds, which entails machining. We can machine circuit components, but in low volumes. We're not a high-volume machine shop.

GG: Companies that do sheet metal stamping and make machined stampings. We can build dies for them, so that they can stamp out components. We've also built molds for metal injection molding (MIM), as well as plastic injection molding, fixtures, and little jigs. We build pretty much any kind of mold.

D2P: What are the advantages of building molds in-house?

D2P: Wilco recently certified its two clean rooms to ISO Class 8 standards. Can you tell us more about Wilco's work in these molding and assembly clean rooms?

GG: The molded parts that we do, which actually then go to the assembly room, are for biomedical research and also clinical trials. Those are basically what we have clean rooms for. We do a couple of electrical components in our clean room, but really the clean rooms were certified for our medical base.

We've had the clean rooms for a few years now, but we'd never actually had them certified by an outside company.

D2P: What are some of the types of parts that Wilco molds?

GG: We make a lot of vials and tubes--test tube type components.

D2P: Do you foresee more business with medical customers as a result of your certification?

GG: We've been in talks with a large medical customer in our area that suggested we needed to get them certified in order to do business with them, and we are currently talking about new business with them because of that certification.

D2P: One of the ways that Wilco strives to maintain control of efficiency and costs is through robotic parts handling. How does this capability translate to higher efficiency and lower costs?

GG: It directly translates to fewer direct labor costs. We use robots on most of our machines. Not every part that we run can accept having a robot coming in just because of the way the design of the part or mold is. But every machine is set up to accept a robot, so we can move one over in 15 minutes if we had to.

But for the most part, every machine has a robot on it, and when we're running 13, 14, 15 machines at a time, we may have only two or three operators out there running just because we have things automated. We don't allow parts to get flash on them; we don't allow anything to run less than 100 percent, just because that will affect labor. If you keep the molds in good working condition, and you keep the parts looking perfect, you don't need people to stand there and look at every part.

D2P: What can customers expect when they order injection molded parts from Wilco Molding?

GG: They can expect excellent quality; our reject rate is near zero. The lot traceability is there. We offer C of A's--certificates of acceptance--on everything. We can tell you when the part was made, and by what material, and where that material came from on everything. We don't vary from the specs in material: Everything is 100 percent what the customer wants. You'll get on-time delivery; you'll get a backup of inventory if that's what you require.

D2P: What are Wilco's plans for the year ahead?