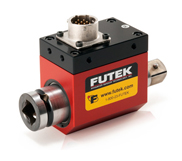 Precision and reliability are unwavering requirements of the strain gage-based sensors, ranging from miniature to massive, that the company designs and manufactures in the U.S. for markets such as aerospace, medical, and automotive testing

As Javad Mokhbery, president and CEO of Futek Advanced Sensor Technology Inc., escorts a reporter around Futek's newly remodeled, 20,000-square-foot facility in southern Orange County, Calif., it's easy for the visitor to get a sense of the company's unique identity. Whether it's streamlining its production system or creating a new, state-of-the-art sensor, Futek gravitates toward innovative, leading-edge technical solutions. The contract manufacturer, situated south of downtown Los Angeles in the town of Irvine, makes abundant use of proprietary technology in its design and manufacturing operations.

"We are the only source in our market that manufactures cryogenic sensors that meet the most challenging requirements regarding size, capacity, and specifications," says Mokhbery. "We designed and engineered these cryogenic sensors using our own technology. These sensors can operate in environments as low as -320 degrees. For example, they could use a load cell soaked in liquid nitrogen."

Another area unique to Futek is its expertise in creating sensors that have one-piece construction.

"We try to make as many of our sensors as possible with one-piece construction," Mokhbery insists. "In this way we don't have to use any fasteners or bonding materials to hold them together, which makes for a stronger component and more reliable and long-lasting. We hold the enclosures together by a welding process. Another advantage is that it eliminates several assembly procedures and the sensor ends up being lighter. I think we have innovated greatly in this area because we are willing to take the time to do the extra engineering that is required."

Another Futek specialty is making very small sensors that are very precise, some the size of a medium-sized vitamin tablet.

"Futek is among very few sensor companies worldwide that can make the miniature sensors," Mokhbery maintains. "We are well known for a low-capacity, dyne sensor that measured one thousandth of a gram, and the total weight was less than one gram. We also manufacture load cells and torque sensors in a very high capacity range when required."

Futek manufactures sensors for many different industries, including aerospace, and sells its products all over the globe. Customers include MIT, NASA Jet Propulsion Lab (JPL), and the Space Station. "We don't mind taking the extra time it takes to find solutions to a client's complex engineering challenges, says Mokhbery. "We are very team-oriented, so we get as many of our people involved in these solutions as we can to analyze their needs."

On average, about 40% of Futek's work involves custom-made sensors for an OEM. The company's president believes that its turnarounds for OEMs are very good. From the design stage up through production and final delivery, the average turnaround for 100, 2-inch x 2-inch parts would be eight to twelve weeks, but the company can deliver in four to six weeks on a rush basis.

In 1980, Javad Mokhbery started work at Rockwell International, in California, as a mechanical engineer working on the space shuttle program designing sensors. In 1988, he and his brother and business partner, Mohammad Mokhberi, the company's CFO, started Futek. They now have over 60 full-time employees and an engineering staff of seven people housed in a 20,000-square-foot building. The company is ISO 9001: 2000-certified, and its in-plant calibration laboratory meets standards for ISO 17025, accredited by A2LA.

As its applications indicate, Futek serves an extremely diverse client base. A sizable share of its marketplace is represented by medical and pharmaceutical devices, automotive testing equipment, systems integrators and manufacturing automation systems, aerospace and aviation equipment, material handling, and civil engineering uses. In the medical field, the company's applications range from drug and dialysis delivery systems to prosthetics and body parts. Other sensors used in the medical field must be sterilized, necessitating very specific use requirements. For example, if a patient has an artificial knee, it's hard for them to know what stress limits can be applied to the knee. Now, however, a sensor can be connected to the brain to give the patient a signal about how much pressure he or she is applying to the knee.

"If one of my customers is using a sensor to open and close an automotive door for a test with millions of cycles, they don't want my sensor to come apart before the door does," Mokhbery explains. "Sensors used in the space program must be made to endure the shock from the launch. So our sensors have to be very reliable. There is no room for error in most applications. The big aerospace companies often come to us to design parts for them, and consider us an extended part of their corporation. Our engineers are able to completely design a component for our clients, so we are a one-stop shop."

Innovation is also evident on the shop floor at Futek. In one instance, the company saw that storage for finished parts in its warehouse was not efficient and critical parts were getting dirty. A system, therefore, was devised to streamline parts storage and bring it closer to the main manufacturing area. First, the company built the storage area by devising chain-driven rectangular buckets that move in a loop in a large, vertical 20-foot area. There are four of these areas, and parts are documented in a computer system nearby so that parts can be found very quickly. And since they are in a confined space, the parts are kept very clean and ready for use.

Futek worked on one project with NASA to deliver a very precise sensor for a platform launch. They only had about five weeks to complete the project, and had to have it calibrated at NIST in Washington, D.C., prior to launch. "Starting from the design stage, we delivered the parts on time," Mokhbery remembers. "And we had to have very stringent quality control. As usual, we tested 100% of all the parts before delivery."

Futek utilizes a wide variety of machining tools to form metal component bases. These tools include a wire EDM machine that allows the firm to make the parts more compact, which helps with overload protection. A laser engraving machine is employed to prepare the surface before anodizing and for cutting very thin parts. Rounding out the equipment array are several CNC vertical and horizontal machining centers to machine the stainless steel and aluminum sensor bases. The company also has its own tooling department, where it makes fixturing for machining and fabrication processes. Heat treating ovens are used to make parts stronger and to bond interior parts. Tolerances, which average about 0.001-inch for many of the parts, are sometimes as tight as 0.0005-inch.

Even a small, 1-inch square sensor can have 16 to 32 tiny strain gages that need to be installed. All of this critical miniature assembly work is performed by about 20 women working with tweezers and dental probes. The parts are first magnified under a microscope that is attached to a camera. The camera then projects the work area onto a computer screen nearby that allows the assemblers to see the tiny parts more clearly. Tiny strain gages, which can be 1/16-inch square, regulate the sensor's actions. All of these gages, and several other parts, have to be placed in exacting positions before wiring the circuit with wires the diameter of a human hair.

Quality control and quality assurance measures are in place all over the plant, allowing for 100% checking of every part at every stage of production. After final checks, the components go to the calibration department to be checked for load capacity. When a sensor passes calibration tests, Futek is authorized to hand out a Certificate of Calibration, which is available to customers on the Internet outlining full testing data. And some sensors are even given underwater tests to see if they are watertight and that they will operate under water pressure.

One engineering challenge had the company working on a sensor for a satellite guidance system for the federal government's Sandia National Laboratories. The lab needed to find a vendor that could produce a sensor for a frictionless bearing. They wanted a sensor that could detect rises above zero friction, and be able to withstand 50 pounds of insertion force. In addition, the sensor would have to be able to monitor the torque going through the entire system.

"We were the only company that accepted the challenge," Mokhbery affirmed. "And these parts also had to meet military specs. We were able to do it because we have extremely creative and innovative engineers and technicians. If they could not have found a vendor to make this sensor, they would have had to send the bearing back to the manufacturer to verify that the torque was frictionless, and they would have had to do an alignment check on the insertion portion of it," Mokhbery added. "We saved them many weeks of time so they wouldn't have to travel to other locations to verify it and align it. And we saved them hundreds of thousands of dollars because they could have damaged the bearing without a reliable sensor and then the whole assembly would not be functional."

In early 2007, Futek received an award for excellence from a medical device company for consistent on-time delivery, zero defects, and customer satisfaction. The award highlighted the 4,000 sensors that they had manufactured for the OEM over a two-year period. During this time, only one unit was returned from the field, and that was from an installation glitch.

Another engineering challenge brought Futek to a metal stamping company that manufactures parts for the automotive industry. The company was having trouble holding specs for brackets used under car seats, which have to be bent, stamped, and formed. They were having trouble maintaining the proper manufacturing specs on the brackets because of tool wear and other factors.

"By the use of the proper load cells and torque sensors, we were able to help them monitor their stamping and forming production to check for things that would cause the parts to go out of spec," says Mokhbery. "We improved their yield by a large factor, better than 20%, and therefore it saved them valuable production time and also eliminated a great deal of rework. And their turnaround times were increased at least 40%."