Reorganizing A Computer Chip, and a Camouflage Made of Quantum Material

Materials–and how they’re used–can bring about surprising innovations that make new components and products possible. In the two reports that follow, writer Kayla Wiles describes two breakthroughs that fit this description. In one, she chronicles how Purdue University engineers came up with a powerful transistor with the potential to make computing faster and more efficient. In the other, she reveals the counterintuitive way that a special material can “trick” an infrared camera, and what that might mean for future technology.

Reorganizing A Computer Chip: Transistors Can Now Both Process and Store Information 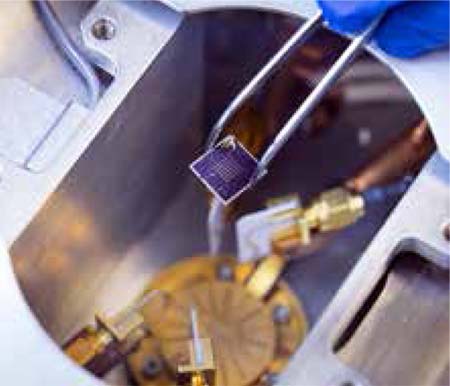 WEST LAFAYETTE, Ind. – A computer chip processes and stores information using two different devices. If engineers could combine these devices into one or put them next to each other, then there would be more space on a chip, making it faster and more powerful.

Purdue University engineers have developed a way that the millions of tiny switches used to process information–called transistors–could also store that information as one device.

The method, detailed in a paper published in Nature Electronics, accomplishes this by solving another problem: combining a transistor with higher-performing memory technology than is used in most computers, called ferroelectric RAM.

Researchers have been trying for decades to integrate the two, but issues happen at the interface between a ferroelectric material and silicon, the semiconductor material that makes up transistors. Instead, ferroelectric RAM operates as a separate unit on-chip, limiting its potential to make computing much more efficient.

A team led by Peide Ye, the Richard J. and Mary Jo Schwartz Professor of Electrical and Computer Engineering at Purdue, discovered how to overcome the mortal enemy relationship between silicon and a ferroelectric material.

“We used a semiconductor that has ferroelectric properties. This way two materials become one material, and you don’t have to worry about the interface issues,” Ye said.

The result is a so-called ferroelectric semiconductor field-effect transistor, built in the same way as transistors currently used on computer chips.

The material, alpha indium selenide, not only has ferroelectric properties, but also addresses the issue of a conventional ferroelectric material usually acting as an insulator rather than a semiconductor due to a so-called wide “band gap,” which means that electricity cannot pass through and no computing happens.

Alpha indium selenide has a much smaller band gap, making it possible for the material to be a semiconductor without losing ferroelectric properties.

Mengwei Si, a Purdue postdoctoral researcher in electrical and computer engineering, built and tested the transistor, finding that its performance was comparable to existing ferroelectric field-effect transistors, and could exceed them with more optimization. Sumeet Gupta, a Purdue assistant professor of electrical and computer engineering, and Ph.D. candidate Atanu Saha provided modeling support.

Si and Ye’s team also worked with researchers at the Georgia Institute of Technology to build alpha indium selenide into a space on a chip, called a ferroelectric tunneling junction, which engineers could use to enhance a chip’s capabilities. The team presented this work on Dec. 9, 2019, at the 2019 IEEE International Electron Devices Meeting.

In the past, researchers hadn’t been able to build a high-performance ferroelectric tunneling junction because its wide band gap made the material too thick for electrical current to pass through. Since alpha indium selenide has a much smaller band gap, the material can be just 10 nanometers thick, allowing more current to flow through it.

More current allows a device area to scale down to several nanometers, making chips more dense and energy efficient, Ye said. A thinner material–even down to an atomic layer thick–also means that the electrodes on either side of a tunneling junction can be much smaller, which would be useful for building circuits that mimic networks in the human brain.

Discovery Park is a place where Purdue researchers move beyond traditional boundaries, collaborating across disciplines and with policymakers and business leaders to create solutions for a better world. Grand challenges of global health, global conflict and security, and those that lie at the nexus of sustainable energy, world food supply, water, and the environment are the focus of researchers in Discovery Park. The translation of discovery to impact is integrated into the fabric of Discovery Park through entrepreneurship programs and partnerships.

Kayla Wiles is an engineering sciences writer/communications specialist for the Purdue News Service.

A ferroelectric semiconductor field-effect transistor (FeS-FET) was proposed and experimentally demonstrated. In this novel FeS-FET, a two-dimensional (2D) ferroelectric semiconductor, α-In2Se3, is used to replace conventional semiconductor as channel. α-In2Se3 is identified due to its proper bandgap, room temperature ferroelectricity, the ability to maintain ferroelectricity down to a few atomic layers and the feasibility for large-area growth. An atomic-layer deposition (ALD) Al2O3 passivation method was developed to protect and enhance the performance of the α-In2Se3 FeS-FETs. The fabricated FeS-FETs exhibit high performance with a large memory window, a high on/off ratio over 108, a maximum on-current of 862 μA/μm, low supply voltage with scaled gate insulator and the potential to exceed the existing Fe-FETs for non-volatile memory applications.

A novel ferroelectric semiconductor junction (FSJ) based two-terminal memristor is demonstrated as a synaptic device for the first time. In this novel FSJ device, a metal-ferroelectric semiconductor (FS)-metal crossbar structure is used, instead of a metal-ferroelectric insulator-metal structure for a conventional ferroelectric tunnel junction (FTJ), so that an ultra-thin ferroelectric insulator is not required. Meanwhile, the FSJ also offers energy efficiency advantage over the conventional filament-based resistive random access memory (RRAM) device because the conductance of the FSJ scales with the junction area. Experimentally, a ferroelectric semiconductor α-In2Se3 based crossbar FSJ (c-FSJ) as a synaptic device is demonstrated. Ferroelectric resistive switching is clearly observed in both planar FSJ (p-FSJ) by in-plane polarization switching and c-FSJ by out-of-plane polarization switching. Conductance potentiation and depression in the c-FSJ are measured and benchmarked at both original size and projected to 32 nm node with different synaptic devices. α -In2Se3 c-FSJ shows good on-line learning accuracy (⁓92 %), low latency and energy consumption due to the short write pulse width and large RON.

Camouflage Made of Quantum Material Could Hide You from Infrared Cameras

WEST LAFAYETTE, Ind. – Infrared cameras detect people and other objects by the heat they emit. Now, researchers have discovered the uncanny ability of a material to hide a target by masking its telltale heat properties.

The effect works for a range of temperatures that one day could include humans and vehicles, presenting a future asset to stealth technologies, the researchers say.

What makes the material special is its quantum nature–properties that are unexplainable by classical physics. The study, published Dec. 17, 2019 in the Proceedings of the National Academy of Sciences, is one step closer to unlocking the quantum material’s full potential.

The work was conducted by scientists and engineers at the University of Wisconsin-Madison, Harvard University, Purdue University, the Massachusetts Institute of Technology, and Brookhaven National Laboratory.

Fooling infrared cameras is not new. Over the past few years, researchers have developed other materials made of graphene and black silicon that toy with electromagnetic radiation, also hiding objects from cameras.

The discovery does not violate any laws of physics, but suggests that these laws might be more flexible than conventionally thought. A YouTube video explaining the material is available at https://youtu.be/W12Z_iiVvd8.

Quantum phenomena tend to come with surprises. Several properties of the material, samarium nickel oxide, have been a mystery since its discovery a few decades ago.

Shriram Ramanathan, a professor of materials engineering at Purdue, has investigated samarium nickel oxide for the past 10 years. Earlier this year, Ramanathan’s lab co-discovered that the material also has the counterintuitive ability to be a good insulator of electrical current in low-oxygen environments, rather than an unstable conductor, when oxygen is removed from its molecular structure.

Additionally, samarium nickel oxide is one of a few materials that can switch from an insulating phase to a conducting phase at high temperatures. University of Wisconsin-Madison researcher Mikhail Kats suspected that materials with this property might be capable of decoupling temperature and thermal radiation.

“There is a promise of engineering thermal radiation to control heat transfer and make it either easier or harder to identify and probe objects via infrared imaging,” said Kats, an associate professor of electrical and computer engineering.

Ramanathan’s lab created films of samarium nickel oxide on sapphire substrates to be compared with reference materials. Kats’s group measured spectroscopic emission and captured infrared images of each material as it was heated and cooled. Unlike other materials, samarium nickel oxide barely appeared hotter when it was heated up and maintained this effect between 105 and 135 degrees Celsius.

“Typically, when you heat or cool a material, the electrical resistance changes slowly. But for samarium nickel oxide, resistance changes in an unconventional manner from an insulating to a conducting state, which keeps its thermal light emission properties nearly the same for a certain temperature range,” Ramanathan said.

Because thermal light emission doesn’t change when temperature changes, that means the two are uncoupled over a 30-degree range.

According to Kats, this study paves the way for not only concealing information from infrared cameras, but also for making new types of optics and even improving infrared cameras themselves.

“We are looking forward to exploring this material and related nickel oxides for infrared camera components such as tunable filters, optical limiters that protect sensors, and new sensitive light detectors,” Kats said.

The work was supported by the Office of Naval Research, the National Science Foundation, the Air Force Office of Scientific Research and Sandia National Labs. The research used resources at the U.S. Department of Energy’s Brookhaven National Laboratory.