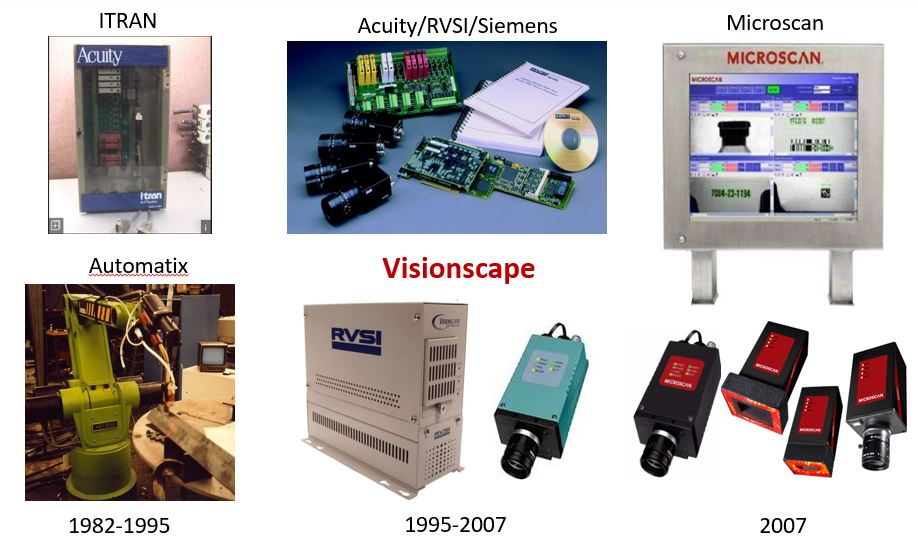 The new machine-vision SIMATIC HawkEye 1600T is no ordinary camera. Designed for use in a multitude of quality-control applications, it captures images at up to 60 frames per second. With its sophisticated on-board computer, the HawkEye can verify that products have been assembled, labeled, or packaged properly in a wide variety of production applications.

The compact camera (only 4.5 inches x 2.5 inches x 1.25 inch) can be mounted anywhere on a production line and interfaced through Ethernet TCP/IP or RS232 serial communications. A powerful RISC processor and up to eight I/O points for control and reporting allow optical character recognition for print-quality inspection in addition to assembly monitoring, part identification, and gauging.

Produced at the Siemens Energy & Automation plant in Nashua, New Hampshire, the HawkEye 1600T has been marketed internationally since its introduction in December 2007.

In the spring of 2007, Tom Driscoll, Siemens' hardware engineering manager in charge of designing and producing the HawkEye, realized that the camera's optics and circuitry were going to be ready weeks before he could get housings in which to enclose them. He recounts the dilemma he faced when deciding how to acquire the necessary housing parts.

"The product introduction schedule was the number one driver," recalls Driscoll. "We had started down a path with a die-casting company and were running into some scheduling problems. It was going to take 14 weeks to get aluminum castings for the housing. After consulting several machine shops, we learned that machining the housings from scratch would cost in the vicinity of $250 for each half--$500 for each case!  We quickly started looking for another solution."

Die casting was too slow. Machining was too expensive. After searching various alternatives, Driscoll was introduced to Graphicast, a New Hampshire casting and CNC machining facility, and its graphite molds. "They fit a lot of our requirements, especially our budget," he said. "They were quick and offered competitive pricing."

Fast, economical, yet often overlooked, Graphicast's casting process is especially suited for low- to- medium annual production runs of 300 to 20,000 parts. The company uses graphite molds to cast parts from ZA-12, a zinc-aluminum alloy that is harder, stronger, and more durable than aluminum, brass, bronze, or plastic. Offering single-source production capabilities, including in-house design, tooling, net shape casting, machining, and finishing, Graphicast prides itself on typical turnaround times of only 4 to 6 weeks from finished computer-aided design (CAD) to production parts.

Working Together To Minimize Costs and Expedite Production

Early on, Driscoll and his team had stipulated that the HawkEye required durable housing. The circuitry of the higher-performance HawkEye could generate more heat than earlier machine-vision cameras and would therefore need a case capable of conducting and dispersing heat more effectively than the earlier model's extruded-aluminum housing. Furthermore, the new camera needed to be "industrially hardened," sealed tightly to withstand higher ambient temperatures, dusty or humid conditions, and even production-line washdowns. The team came up with an ingenious two-part design--wedge-shaped halves that would join along a line that did not transect the holes for the camera's lens, connector ports, or status indicators at the front, back, and top of the housing. Realizing that the new shapes ruled out extrusion as a production method, the team concluded the parts would have to be cast or machined.

Primarily electrical engineers, Driscoll and his colleagues at Siemens needed some mechanical-engineering advice to optimize the design for the Graphicast casting process. "Being able to discuss the design with the engineers at Graphicast was very helpful," says Driscoll. "There was a lot of give and take, and we were able to really leverage their design expertise." Graphicast promised to have the first samples ready in 6 weeks, less than half the lead time for die-cast parts.

The result of the collaboration between Siemens and Graphicast is a case that seals out dust, withstands operating temperatures of 0°-50°C (32°-122°F), and is certified watertight for submersions up to 30 minutes. The top and bottom halves are sealed together with a single O-ring.

Once the design was finalized, in accordance with the Siemens-Graphicast contract, the graphite mold was guaranteed for the life of the part.

An Economical Alternative to Machining and Other Casting Methods

Tooling costs for the graphite mold/ZA-12 process are much lower than those for die casting or injection molding, according to Graphicast. The properties of graphite, a form of carbon, are said to make it ideal for moldmaking. Its overall stability (it has a coefficient of expansion lower than steel) and very low porosity yield molds that hold their shape when filled with molten metal. Large runners are used to ensure that molten metal is available to fill the mold cavity as the part solidifies, thus minimizing shrinkage and porosity. Because a graphite mold will not warp or corrode, it has a virtually infinite shelf life. Graphite costs much less than tool steel, it requires no heat treating, and its exceptional machinability dramatically shortens the moldmaking phase, the company says.

As with the hardened tool steel used for die-casting molds, a graphite mold is machined in two halves and used repeatedly. Graphicast says that it obtains the best possible casting results by using its proprietary semi-automated machines, which fill each mold from the bottom up. This minimizes the turbulence of molten metal within the mold, thereby greatly reducing air inclusions (porosity). Using a process controller to simultaneously control fill rate, cycle time, and temperature, these machines maximize the density and minimize the porosity of the castings, yielding ZA-12 parts of exceptional quality and repeatability.

Equally important to the process are the attributes of the ZA-12 alloy. Its density is approximately the same as that of cast iron, and it has excellent castability with a low casting temperature. Zinc is also readily available, ensuring the long-term viability of products designed with ZA-12 components. In addition, ZA-12 is spark-proof, so it can be used in hazardous environments, and it cannot be magnetized, making it ideal for electronic shielding.

Typically, ZA-12 castings can be produced in volume with critical-dimension tolerances of ±0.003-inch per inch for the first inch and +/- 0.001-inch per inch for additional inches. Parts require no heat treating, and typical surface finishes of 63 microinches or less are said to be better than other casting processes. ZA-12 is machined as easily as brass or bronze and more easily than cast iron or aluminum. In many cases, ZA-12 parts require little or no secondary machining.

Although ZA-12 castings have a bright, corrosion-resistant finish that requires no coating or other preparation, they can be chromated, plated, painted, powder-coated, or finished with electro-coated acrylic or epoxy to simulate anodized aluminum.

Graphicast says that the graphite/ZA-12 process is "an ideal hedge against uncertainty." Because a graphite mold can be created and modified quickly and economically, it provides manufacturers with a much higher degree of flexibility in debugging or improving products while still controlling costs--a major advantage over traditional casting methods.

For Siemens' production runs of 1,000 HawkEye housings per year, Graphicast's non-recurring tooling costs were said to be roughly one-fourth the cost of tooling for traditional die-cast aluminum parts. The cost per housing was only a tenth that of machining the parts from stock, according to Graphicast.

The final designs for the Hawkeye's housing minimized the number and size of the "gates" -- the casting industry term for the points where molten metal flows into a mold cavity. When a mold is opened and the part is removed, these hardened channels have to be removed, forming rough areas along the edges of the part. To minimize the machining that would be required, designers made sure all these areas were along edges that were scheduled for machining anyway.

After machining, which included drilling threaded holes for assembly screws and holes for LED status indicators on the top of the Hawkeye, Graphicast employees measured the critical dimensions of every part, for quality control. Taking a closer look, a Graphicast technician used a coordinate measuring machine (CMM) to inspect a sampling of the parts more thoroughly. Located in a climate-controlled room, the CMM's probe precisely measures key dimensions to make sure the part conforms to the agreed-upon design.

Once a mold is completed, many foundries cast and machine sample parts and then delay production, pending customer approval. However, Graphicast offers the options of forgoing samples and immediately running production parts (with guaranteed compliance to the CAD model and tolerances) or providing two first-article samples and pre-production parts. The former option eliminates the cost and time to set up and break down equipment to cast and machine two sample parts. The latter option allows the customer to save time and money by producing a desired number of pre-production parts (at the time of first-article samples) for fit and function, beta site testing, and trade show participation, among other uses.

Siemens took advantage of this "waived sample" program, and Driscoll's team had their first-article samples plus 50 more pre-production parts only 4 weeks after issuing the purchase order. The housing halves were machined and chromated. They were then painted, except for some masked areas where wires would enter the unit. After painting, "reference designators" -- symbols that tell the installer which connector cables go into which sockets -- were screen-printed onto each casting. This all took 10 more days, and the samples were complete -- just shy of the 6 weeks Graphicast had promised.

Siemens used the samples to assemble prototypes of the HawkEye 1600T, which they subjected to four months of rigorous testing. Camera and housing both performed very well, and the only housing modifications were not to the mold but to the painting protocols. The areas around the holes, where grommets would attach connectors and LED status indicators, required a bit more masking to keep them free of paint.

"We've been very happy with the quality of the housings," says Driscoll. "Graphicast really helped us achieve our goal of meeting our production schedule and budgets. They helped us through the whole process, listened carefully to our needs, and were very responsive every step of the way. I guess our experience validates their key selling point -- accelerated time-to-market."