This technical information has been contributed by
Engineered Precision Casting Co.
Click on Company Name for a Detailed Profile


How to Get the Most Out of Investment Castings 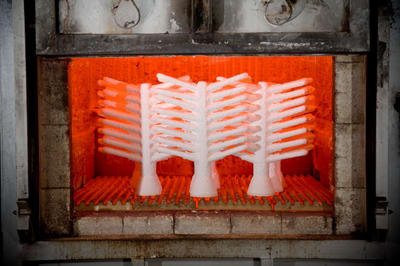 This article illustrates how exceptional performance can be obtained with know-how of the investment casting process. Eight case histories are described in this report. Six of the parts were cast complete, ready for use. The other two castings required only simple machining operation before they, too, were ready for use.

Links For An Endless Track

The dimensional tolerances on the drawings for these links showed there were two separate conditions which had to be changed if the links were to be cast without requiring additional machining.

One was that tolerances on the teeth and slots were not accumulative and the overall dimension had to be held to ±0.005". Since this dimension was over 2 inches, it was clearly beyond the capability of the process. A compromise was reached by keeping the non-accumulative condition but changing the tolerance to ±0.010" on the pitch dimension. This gave the foundry a reasonable working range, yet assured the designer and manufacturing engineer that parts, cast from SAE 4330 and heat treated to RC 36 - 40 would be interchangeable as received.

The second condition pertained to tolerances on size and location of the bosses. The foundry's first suggestion was to omit them on the castings and have the customer weld them in. But the manufacturing engineer advised that this had been tried previously and failed. The bosses had to be an integral part of the casting. A second compromise was reached. Tolerances on the dimension at the boss diameter, and the distance between centerline of the bosses, were made to agree with the foundry's requested tolerances and to maintain concentricity, parallelism and squareness of the bosses within their tolerances.

As a result of this cooperative effort, connectors were cast ready-to-use except for drilling cross holes for the linkage pin.

The drawing tolerances for this new stainless steel connector appeared to be unattainable on a production basis. Many dimensions were on the order of ±0.003". Some areas had walls as thin as 0.018". Fortunately, the buyer and designer recognized they were extending the state of the art, and that close cooperation with a carefully selected foundry would be necessary. As a result a conference was arranged which established:

These guidelines, established with the wholehearted cooperation of the buyer and engineering department, made this "impossible" casting a reality.

Letter-perfect results were achieved on this investment cast silicon brass imprinter for postal equipment. Operation of the part required that the lettering be perfect in detail, square to the drum radius, and accurately located from the center of rotation to insure a clear imprint. At first glance, the tolerances shown on the drawings appeared to be too close to be maintained on a casting. The designer and manufacturing engineer met with us for consultation. It was decided that the tolerances shown were necessary for producing the part as a fabricated assembly but were not required for a one-piece casting. It developed that the radius to the top of the printing surface was the most critical dimension and had to be close tolerance. This tolerance, which originally was plus 0.001", minus zero, was set at ±0.003" and was guaranteed by the foundry's 100% inspection with a checking fixture.

The result of this cooperation was a money-saving successful investment casting.

The secret of success in this part was the realization by the design engineer that we wanted a cast part that worked, regardless of tolerance. This rack and jaw for a hand tool had to fit with and match the operation of other component parts. Tolerances were deliberately left off the drawing dimensions. By making one foundry responsible for producing all mating parts, it was possible for the foundry to adjust its tooling to eliminate improper fit on all the parts. This alloy steel part, hardened to RC 45-50, is an example of fine work that can be done when a foundry has a cooperative designer working with it.

Two critical conditions had to be met in order to cast "ready for use" this cobalt base, wear resistant alloy shoe for a steel mill cutting machine. First, gage dimensions had to be held within tolerance, and second, surface "S" had to be cast flat. Without clearly defining methods for inspection, the operation might have resulted in continuous argument between the producer's inspection and incoming inspection as to what constituted an acceptable part. Misinterpretation was avoided, and surface "S" and gage dimensions were cast to size by having the user provide a functional checking fixture which served as a "go" and "no-go" gage.

This jet engine bracket was designed to be an investment casting. Dimensional tolerances were well within industry standards. Usual practice on hole location would have required drilling of the four holes. By allowing hole locations to vary from their true positions by .010 R. instead of .005 R. or less, it was possible to cast the 347 stainless part complete-per-print ready for assembly. The same result could also be obtained by increasing the hole size to compensate for any variation in location of the hole center.

Perseverance paid off in converting this aerospace clamp from a part that was machined from bar stock into a part ready to use as an investment casting. Tolerances were well within industry standards, providing no restriction to conversion. But the diamond knurl over the entire end radius had to be cast sharp and normal to the contour. The bar stock approach for making the knurl was to grind it in after hardening to RC 36 minimum. We were unable to guarantee the same degree of sharpness in the knurl, but we provided a sample of another 410 stainless part to indicate degree of sharpness obtainable. The value analyst was then able to present his case visually to the design engineer, who agreed to use the casting if they passed the necessary performance test. Success of the casting is attested by the thousands of clamps which have since been purchased and placed into operation without a single rejection or failure.

This instrument mount is another instance where cooperation between the design engineer and our personnel resulted in a less costly yet functionally better casting than its fabricated predecessor. The original design called for the part to be made by brazing together the machined flange and four bosses. In order to hold elliptical holes in the bosses within finished part tolerance, the bosses, as well as the holes bored into the flange to accommodate them, had to be held to very close tolerances; tolerances beyond the capability of casting. A meeting with our customer solved all problems. It was decided that since the bosses were to be cast in place, the necessity for close tolerances between the bosses and hole size were eliminated. Further review of the part's function enabled the design engineer to assign a total tolerance for location of the slotted holes acceptable to the casting producer. The casting, produced from 303 stainless, required finishing only at the flange I.D. plus grinding the bottom of the flange and top of the bosses.

The success of the parts we have described is due to one common trait. Close cooperation between the designer, buyer and producer. These examples show that the designer or buyer must know the part and its application thoroughly, otherwise no agreement can be reached if design changes or compromise of any kind are necessary.

The buyer must be ready to spend enough money on tooling to guarantee results. If the tooling fails to produce the part within tolerances, you pay for its failure with more machining time and higher scrap rates. The prospective producer must show competence on similar parts or at least on parts having some key features. If the producer cannot demonstrate such competence, both parties should clearly set forth where responsibility starts and ends.

If the part doesn't work out with one producer, scrap the existing tools and start over. The same tool usually produces the same problems and the same failures.

Don't try to cast details which can be provided better by other means. If two or more parts must be cast to fit without machining operations, be sure that one producer casts all parts. If they do not fit, there wouldn't be any arguments over responsibility.

This technical information has been contributed by
Engineered Precision Casting Co.
Click on Company Name for a Detailed Profile