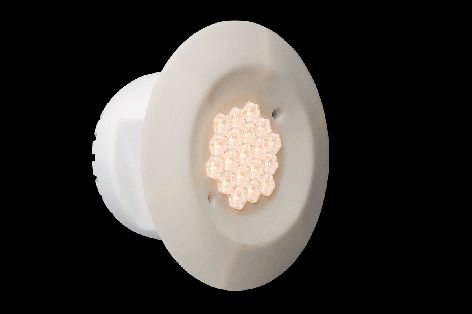 NISKAYUNA, N.Y.--Scientists from GE Global Research, GE Lighting, and the University of Maryland have demonstrated a 1,500-lumen LED bulb that they say addresses key barriers to more widespread adoption of LED bulbs for general lighting. The scientists, whose collaboration is part of a two-year solid-state lighting program with the U.S. Department of Energy, believe that the prototype provides a snapshot of the future. The announcement was made during a "future of lighting" symposium hosted by GE at its Global Research headquarters in Niskayuna, New York.

"The scientists and technology leaders involved in this collaboration are dissolving some major barriers to the commercialization of general lighting LED bulbs," said John Strainic, global product general manager for GE Lighting, in a statement. "We're taking swings at issues such as higher light output options, thermal management, and bulb size and weight. This kicks open the door to the solid-state age that is upon us."

As part of the DoE project, GE and the research team of Professors Bongtae Han and Avram Bar-Cohen at the University of Maryland's A. James Clark School of Engineering have developed and demonstrated what are said to be novel cooling technologies that effectively manage heat and promote lower system costs by reducing the number of LED chips required versus conventional cooling technologies.

"This is a revolutionary cooling technology with great promise," said Mehmet Arik, a mechanical engineer at GE Global Research and principal investigator on the LED project. "It has the potential to help us take LED lighting performance and efficiency to new heights. Through further research and improvements, we may be able to increase performance without compromising the efficiency or lifetime of an LED bulb."

GE's cooling solution is based on technology that the company uses in its Aviation and Energy businesses. Fluidics experts at GE Global Research are currently working to develop innovative ways of controlling airflow and combustion. Their goal is to dramatically reduce the amount of pressure losses and loading characteristics in aircraft engines, as well as in power generation in gas and wind turbines.

"Just one floor down in the same research building, I have colleagues using our dual cool jets technology to improve both the power and efficiency of GE's jet engines and power generation turbines," Arik adds. "With wind turbines, for example, we're manipulating airflow to increase wind energy production. With LEDs, we're using dual cool jets to improve the heat transfer rate and reduce the number of chips in the lamp."

GE dual cool jets are very small, micro-fluidic bellows type devices that provide high-velocity jets of air, which impinge on the LED heat sink. According to the company, the jets of air increase the heat transfer rate to more than ten times that of natural convection. The improved cooling enables LED operation at high drive currents without losses in efficiency or lifetime. For a given lumen output, the dual cool jets' improved thermal management reduces the necessary LED chip count. This, in turn, can dramatically lower the cost of the lamp. In addition to performance and cost advantages, the cooling technology enables reductions in LED lamp size and weight, the company says.

At deadline, GE and the University of Maryland were in the final stages of the DoE project. The organizations are now studying ways to improve the reliability and lifetime of LED lighting systems.