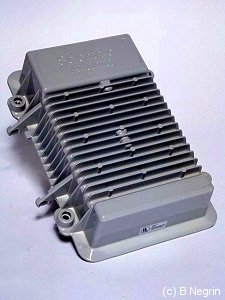 They aren't seen until the end of the journey through the supply chain, but custom metal finishing processes are essential to telecommunications parts for a very important reason: they prepare them for what is hoped will be a long life of service to a rapidly changing world. As emerging telecom technologies bring consumers smaller devices that combine faster speed (voice, video, and data transmission) with greater functionality, metal finishing shops are on the front lines of making it all happen. In many cases, their work is visible on products that have fast become cultural icons.

"When we talk about the importance of metal finishing, you really need to understand how much metal finishing affects your daily life," says Brent Hoops, sales manager at Coastline Metal Finishing (www.coastlinemetalfinishing.com), a 22-year-old company in Garden Grove, California. "It's everywhere: Look at cars, your house, all of the electronics you handle--all have a tremendous amount of metal finishing in them. I recently was looking at the new iPod nano's because of their bright new colors. Metal finishing is what gives them those tremendous colors."

Metal finishing processes such as plating, chemical film, anodizing, and painting, used on an application-specific basis, are applied to components to give them properties that are critical to performance, aesthetics, and longevity. They're used in applications ranging from switch gears to connectivity devices; bus bar and electronic contacts; and electronic exterior housings; as well as electronic racks, enclosures, and brackets, to name a few. Martin Levy, sales manager for Paramount Metal Finishing (www.pmf1.com), Linden, N.J., says that in some ways, metal finishing requirements for telecommunications components are similar to those for other components that require coatings. But in other ways, the differences are clear.

"The telecommunications components business isn't much different, in general, from other components that need to have a coating applied to them," Levy said in an interview with Design-2-Part. "Generically speaking, including in the telecom industry, it's important to apply a coating to achieve corrosion resistance. We coat a lot of enclosures and housings for the telecom industry, but where they differ, generally, is that they're looking to include solderability as one of the functions of the finish, and perhaps RFI (radio frequency interference) and EMI (electromagnetic interference) shielding, more so than aesthetic appeal and corrosion protection. Some of our coatings are multi-functional, but in the telecom industry, they're usually looking for these protections."

Many telecom parts also warrant precision masking in cases where a customer wants the part to be coated only in specific areas, rather than in its entirety. "When OEM customers are soldering, they might want the coating in only one place for better solderability," Levy explains. "It's a challenge because sometimes the areas to be masked are very small, or have odd shapes. So you have to configure your masking devices to the shapes that the engineers are looking for. Sometimes the masking is automated, but it is often done by hand, which creates repeatability challenges. The masking could be a coating, or it could be a specific jig that we manufacture. It depends on the quantity that we have to process, and it can get very complicated."

Telecommunications parts, many of which are used in outdoor environments, add critical performance requirements to the manufacturer's checklist. Parts used by the military--such as ship parts in the Navy--must be able to pass stringent requirements for being in a salty sea environment. The military will usually specify how thick the coating should be, and the company will have to pass a test for the required number of hours of salt spray, which is handled in-house.

"We're fully equipped to do this type of testing," Levy says. "Testing may be necessary for regular telecom parts, but it's all customer-driven. They may have salt spray requirements, or a specific ASTM (American Society for Testing and Materials) spec. For example, we do some zinc plating that has an ASTM B633 spec for parts that have been switched over from cadmium plating--which is very toxic--to zinc."

A number of factors must be considered when deciding which finishing process to use for a particular telecom part or component. Because a part may need a variety of finishing processes before completion, the primary factor to be considered is the metal that's being used. "An aluminum part will have to be processed differently from a steel part, for example, and different grades of the same metal will react differently," Levy explains. "The chemistry is definitive of the metal type too, so this has to be taken into account for any given coating.

"Often in telecom, the parts have multiple finishes, plating, and then painting," he continues. "Plating is often required because of the conductivity; and painting, for aesthetics. The coating is also important for grounding purposes, and just being able to construct to the next level. More often than not, painting or plating is done right before filling in the enclosure with electronics."

Coastline's Brent Hoops says that in most cases, customers have already decided which finishing process to use for a particular part by the time they've sent it in for plating. Questions that need to be asked before making this decision, he says, include "What manufacturing process will the parts be exposed to next?"; "What electronic service will the part perform?"; and "At what frequencies and temperatures will the parts operate?"

Parts for telecom products are using different combinations of materials these days and, of course, they're getting smaller. Many parts that were once made of copper, for example, have now moved to copper-tungsten, copper-molybdenum, or other newer alloys with thermal expansion characteristics that would be more appropriate for their intended use.

When part size is reduced, Hoops says, handling becomes much tougher. "We had magnets made of samarium cobalt for plating that were 0.060 inch across rather than the 0.100 inch they were before," Hoops revealed. "This made them much more delicate and harder to produce without damage." Coastline has also handled plating for the composite materials industry. "Just a few years ago, I wouldn't have believed that this would take place because of cost concerns, but it has happened."

Coastline Metal Finishing offers precision finishing processes that impart properties ranging from RFI and EMI shielding to corrosion protection, electrical conductivity, dielectric properties, and solderability. In business since 1987, the company provides anodizing, chemical film, and plating services to customers in the aerospace, automotive, and medical industries, as well as the electronics and telecommunications industries. For the telecommunications market in particular, the company processes a wide list of parts, components, and assemblies, including waveguides for satellites; microwave filter housings; couplers; carriers of different alloys; diplexers; multiplexers; microwave antennas; and GPS antennas and collectors. Coastline is certified to the ISO 9001:2000 and EN/JISQ/AS9100:2004 Management System Standards and is NADCAP accredited for chemical processing.

Demand is High for Plated Parts

Of all the metal finishing processes offered by Coastline, plating is "by far" the one in greatest demand within the telecom industry, according to Hoops. Plating finishes offered by the company include electro-less nickel, bright and sulfamate nickel, copper, gold, silver, tin plate, and passivation. "Silver plating is in the greatest demand, followed by gold, nickel, and tin; then, as secondary finishes, anodizing and chemical film," he discloses. "Electro-less nickel is used quite often as the underplate prior to gold or silver plating, so a lot of orders will travel through that finish before the gold or silver is applied."

The company plates microwave filter housings that require very low resistance values in the area where the signal travels. Without a low-resistance form of silver plating, making the parts from aluminum would be impossible. Manufacturing from another metal would add too much weight. "Many telecommunications housings are made of aluminum, since it's relatively inexpensive and easy to fabricate," says Hoops. "Without the plating we provide on those housings, soldering would be impossible and the service life--if you could manufacture them--would be seriously shortened."

Hoops says that for some products requiring solderability or wire bonding, parts are gold-plated over many different substrates, depending on the coefficient of thermal expansion needed by the customer. Each one of the substrates wouldn't have the extreme solderability or bondability of gold, according to Hoops. "Some products have multiple finishes on one part, where an anodic finish might be used for dielectric, silver plating might be used for conductivity, and electro-less nickel would be used for corrosion resistance," he says.

Levy says there's been a trend toward using plastics for telecom housings (see Custom Molding Firm Converts Metal Telecommunications Box to Plastic), which Paramount often paints. But when using plastics, OEMs may want the plastic resins to be a specific color, which pulls them away from certain finishes. "They're tending towards the plastics now because of cost," Levy explains. "The other driving factor is total weight, so that products are lighter and less expensive to ship. They're also using the engineered plastics more these days, which are very hard and strong. All of this work is customer-driven, since we're in a deep global market. The Europeans may want something different from the American market, and the Central American countries may want something different yet."

"We finish various die-cast smaller components, as well as large housings that could be upwards of 4 feet by 8 feet," says Levy. "We finish a lot of outdoor telecom enclosures that hold switching electronics, and we work on a lot of aluminum and zinc die-cast electronic housings." Reasons for using zinc and aluminum include conductivity, Levy says, and the need to mass produce a rugged part with cost savings. Zinc plating is also used for corrosion resistance, but that's not necessarily the case with zinc enclosures, Levy says. Zinc and aluminum, it turns out, are also used for their light weight.

A telecommunications OEM might choose one metal finishing company over another for a number of different reasons. In the case of Coastline Metal Finishing, Hoops believes that the company's skilled workforce is the difference maker. "Coastline's biggest strength is its experienced workforce," he maintains. "Our workforce just doesn't turn over. We have people with us that have the capabilities and experience to know when something does or doesn't work. Most of our customers return because we do a good job getting work back to them. But even more important to us, if something doesn't look right, or there's a question about what the customer wants, that customer is contacted and the questions are cleared up before the parts are processed."

Paramount Metal Finishing prides itself on its problem solving abilities and stable workforce. Levy says that the company has many long-time employees. "Our brain power is diverse in manufacturing capabilities, and we have a team of different types of engineers," says Levy. "Our greatest strength is customer support during the R & D level and into the production stage. I think that our customers chose us because we offer them consistent, deliverable parts, on-time and without defects. We're ISO certified, so we do a lot of quality control on the parts. The key to our success is also pre-engineering, since we do a lot of problem solving before we even start on a project. The more information we're given before the job starts, the better we can process the parts, so we don't end up with a problem in the middle of the job."