This technical information has been contributed by
Dynamic Fabrication, Inc. 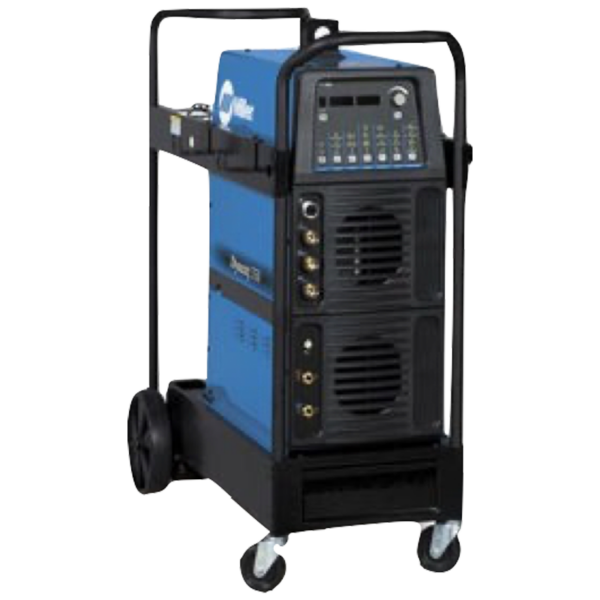 When a contract manufacturer combines old world values and craftsmanship with a New World approach to high-technology and speed to market, it is bound to be a win-win situation for both the manufacturer and the OEM. One fabrication company with a foothold in both worlds is Dynamic Fabrication Inc., of Santa Ana, Calif., a manufacturer of high-tech, close-tolerance, custom parts and components for a variety of marketplaces.

An OEM might wonder how Dynamic Fabrication (www.dynamicfab.com) can perform precision work for such a widely diverse assemblage of industries. "The reason I'm able to do precision work for such a diverse marketplace is because of the people that work with me, because they're so talented and flexible," says Mike Kartsonis, the founder and president of Dynamic Fabrication. "I have a highly-skilled workforce, guys that have been here 15 to 20 years. Another strength is having a wide variety of equipment. We have both conventional and CNC mills and lathes for machining; we have brakes, shears, rolls, punches, and tube benders for fabrication; we have an extensive welding department; and we also do complete assembly."

The multi-faceted manufacturing company was founded by Kartsonis in 1981, with the idea of turning out completely assembled components, as well as individual parts--an idea that was, at the time, new to most OEMs. Besides a client base of many Fortune 500 companies, the company has made itself available for inventive entrepreneurs as well. Dynamic Fabrication continues to specialize in close-tolerance fabrication projects, often with stringent military and aerospace specs. The company prides itself on providing not only short-run, precision production work, but also prototypes for a broad range of industries, including aircraft, military, trade shows, environmental, semiconductor, entertainment, transportation, architecture, and medical.

Dynamic Fabrication has the ability to produce many sizes of parts and components, from small machined parts to 30-foot-long, 15,000-pound weldments in many different metals and plastics on a fast-turnaround basis. The company specializes in working with stainless steel, aluminum, Hastelloy®, Inconel®, carbon steel, nickel alloys, titanium, copper, and brass. It is certified to weld aluminum, stainless steel, 4130, carbon steel, and nickel alloys, and its quality control is in accordance with AS9003.

"We can handle a wide range of markets and applications, whether it's rocket, satellite, or missile components, heart valve parts, or props for special effects in the entertainment industry," Kartsonis insists. "We're making some covers right now for an environmental company that makes a fuel recovery system. And we make burner boxes and heat exchangers for another company that builds sulfur recovery systems. Sometimes the tolerances are just as stringent for the special effects props as they are for the aircraft parts, so we are able to do a lot of close- tolerance work."

The company's president is all too aware of how his customers' requirements and needs have changed during the past decade, especially in regard to the global marketplace. "The expression 'faster, cheaper, safer, better' is true today more than ever," says Kartsonis. "It's just a sign of the times. The overseas companies can't deliver in a couple of days or a couple of weeks like we can, and we don't do the high-volume work that's done overseas. Most of the aircraft companies we do business with won't buy anything over there. When we do work for the Disney Corp., it's all "Buy American," and most of the aerospace work with the big corporations is "Buy American."

The aerospace and defense work is about half of Dynamic Fabrication's marketplace. Quality control and testing requirements are very stringent for both of these high-tech industries. "All of our inspection equipment has to be calibrated every year, which costs thousands of dollars," says Kartsonis. "And my welders have to get their eyesight checked regularly, and all of the gasses and welding wire and other consumables have to have certifications and traceability. A tremendous amount of people don't understand the high costs associated with manufacturing for aerospace and military work. It's very costly to put an airplane in the air. Just for us to make a little hinge for a latch on a door of the cockpit takes a lot of traceability."

The 28-year-old fabrication company is handling several rocket parts for two major aerospace companies. The parts are for a rocket that can accelerate to Mach4. "When we weld the rocket casings, we have to do fluorescent mag particle inspections on the welds," Kartsonis explains. "They're all very close-tolerance inspections. We also make some miscellaneous brackets, tooling, fixtures, and ground support equipment for other aerospace companies. In the defense industry, we've made tooling for Kevlar® body armor, and we've done work for armored car companies, bending and welding the armor plates.  A lot of it is tooling, fixtures, and jigs for various components. We've also worked on targets for drone airplanes, and on parts for the tow reel system that the F-18s use when they're dialing in their radar."

Aerospace and defense engineers will often visit Dynamic Fabrication's plant to inspect parts and components. The company's president says that this interaction is predictable, especially when the company is working on a part or component for the first time, or if they are critical parts.  "For the welding, we have to follow special procedures," says Kartsonis, "like the amps and voltage of the machine. They also check the welders' eye charts and certifications and they check that the welding machines are certified and calibrated."

Much of the company's testing, including x-ray tests for bending or welding, is sent to outside labs. The labs will perform fluorescent penetrant or magnetic particle inspections, or x-ray tests. "Most of these tests are for flight hardware, which is very critical, for both the aerospace and defense industries," according to Kartsonis. "We fabricate some helicopter parts that are very critical."

Problem solving is taken seriously at Dynamic Fabrication. One instance had the company brainstorming how to process a high-nickel alloy bracket that was cracking. Before Dynamic Fabrication took over the project, another contract manufacturer was making the part for the large aerospace company. "So we got the job and decided to make some special tooling so we could machine them and bend them," says Kartsonis. "This alloy has a tendency to crack during the bending operation. We were able to deal with this by making special spring tooling for the press brake, and we performed the bending at a slower rate. So between the new tooling and the slower bending, it was easier on the metal. Initially, we heat treated it and annealed it."

A critical application in the defense industry created additional challenges for the fabrication company. As in the other situation, the customer was dealing with cracking problems--this time, with armor plates that are installed on military Humvees. "After we took over the job, we had to make some special tooling to bend the plates on the press brake," said Kartsonis. "It's a real dense, high-strength steel material, so it was hard to bend. We were able to bend it without any problems, and the cracking stopped. The final result was a 20% savings in time, materials, and cost for the OEM."

One particular challenge involved several parts for a conveyor belt system with a salt bath. First,  Dynamic Fabrication found out that the conveyor system's  alignment was unsteady. After diagnosing the problem, the company decided that it had to make some new parts out of a higher- strength material. "They were using a low-grade steel for the parts, so we decided to use a 316 stainless steel," Kartsonis recalled. "We also redesigned the belt alignment to make it better, and then redesigned the parts and machined them. We were able to help them increase their production and we increased the life of the parts. When their machinery was down, it was costing them thousands of dollars per hour, so we saved them thousands of dollars on downtime."

Dynamic Fabrication is able to offer its customers design and engineering assistance by virtue of the fact that the company has two machinists who are also mechanical engineers. "My success is that I've surrounded myself with a lot of experts, says Kartsonis. "These two guys were the ones that designed the conveyor belt parts. I would say that 85% of our work is built to someone else's prints, but we also use our engineers to design and build the other 15% in-house."

Like most contract manufacturers succeeding in the brave new world, Dynamic Fabrication prides itself on offering quick turnarounds, a high level of quality, and cost-effectiveness. Continuous quality control, testing, and special processing systems enable the company to compete efficiently. "Since we don't get into high production, we don't have a lot of automation, except for our CNC machining equipment," says Kartsonis. "We do, however, have an AS-9003 quality control system in place. Our testing depends on what the blueprints call for. It could be a proof flow test, a hydrostatic test, welding x-rays, or fluorescent mag particle testing. The special system we have in place is basically to check and double-check each other's work. The tests we do in-house are hydrostatic tests, die penetrant testing for welds, and first article inspections on all parts and components."

One advantage of enlisting Dynamic Fabrication's skill set is that the company is able to make complete, finished components that an OEM can introduce right into its assembly process. The company's work is very diversified, so being flexible is a huge advantage. On any given day, the company might be machining a small bracket, building a complete hydraulic test stand, or welding a large materials hopper. Many projects are complete, finished assemblies with a multitude of complex parts. This is why Dynamic Fabrication considers itself a one-stop-shop. "We can do machining, welding, sheet metal fabrication work (including bending, rolling, and punching), anodizing, heat treating, plating, and painting," Kartsonis maintains. "The best sales tool we have is the fact that we do it right and we ship it on time."

People power is seemingly the hard-working company's greatest asset. "People ask me how many people work for me," says Kartsonis, "and I tell them nobody works for me; they work with me. I don't tell people to do anything; I ask them to do it. People that work here feel like they're part of a team. The work has a lot of variety, so there's always something different for them to work on."

The company's president has even passed out surveys to see what his employees like and don't like about the company. "They all say they like the people they work with, they like the type of work they do, and they like the overall environment," affirms Kartsonis. "I really believe the old adage that happy workers are productive workers. We even have a barbecue together every Friday, like a potluck, which everyone enjoys. So my staff has a dedication to the company, to each other, and to our customers. It's kind of like an employee ownership culture. I want to provide a challenging work environment that allows them to grow and develop their skills, and keep learning."

Kartsonis says he feels like his employees are his brothers and sisters; it's like a family working together. "Most of our business is repeat business, and a lot of it has to do with my highly-skilled, dedicated employees," Kartsonis affirms. "I think the key is being concerned about customer service, and thinking more about a customer's needs. And, it's important to keep growing and developing the company, and be constantly learning new things."

Hastelloy® is a registered trademark of Haynes International.

Kevlar® is a registered trademark of DuPont.

This technical information has been contributed by
Dynamic Fabrication, Inc.