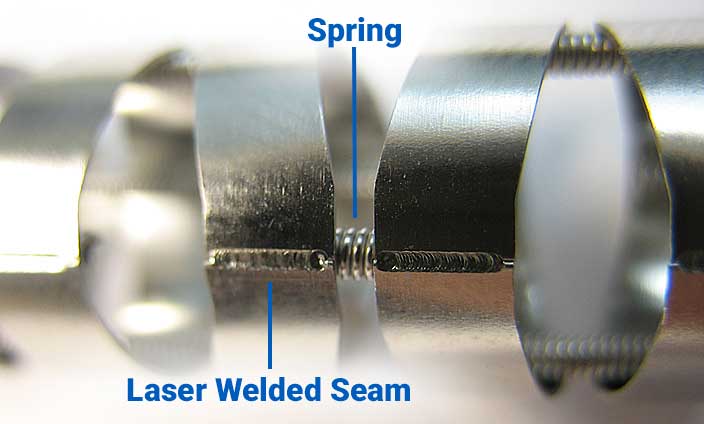 The Precision Metalforming Association (PMA) announced the winners of its Awards of Excellence in Metalforming, honoring seven companies for their achievements in design, safety, training and education, process control, quality, productivity, and product development. All winning companies were recognized at a ceremony in April during PMA's Regional METALFORM trade show in Birmingham, Alabama, where they were applauded for dedicating themselves to continuous improvement of their products and services.

Its work in developing a sub-assembly for an endoscopy device used in minimally invasive surgeries earned OKAY Industries, Inc., the Ulbrich Award for Competitive Excellence in Product Development. The New Britain, Connecticut-based company produces metal stampings and subassemblies for the medical/surgical, automotive, defense/aerospace, and other specialty industrial markets.

OKAY Industries worked with its customer, a major medical device manufacturer, to jointly develop the low-cost endoscopy assembly--an articulating tube that could be controlled by guide wires during surgery. The tube, known as an articulation joint, is a patent-pending stamped stainless-steel link assembly with 28 springs. OKAY partnered with its customer to develop the sophisticated component, typically manufactured as a laser-cut and welded tube assembly, as a significantly lower-cost stamping while maintaining critical features. The process is controlled, monitored, and maintained to consistently produce high-quality parts.

Challenges of manufacturing the articulation joint are reported to include a complex assembly process, tolerances on key dimensions, and target cost. The initial manufacturing method called for laser cutting stainless-steel tubing and then welding springs to the individual links--cost-effective for prototypes and low-volume applications. But a metal-stamped and welded assembly was said to be more cost-effective for higher-volume production in excess of one million units per year.

OKAY employed its Production Proven Prototyping process to utilize the same tooling concepts, sequence of operations, and grain direction that would be used in the production tool. Component strength, cracking, surface finish, burrs/edge condition, and feature-tolerance capability were among the concerns that OKAY assessed.

The primary reason for prototyping is to verify that the component or assembly will function as intended in its final application. However, for metal stampings, especially in this case, it was critical to go beyond prototyping for fit, form, and function and think ahead to manufacturing. Prototyping of metal stampings in this way allowed OKAY to determine if the stamping process was stable and capable, and if cost expectations could be achieved. It also allowed the company to identify opportunities for improvements in cost and quality of the component or assembly.

Following the joint development effort and prototyping by OKAY, the patent-pending manufacturing process was adopted. Here, individual links are stamped and interconnected as a complete set to maintain their locations during weld assembly. After all of the inter-connected flat links have been joined via laser-welded springs, the links are separated and the assembled articulation joint is formed into its finished diameter. To reconnect the open ends of each link, a laser operation is employed to seam weld the last row of internal springs across each link from end to end.

The use of metal stampings, rather than laser-cut tubing, to produce links has reportedly provided significant cost savings for the customer. Also, the ability to weld the majority of the springs in place while the links are in the flat state simplified tooling and the design of welding fixtures and reduced the project's capital cost. The automated laser-welding operation and integration of the automated roll forming operation ensures the customer that every part will meet print specifications without requiring secondary operations.

This R&D effort by OKAY has reportedly uncovered additional opportunities for the technology to benefit customers in several industries that seek to reduce costs by developing articulation joints via the stamping process.

OKAY Industries also received the Parkview Metal Products Excellence in Quality Award for its development and implementation of a company-wide quality system that effectively uses continuous improvement. The company's senior staff has established a company-wide culture of quality, in which the priorities of safety, quality, and productivity--in that order--are understood and observed on a daily basis. Its management team's strong commitment to the quality system is evident in the company's Prioritized Action Plan for Continuous Improvement (PAPFCI), which is reviewed and approved by the company's outside board of directors. The document clearly defines specific objectives by part number or process and identifies champions responsible for the action items.

Each quarter, senior staff meets with all managers to review the progress made on the PAPFCI. Senior staff also meets with department managers weekly to review current issues, such as customer complaints, efficiencies, and delivery performance. In addition, OKAY's president holds a monthly communications meeting, where key items--including monthly quality and delivery performance analysis--are reviewed with all employees.

OKAY uses an enterprise-management system, called Plexus Online, to help manage data so that empowered employees can make informed decisions to control the company's products and processes. The system also tracks problem controls, which are broken down into customer complaints, internal audit non-conformances, supplier corrective actions, machine and equipment failure, audit findings, and continual improvements. The corrective action system automatically sends e-mail reminders to those required to perform each action item. Problem solving is a team effort, as 30 employees are trained in several problem-solving techniques. Numerous items are used to enhance Okay's preventive-action processes, including a Process Ready Check Sheet, which ensures that each operation is ready to begin production and requires a sign-off by the manufacturing and quality departments.

OKAY works closely with its suppliers, and performed numerous on-site supplier audits, including a review of processes, documentation, and results of year-to-date shipments and corrective actions. When an issue arises with a supplier, OKAY issues a supplier notice (SCAR). When OKAY began the program, 144 Supplier Corrective Actions were issued; the next year the SCAR count had declined by 51 percent. Three of OKAY's key suppliers attended extensive root-cause analysis and problem-solving classes, and the drop in supplier-related issues is an indication of how well the supplier partnerships are working.

The company also participates in second- and third-party assessments. OKAY was visited by or audited by eight customers, and received successful audits from all. In addition, the company undergoes bi-annual ISO/TS assessments, and the last four audits have netted only one minor non-conformity. Throughout the year, a team of 12 internal auditors perform audits that touch on each process and the requirements of TS 16949 and ISO 9000:2000.

E.J. Ajax & Sons, Inc., a Fridley, Minnesota producer of medium- to long-run progressive-die metal stampings, received the SKD Automotive Group Productivity Award for taking over complete parts production from a customer and compressing the entire value chain from several weeks to literally hours. Sponsored by SKD Automotive Group, Brampton, Ontario, the Productivity Award recognizes outstanding achievement by a PMA manufacturing member in the development and implementation of programs, processes, and use of assets that lead to significant improvements in productivity.

The customer, Radius Track, a maker of metal tracks that allow for curved drywall surfaces, initially produced parts in-house to control quality and protect the proprietary portions of its manufacturing process. Once the company established market demand for the tracks, it contracted with E.J. Ajax to design tooling and perform stamping operations on the track. E.J. Ajax then would ship the product back to the customer for bending, crimping, packaging, and shipping. This process required three to four employees at Radius Track and six operators on six machines at E.J. Ajax. Production from start to finish--including shipment of parts back and forth--took one month.

Through continuous productivity improvement, E.J. Ajax defined methods to perform crimping, then to produce the entire part and also package and ship directly from its plant. "A big customer can order 15,000 to 20,000 feet of track at a time," said Bob Krebsbach, president of Radius Track. "Before, the cycle time was longer than the time between the customer's order and the required delivery date. That meant we had to keep expensive inventory on hand. Now, E.J. Ajax doesn't start to make the product until it receives the order. All non-value-added lead time and inventory have been eliminated. Its ability to take over production has enabled Radius Track to manage significant growth without having to worry about supporting customer demand. From a financial standpoint, overall costs are less, and our cash flow is not tied up in storing finished goods."

The team tasked with improving the manufacturing process for Radius Track came from the E.J. Ajax tool room as well as from its maintenance, production, and engineering departments. "We put people in charge as change agents to follow through and do the research and development," company owner Erick Ajax said. The team's goal was to develop a continuous-flow operation that would fit in a designated 60-ft.-wide bay. To limit capital expenditure, Ajax personnel were able to retrofit two used stamping presses, a coil arbor, feeder, straightener, and press brake with state-of-the-art controls and sensors for on-demand inline production. The continuous-flow cell includes feeding, straightening, blanking, 90-degree forming, crimping, packaging, and labeling. The team worked through a total productive maintenance plan for the process, including all machinery and tooling, and determined correct positioning of sensors and operators. As a result, the uptime of this continuous-flow cell exceeds 99.8 percent.

Process innovation enabled Ajax to take over the entire operation from Radius Track while reducing its own production personnel responsible for the work from six to three. A simple materials-handling-process improvement suggested by one of the E.J. Ajax production-line operators brought the total number of workers required to two. One operator runs three machines while the second operator performs finishing and runs packing operations.