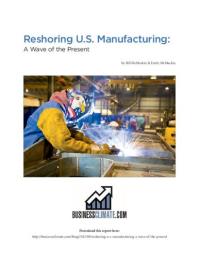 Some large companies have recently set a precedent for bringing work home, showing that the Made in America trend is not just about national loyalty, but also about strengthening the bottom line.

The reshoring movement is no longer just a ripple in a pond. It's a wave in the ocean. The players are bigger—namely Apple and GE—and the global stage is broader, affecting not just China, but other parts of Asia, Mexico, and Europe. As many big players are rethinking why they outsourced overseas in the first place, business is returning home, powered not just by the feel-good glow of bringing work back to the U.S., but also by improving the bottom-line.

The reshoring trend has proved a popular topic with politicians, even garnering the presidential limelight in State of the Union addresses. And while President Barack Obama has met with company executives and industry experts in 2012 to ask them how the U.S. can continue to build the reshoring momentum, many large companies have fallen in line and set a precedent. General Electric announced in early 2012 that it was opening a water heater plant in Louisville, Ky., shifting jobs back from China. Caterpillar picked a site near Athens, Ga., for a plant that will build small tractors and excavators that were previously made in Japan. And Apple Inc. announced last December plans to bring manufacturing of one of its Mac computer lines back to the U.S. in 2013, preparing to invest $100 million in the endeavor. And with new tax proposals that include eliminating tax advantages for moving work overseas and rewarding companies for creating jobs in the U.S., it seems likely more companies will look into reshoring.

According to recent surveys, more U.S. companies are catching the reshoring wave. An August 2012 MIT survey showed that of the 108 U.S.-based manufacturing companies polled, 14 percent plan to move some of their manufacturing back home. That 14 percent can leave a large economic footprint: The MIT survey included companies ranging in size from annual sales of about $20 million to more than $25 billion, with most being over $1 billion. Another recent survey, by Boston Consulting Group, found that more than one-third of U.S.-based manufacturing executives at companies with revenue greater than $1 billion planned to reshore production to the U.S. from China. This could create up to 3 million U.S. jobs by 2015 and an estimated $100 billion in annual output in a range of industries, according to the study. That's good news for the U.S. economic recovery, which, according to the U.S. Department of Labor, has been led by manufacturing job growth that totaled about 500,000 new jobs between January 2010 and June 2012.

Since the 1970s, U.S. manufacturing has shed millions of jobs by outsourcing work to lower-wage locations, such as China. But with rising wage rates in China acting as one of the driving factors in bringing manufacturing jobs back home, lower-cost labor states in the Southeast and Southwest United States are looking attractive to large companies like Caterpillar, as well as NCR, which plans to add 370 jobs at a new Columbus, Ga. plant by 2014.

The gears of a reviving U.S. manufacturing sector are being oiled by a reshoring movement that promises the U.S. new jobs and a more innovative marketplace while enabling companies to not only be good corporate citizens, but also improve the bottom line by lowering the total cost of their products.

With such tools as the Reshoring Initiative's Total Cost of Ownership (TCO) EstimatorTM, which helps account for all relevant cost and risk factors associated with offshore versus domestic manufacturing, companies are running cost analyses that show products can be made less expensively in the United States, especially when such factors as rising costs of fuel and shipping, along with IP infringement and exposure to natural disaster risks, can disrupt supply chains. The two biggest recent natural disasters were the earthquake and tsunami in Japan and the flooding in Thailand, which hurt many large U.S. manufacturers, including Intel Corp., Toyota Motor Corp., and Sony Corp.

According to a recent report by BusinessClimate.com, entitled "Reshoring U.S. Manufacturing: A Wave of the Present," some key facts about reshoring include:

"When offshoring began, it was all about lowering labor costs and unit costs," Simchi-Levi said at a conference last July. "Later on, it was to capture financial incentives offered by local governments. But as companies began operating global supply chains, they realized there were other costs they did not take into account when they made their offshoring decisions."

After a recent online debate held by The Economist, entitled "Do multinational corporations have a duty to maintain a strong presence in their home countries?" Reshoring Initiative founder Harry Moser said: "As I have repeatedly documented, approximately 60 percent of companies make sourcing and investing decisions based on labor rates, ex-works price, or landed cost, ignoring 20 percent or more of the total cost. Multinational corporations (MNCs) far too often do not see past a low price to reveal a much higher total cost. We insist they make better-informed investment and sourcing decisions: offshore versus home and long term versus short term."

Moser went on to state that the Reshoring Initiative's free Total Cost of Ownership EstimatorTM has shown that "in their excessive focus on offshoring of manufacturing, many multinational corporations make suboptimal decisions, actually reducing the long-term return to their shareholders. Thus, many MNCs will more fully maximize returns for shareholders if they maintain a stronger presence." Moser went on to state that behaviors exhibited by MNCs have too often included "ignoring a whole range of medium-term risks: IP loss; impact on innovation; and loss of competence and control due to increasing reliance on offshore outsourcing firms. The further a firm is removed from the manufacturing of its products, the harder it is to evolve and make future related products."

Industry expert Michele Nash-Hoff has written extensively in her book, Can American Manufacturing Be Saved? (second edition now on sale as paperback and eBook) that MNCs ignore the hidden costs of doing business offshore, such as quality problems, legal liabilities, currency fluctuations, travel expenses, difficulty in making design changes, time and effort to manage offshore contracts, and cost of inventory.

Nash-Hoff said it is her opinion that MNCs have "more than a duty to maintain a strong presence in their home countries." She went on to say that if a U.S. company is a loyal, faithful, devoted citizen of the United States, this means that "you take actions in your personal and business life to support your country and do not purposely take actions that may cause harm to your country. Moving a majority of manufacturing to other countries, especially China, is doing harm to your country, since China has a written plan to replace the United States as the world's super power. Therefore, American manufacturers owe allegiance to the United States of America by manufacturing in the U. S."

Beyond the "good citizen" motivation to reshore are two factors that have been growing in prominence as companies weigh their manufacturing options. First is the recognition of the need to locate manufacturing operations close to design and engineering facilities. This helps spur innovation and enables manufacturing to respond more quickly and with more flexibility to design changes and engineering change orders, shortening time to market.

The second emerging consideration is manufacturers' and brand owners' desire to locate manufacturing operations close to their customer base where they will be selling their products. In addition to reducing transportation costs, this helps manufacturers to more easily incorporate design feedback from their customer base. Last November, Caterpillar Inc., the biggest construction and mining equipment maker in the world, picked a site near Athens, Ga., for a plant that will build small tractors and excavators reshored from Japan.

"The markets for smaller track-type tractors and mini-excavators have evolved significantly in the past 30 years, with the majority of customers now located in North America and Europe," Mary Bell, vice president for Peoria, Ill.-based Caterpillar's Building Construction Products division, said in a statement. "Producing these machines at a North American location will put us in the best possible position to serve our customers in the building construction industry."

Nash-Hoff highlighted some of the major advantages to keeping manufacturing operations close to a company's customer base:

What's Coming Back and Where is it Going?

Some industries, more than others, are riding the reshoring wave, according to experts. The MIT survey noted that the major players are food and beverage manufacturers, electrical equipment manufacturers, motor vehicle manufacturers, and parts manufacturers. The Boston Consulting Group study identified seven key industries in which the rising costs of producing in China would make it more economical to shift to the United States:

With rising energy costs and a greater demand on global energy, it has become more expensive to ship larger products from overseas. Caterpillar Inc. has reshored some of its tractors and excavators to Athens, Ga., and NCR, which builds ATMs and self-service kiosks, is reshoring from China, Hungary, and Brazil to Columbus, Georgia.

The rising cost of energy makes transportation more expensive and is coupled with the rising labor costs in China. The Boston Consulting Group predicts that China's cost advantage will drop to single digits after factoring in inventory and shipping costs, with productivity-adjusted labor costs effectively converging by 2015.

Lower-cost labor states in the Southeast and Southwest, along with states that offer a highly-skilled labor pool, are attracting the most reshored manufacturing. A recent analysis by CNNMoney found that openings for skilled manufacturing jobs are up 38 percent since 2005 and more than 150 percent in the last three years.

Research conducted by Pepperdine University demographer Joel Kotkin pinpointed communities that are leading the revival in U.S. manufacturing. While Texas, as well as low-labor states, took some of the leading spots, so did cities that are more known for high-skilled labor. The Seattle-Bellevue-Everett, Wash., area took the top slot, showing that attractive business costs, a favorable business environment, and a pool of skilled workers can fuel the reshoring wave. Kotkin's Top Ten Manufacturing Growth Regions were:

The U.S. manufacturing sector seems poised to handle a reshoring trend that could invigorate a U.S. economy, create jobs, drive research and innovation, and play an important role in strengthening the nation. The ongoing trend to bring work home indicates that U.S. workers and cities can compete on a global scale to actually strengthen companies' bottom lines and strengthen U.S. manufacturing. While more and more company executives are looking beyond baseline price to factors like labor costs, shipping costs, and energy costs, catching the reshoring wave is becoming an attractive option not only for its cost-cutting sensibility but also its "Made in America," feel-good payoff.