This technical information has been contributed by
Devon Precision Industries, Inc. 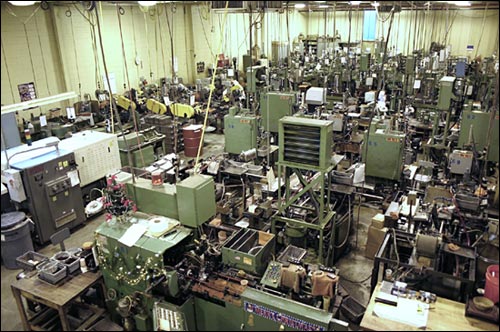 The ability to make complex parts in one setup, with greater flexibility and faster turnaround on short run work, is a major advantage over cam-driven Swiss machines.

Instead of sacrificing its future growth to conventional technology, one precision machine shop has profited from new CNC (Computer Numerical Control) Swiss machines. Devon Precision Industries (Wolcott, CT) has expanded its capabilities by acquiring three Conquest ST220 six-axis Swiss-turn CNC lathes from Hardinge Inc. (Elmira, NY). All purchased within the past three years, the CNC Swiss machines have enabled Devon to generate more profit on short run jobs. These demanding precision jobs for medical, automotive, telecommunications, and aerospace customers now represent about 5% of Devon's business, and their share is increasing.

Devon brought in their first Hardinge lathe after trials comparing its performance with three other CNC Swiss machine manufacturers. The company sent blueprints for the same trial part to each potential supplier. After the parts were delivered, Devon's representatives visited the manufacturers' facilities, verified the data, and conducted a spares availability test. Because Hardinge outperformed the other suppliers in the performance testing and support evaluations, Devon placed the order with them.

Devon's migration to CNC machines from conventional cam-driven Swiss machines reflects the changing nature of today's workforce. Currently, more workers are experienced in CNC machine operation, with programs stored in computers and downloaded to the machines. In addition, Hardinge was included in Devon's initial short list because they were already a reliable supplier of collets for Devon's conventional Swiss machines. According to Devon president Yvon Desaulniers, Hardinge is the only U.S. manufacturer of this type of machine. "We had negative downtime experiences in the past because we had to wait for parts," he says. "So we made spares availability a part of our vendor evaluation."

The trial run requested of each supplier involved making a part made from 0.236" diameter A-2 tool steel. The trial required eight operations: face and turn; milling the part in half; insertion of a skive slot; milling two chamfers; combination spot/drill; tapping (3-56); cutoff and transfer to sub-spindle; and air blast to eject the part. The transfer to the sub-spindle was tricky because it required a special collet shape and synchronization to permit insertion of the non-symmetrical part.

On the test part, Hardinge's Conquest unit performed the necessary operations with shorter cycle times per part, and it held tolerances better than the competitor's CNC Swiss machines. "The Hardinge CNC Swiss machine is faster and easier to program, and it provides readier access to tools," says Desaulniers. "These features add up to more productivity per usable hour of machine time and more usable hours overall, compared to other CNC Swiss machines."

The Conquest's heavy Harcrete base provides better damping characteristics than cast iron, resulting in 30% longer tool life and better finish. "The machine base is paramount in producing parts with close tolerance and fine micro-finish," says Desaulniers.

The team also reviewed the support capabilities of each vendor. Tom Hintz of Hardinge recalls, "Mr. Desaulniers took a parts manual for the ST-220 machine he was interested in buying into our parts department. He opened the book and read off 10 parts he had selected beforehand. He wanted to know if he could expect immediate delivery of these parts; and, if not immediate, what the target delivery date would be." The Hardinge support organization outperformed its competition, according to Desaulniers. They had eight of the 10 parts in stock and needed no more than a week to deliver the other two.

Cutting Setup From Days to Hours

The precision machining capabilities of the Hardinge CNC machines can be illustrated by two other parts recently fabricated at Devon. They are a plunger guide for a mechanical device and a small piston for a fiber optics assembly. The Conquest unit is able to handle the complex plunger guide with ease. Its indexing headstock spindle mills the two flats and the elongated window, which requires a 10 Rms micro-finish and a tolerance +/- 0.0003". The small piston presents even more demanding requirements: a more difficult material (52100 bearing steel); closer tolerance +/- 0.0002"; and a micro-finish 8 Rms.

Desaulniers notes that, over time, the real benefits to his business began to appear when he compared the CNC Swiss machines' productivity and profit-making potential to conventional Swiss machines. A typical job on the cam-driven machines takes about two days, or 18 hours, to set up. With the Hardinge CNC units, Devon gains at least 12 hours on every job. Setup typically takes two to four hours. Desaulniers recalls one high-margin job involving 200 pieces each of three parts: all three on the same program, from the same bar.

Once the program is written, the instructions for making the part are stored in the control unit. Desaulniers reports that, little by little, the younger programmers have been able to gain experience by watching the seasoned machinists. As more manual set-up data is captured, the set-up times are reduced even further. Devon has standardized the toolholders in their three Hardinge CNC Swiss machines. This cuts set-up time even more because some set-ups require only minor adjustment. In addition, the programming for all three units is performed by the same engineer.

The adaptability of the CNC Swiss machines' setup often eliminates the need for secondary operations needed with conventional Swiss machining. This has substantially reduced the time and labor needed for making fixtures and performing secondary preparations. The key to higher profits has been the Conquests' ability to exceed the technical limits of what a conventional Swiss automatic machine can handle; especially in the case where a typical short-run job might call for more than 16 operations.

The conventional machine is limited to eight tools, and two or more separate setups would be required to complete the part. In addition, any given operation must be performed within a 360 degree turn, limited by one revolution of the cam. By comparison, Hardinge's Conquest permits up to 19 operations on one part from a single setup, providing much greater flexibility. When working with exotic materials, the CNC unit can even deburr the part during processing. Deburring is more difficult with a cam-driven Swiss machine and requires a dedicated operation.

Preparing for a More Automated Future

Over its 34-year history of excellence, Devon has built a loyal customer base. The company relies on its 200 conventional cam-style Tornos BechIer Swiss automatic turning machines to produce approximately 1.2 million pieces each week. "Almost all of our conventional machine business is repeat business," says Desaulniers. "The conventional machines are best for runs over 50,000 pieces. We run them at full capacity two shifts a day, six days a week."

About five years ago, Devon began to prepare for the future of the precision machining industry. Several trends were evident: many more runs were short, in the range of 10,000 to 25,000 pieces; there was a greater likelihood of complex jobs requiring more than eight operations--the limit of a conventional machine; and there was more need for quick turnaround and "design on the fly." In addition, more parts were made of exotic materials such as Inconel, titanium, and Kovar; and, the skill set of the younger labor force was more suited to computer programming than the gradual acquisition of know-how from older machinists.

Desaulniers took several steps to prepare for what he saw down the road. He embarked on a 2 1/2-year comparative evaluation of CNC Swiss turning machines. He recruited computer-literate young machinists from an 8,000-hour apprentice program operated by the State of Connecticut. He obtained ISO 9002 registration under the auspices of KPMG Peat Marwick (one of the first U.S. screw machine companies to get it).

Desaulniers also launched a 20-year program to upgrade his cam-driven machines. Remanufacturing them involved stripping each machine and changing all the bearings and moving parts to bring them up to today's tolerances. To date, about 15% of the conventional machines have been upgraded. "We knew we could not fully replace the steady work flow of these machines because it required too much capital to replace them all. However, we could start the trend to increase our flexibility and profit margin," says Desaulniers.

The added capability represented by the Hardinge CNC Swiss machines has led to business from new industries where precision manufacturing commands a premium price. This includes medical equipment manufacturers, valves and solenoids for industrial process machinery, telecommunications components and assemblies, and aerospace work. "Almost all of-our business now comes from Fortune 500 companies," says Desaulniers. "Our reputation for flexibility and precision has continually increased utilization of the Hardinge CNC Swiss machines at Devon. I look forward to the day when we will add to our capabilities by purchasing more of them."

This technical information has been contributed by
Devon Precision Industries, Inc.