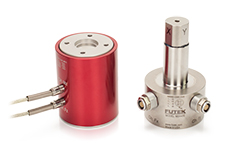 Futek Advanced Sensor Technology has built a reputation for producing quality sensors for over a decade and recognizes that high Reliability is one of the most important features of its products. This paper describes documented field experience and long-term accelerated life testing of our sensors. It derives Reliability factors and determines the MTBF based on accelerated life testing. The MTBF of our typical sensors is determined to be more than 166 million cycles within a 90% confidence interval. Other conditions and factors affecting Reliability are discussed.

Product Reliability is an essential aspect of overall product Quality. This paper discusses some of the documented successes we have achieved in the area of Reliability. We have always promoted the reliability of our products by assuring that all of our units are consistently designed using the same conservative engineering design margins, are manufactured to the same tight tolerances, use the same high quality gages and undergo the same rigorous calibration procedures. We even offer some models of "fatigue rated" load cells. This is achieved this by derating the S-N curve to cut the normal stresses in half. These will certainly last longer than the non-derated models, but this qualitative assessment is based on analytical results, not on actual laboratory test or field data.

For more quantitative results we can look to our success with the L2341 model load cells delivered to a single customer in 2002. We delivered 13,500 units over an eight-month period and experienced only three failures due to manufacturing defects. This is an exceptional accomplishment, representing a success rate of 0.999778, or return rate of 0.022%. In terms of "Six-Sigma Quality" fundamentals this would represent a 5-sigma process. Still, this is not purely a Reliability number, but rather a manufacturing process capability measure. To be able to quote Reliability factors associated with this performance, we would have to understand more about the operating hours, the application, duty cycles, stresses and environment. Additionally, we would need to understand the root cause of any failures to determine if they are attributable failures from a Reliability standpoint. All of these factors go into determining the Reliability of a product population. None of that customer data is available to us, but we can still point to this as an example as an exceptionally fine manufacturing process capability, a measure commonly referred to as CPK.

We have done significant long-term accelerated Reliability life testing with our model LSB302 technical paper on the gauge (100 lb) "S-Beam" load cell. This aluminum load beam is very representative of the load cells we produce. The accelerated life test began in August of 2001 with the unit being loaded at 3 cycles per second to 113% of rated output at room temperature. At the life test reached 180 million cycles, the load was increased to 150% of rated. The unit has completed over 300 million cycles and continues to operate normally. Every three months the unit is removed from the test stand and run through full calibration procedures to confirm and document its characteristics. If we assume the average stress over the life of the test to be 128%, we can say this accelerated stress test is roughly equivalent to 384 million operating cycles at rated stress. Unfortunately, there have been no failures for the one unit on test. Without any failures, we cannot compute a true failure rate. Ideally, you would prefer to run many units at high enough stress to generate some failures. Then a true failure rate can be computed using the failure data combined with the suspense data (data on the units that had not failed).

We can, however, compute a "mean life" based on a one-sided Chi-squared distribution within a specified confidence limit, say 90%. We could then say that we are 90% confident that the mean life or MTBF is at least so much. The calculation goes like this:

Based on this test we can assert that we are 90% confident that the mean life or MTBF of this sensor exceeds 167 million cycles. This applies to the entire population and implies that, although one unit has exceeded 300 million cycles, in a large population some of them would have failed earlier and some later. What this really means is that we are 90% confident that the MTBF of this model lies between 167 million cycles and some upper bound much larger than 300 million cycles. It should also be understood that this estimate applies to the overall population and that any particular sensor's Reliability will depend on the specific application, the direct and axial loads applied, and to a lesser extent, the environmental and vibration stresses it is subjected to. Overloading, elevated temperatures beyond spec and extraneous loads can severely degrade the performance of any sensor. One other note about expressing capacity numbers - since load cells are not repairable, we are really measuring mean time to [first] failure, MTTF. However, it is common in the field to refer to this Reliability measure generically as MTBF, with understanding that it applies to the first failure occurrence since the units are non-repairable. The math is the same for both, only the nomenclature differs.

As the unit under test continues to operate successfully, the 167 million cycles Reliability estimate can be recomputed and will continue to grow until a failure is experienced. This estimate represents the inherent or optimum Reliability of the component in a totally benign environment with no extraneous stresses and is not derated for any environmental factors. It is also important to understand that we are stating the reliability for the entire system, not just the flexure. Everything is under test including the flexure, gages, wiring, solder joints, terminals, adhesives, curing and coatings. That includes every element in the system that could cause a failure. The aluminum flexure, stressed within limits, is probably one of the lowest failure rate elements in the system. If we had the data, we could predict the inherent sensor failure rate by combining the individual failure rates. That would look something like this (using the 149 million cycles as an assumed failure rate):