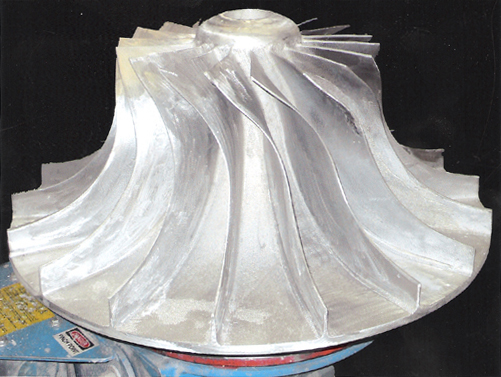 How many manufacturing companies can say that they've been in operation continuously since 1860? Whitman Castings Inc., can trace its history back 152 years, when it worked on the boiler for the famous iron Civil War ship, the Monitor. Although steel came into its own in the early 20th Century, the Whitman, Mass., foundry is still building iron parts for a wide variety of American industries.

When steam power was coming into its own in the 19th Century, boilers and other types of sand casted iron parts were in high demand. "There's no new technology with this, except we check the molten mixture with a digital device," says Marty Carrigan, the national sales manager for Whitman Castings. "There are fewer and fewer companies in this country that make iron parts. A lot of iron manufacturing has gone offshore, especially the high-volume work. Also, iron foundries are very dirty, noisy, and extremely hot, so it's still a blue collar type of work place that most people don't want to be involved in these days."

The present owners, brothers Francis Ladner and Brian Ladner, took over ownership of the company in the early 1990s. Brian is the president and Fran is the VP of operations. Many of the company's customers are in the New England area, but they also extend to the Great Lakes area and down into Georgia, the Carolinas, Alabama, Texas, Oklahoma, and one in the state of Washington.

Whitman Castings (www.whitmancastings.com) is still competitive in a high-tech world because the iron foundry deals in small production runs of mostly custom work. The company supplies sand castings that are used for parts in compressors, pumps, valves, industrial machines, and elevators. "For the elevator parts, think of the cables that wrap around the pulleys at the very top of the shaft," Carrigan explains. "There will be a big, round pulley made out of solid cast iron. We make the pulleys that are about six feet in diameter and 18 inches wide, but we did make one once that was ten feet in diameter. We also make a lot of parts for industrial machinery, or other mechanical equipment."

The venerable foundry also makes large railroad parts for the drive mechanisms and engines on locomotives. So versatile is the iron maker that it routinely shifts from two-ounce castings up to massive 10,000-pound parts. "We're what they call a job shop type of foundry," says Carrigan. "We mostly get involved in small production volumes, as low as one piece. But we often turn out ten to 20 pieces in a production run, and it's mostly custom work that we do."

Not only does the company provide heavy industrial parts, but it also makes decorative, architectural parts, like 300-year-old artistic fences and hitching posts. One such project consisted of replacement parts for an historic, wrought iron fence around Boston Commons that includes gates and hitching posts. "When they get damaged, we replace a section of the fence," Carrigan explains. "You can't tell the difference between our replacement parts and the ones that were originally built in the 16oos or 1700s. We've also built three sets of gates for the White House, and we've replaced fences and gates on old, historical brownstone houses in New York City."

The owner-operated foundry is proud of its skilled, dependable staff and many longtime customers. "The average years of service for some of our employees is about 20 years because we treat our staff very well," says Carrigan. "And we have customers that have been with us for 10, 15, and 20 years because we give them excellent quality and service."