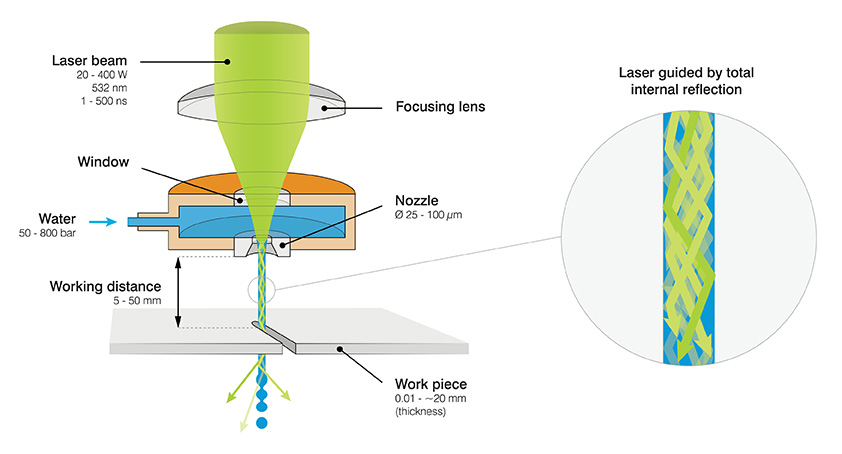 A new micro-machining center in Silicon Valley offers cutting and dicing services for the semiconductor, medical, and other quality-sensitive markets.

"Customer response has surpassed expectations," said Dr.  Bernold Richerzhagen, president and CEO of Synova, in a company release.  "The opening of the California MMC complements well our similar service centers in Europe and Japan, through which we are constantly discovering innovative ways to leverage the Synova technology for the benefit of our customers."

Synova's Laser MicroJet technology is said to be unique in its use of water to guide the laser beam to its target surface, in a manner similar to that of a fiber optic guiding light. Guiding the laser with water offers many advantages, according to Jacques Coderre, Synova-North America's U.S. business manager. By cooling the surface of the material to be machined, water reduces the heat affected zone (HAZ), a vulnerable area that's prone to micro-cracking. "The water also cleans the surface between and during the laser pulses, an action that reduces the re-deposition of material and burring," said Coderre in an email response. "It also creates a parallel beam, which improves the working area and generates parallel side walls."

"Since it's patented, there is no other laser technology like it," Coderre said in a phone interview. "Laser cutting typically has significantly higher precision than metal stamping, wire EDM, or other techniques used for machining. We get smaller features and tighter tolerances with this laser. For example, if you have applications where you have a very tight radius of curvature, then these traditional machining techniques will have difficulty achieving that, and you need to go with something that is more accurate. And within the family of laser machines, the Synova laser differentiates itself because of the use of a water jacket, which translates into higher quality more than higher precision."

The Fremont center is equipped with an LCS 200 Laser MicroJet® machine, said to be a more efficient cutting tool due to its patented, low-pressure water jacket technology. "Synova is the only company out there that uses this water jacket concept," Coderre remarks. "The water is used a bit like a fiber optic source that guides light. So the laser actually bounces off a water wall, or jacket, which enables you to have a nice parallel beam, compared to a diverging beam with a traditional laser."

Traditional lasers use lenses to converge the beam on a focal point. "If the piece is out of focus, then you have diverging light and you lose efficiency," says Coderre. "The water jacket has the benefits of keeping the laser nice and parallel. So even if you're out of focus, or out of range of the sweet spot, you still have the efficiency. This translates into larger working envelopes. For example, we can cut a 10 mm diamond without having to turn it around and dice it on each side because the beam is parallel."

Synova S.A. traces its roots to Lausanne, Switzerland, near where the company is headquartered in Ecublens. In the early 1990s, at the Federal Institute of Technology in Lausanne, Synova's founder and now president and CEO, Dr. Bernold Richerzhagen, successfully developed the world's first water jet-guided laser—a groundbreaking technology previously attempted by many scientists without success. Dr. Richerzhagen invented and developed the liquid-guided laser between 1993 and 1996. He founded Synova in 1997, and continued to advance the technology while heading the endeavor to build up a global company. He has received numerous Swiss and international technology and entrepreneurship awards, and is a frequent author of articles in scientific journals and books, as well as a guest speaker at renowned conferences. Dr. Richerzhagen holds an M.S. in mechanical engineering from the Technical University, Aachen, and a Ph.D. in Microtechnics from the Federal Institute of Technology, Lausanne.

Coderre emphasizes that the profound cooling effect provided by the water is a major advantage of Synova's patented laser system. When lasers are typically used for cutting, he says, the basic mechanism is laser ablation. "You create tremendous local heat and you create a plasma, which is how the material is removed," he explains. "So the temperature is very high at that area. What the water does, in this case, is actually cool the surface. In the end, that translates into a significantly less heat-affected zone. This is where a lot of the reliability issues come in, like micro-cracks. The high heat generates a lot of stress, but the water reduces the stress, reduces the cracks, and improves quality and reliability."

Another advantage of the water action, he explains, is that it cleans the area being processed. "As you ablate this material, like a volcano, the material has a tendency to redeposit at the surface," says Coderre. "It also creates what's called a recast, which becomes hard and very difficult to remove, so you have to find some way to clean it. The MicroJet water action cleans that material before it has time to redeposit and solidify, and it keeps a nice clean surface. So there is significantly less recast, which means significantly less post-lase cleaning processing, and significantly less chips and burring. That's how we get the highest quality laser cutting in the marketplace.

The water jacket also gives the laser a nice parallel cut, whereas many conventional laser cuts are V-shaped. "Because of this focal point and the diverging beam outside of the focal point, you have a nice straight wall, so you can have a tighter kerf, and the width of the cut is significantly tighter than with many other applications," says Coderre. "The tight kerf has great interest in the marketplace."

As a micro-machining process, the Laser MicroJet technology is well suited for a variety of applications that require close tolerances, high quality, and very small features. Although the types of parts vary greatly, they typically measure less than 12 x 12 inches, according to Coderre.

"The parts are not necessarily small, but the features being machined are," he explains. "Micro-machining implies that features are measured in microns—1 millionth of a millimeter. A human hair is typically between about 40 microns and 100 microns. The next level down would be nano machining.

In addition to surgical blades and stents, applications for the Laser MicroJet in the medical sector are reported to include implants and tubes (such as cannulae, needles, or endoscopes), as well as integrated circuits used in medical devices, according to the company's website.

Another application that's said to be ideal for the machine is diamond cutting, especially for cutting expensive, precious gems. Synova just sold a significant number of its machines to the gem industry. "People that cut stones are very excited about this technology because you lose less diamond material and you have a nice, tight cut," Coderre affirms. "Also, there are stones in the industry called stress diamonds, which are prone to breakage. Because of the machine's temperature control, we've saved more stress diamonds. So, gem diamonds are a very important area for us right now, as well as industrial diamonds. Industrial diamonds are used for drilling tips, saw tips, and tooling inserts, whenever you need something very hard."

Coderre says that Synova's laser technology is a good fit for thin materials, hard materials, and ceramics. Although other wavelengths are used, the key wavelength used with the Laser MicroJet is 535nm (green lase), said to be a particularly good fit with most metals. "Hard materials and ceramics are a great fit because the heat-up is usually a major problem," says Coderre. "The water cooling effect enables high speed and higher quality."

The technology is reportedly best suited for semiconductor dicing of silicon and III-V materials; machining of thin metals and ceramics for industrial and medical applications; and cutting of hard materials, such as monocrystalline and polycrystalline diamond (CVD, PCD), cubic boron nitride (CBN) or Silicon Carbide (SiC).

"There are also a lot of thin metal applications in the watch industry, for example," says Coderre. "Being a Swiss company, one of our key areas is the manufacturing of very intricate watch parts." The harder the material being cut, the higher the temperature goes as more energy is needed. "Eventually, the part is so hot, you have to slow down or reduce the energy you're putting in so the part won't crack," he continues. "So when you cool it, now you can cut very hard material with a very efficient speed because of this temperature control."