This technical information has been contributed by
Wepco Plastics 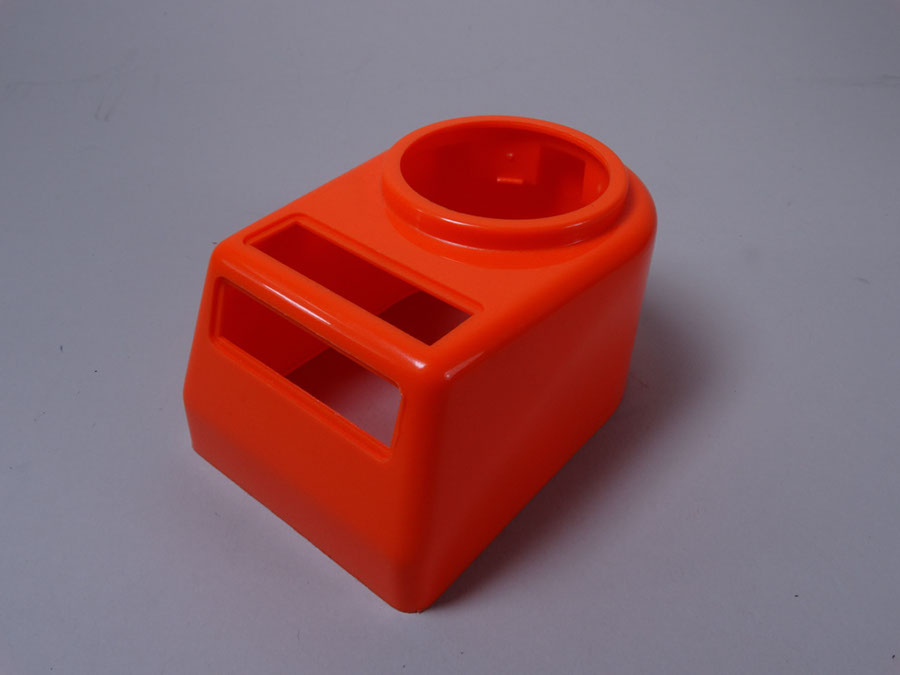 A prototype and short-run injection molder combines part design and engineering expertise with an inexpensive approach to moldmaking.

Plastic injection molding is prevalent in North America for a variety of applications, but only a handful of contract molders specialize in supplying injection-molded prototypes. To provide plastic prototypes economically and expediently, a contract manufacturer must not only have expertise in the specialty, but should also know the intricacies of building molds out of the many aluminum alloys that are now available.

Wepco Plastics, Inc., of Middlefield, Connecticut, is a job shop that specializes in manufacturing injection-molded prototypes and in performing short run molding. Yet the company does not shy away from building high-production, steel molding when necessary.

"Because we use CAD/CAM and 3D modeling software together, and then machine the aluminum tooling on CNC machining centers, we can make plastic prototype tooling very economically," states Wally Parmelee, the president and owner of Wepco Plastics. "We are in business not just as molders, but to help a client with product development. In this way, we can assist them in bringing new products to market inexpensively and quickly."

Wepco's prototype tooling is built in-house in a variety of aluminum alloys, which reduces the capital costs of moldmaking a great deal. Engineers are aware of how important prototyping can be before going into high production, not only to make sure that the part assembles easily and works properly, but also to ascertain that its appearance is favorable.

"Medical devices are a good example of how important appearance and feel can be," said Parmelee. "If a nurse or doctor doesn't like the feel of a tool, they won't use it. I have a medical tool company that prototypes everything. This way they can test it in a particular market before they go into the production phase."

The company's president says that other injection molding shops sometimes handle prototyping, but he believes Wepco is more efficient than shops that do it as a sideline. "We specialize in prototyping and we have many years of expertise in this area," Parmelee points out. "We are one of the largest prototype moldmakers in the New England area, although we now have business all over the U.S."

Other means of prototyping exist, but offer varying levels of quality and materials variety. Urethane cast prototypes have been in existence for many years, and rapid prototyping systems namely, stereolithographic (SLA) modeling are now prevalent. "These rapid prototyping processes are more cost effective in some cases," Parmelee comments. "But if someone wants a prototype part in a particular material, there is only one way to do it, and that is with injection molding. Many of our customers are SLA houses," he adds.

Plastic injection molding is similar in process to die casting, except that molten plastic, rather than molten metal, is injected into two mold halves. The hot plastic is forced with hydraulic pressure into the mold cavity, with pressures ranging from 10,000 to 30,000 psi. After a set amount of curing and cooling, the mold halves are opened and the part or parts are ejected. Complex shapes and intricate designs with good dimensional stability are feasible with injection molding.

Almost any type of plastic can be injection molded in a variety of colors, sizes, and shapes. Among the factors that affect quality of the output are injection pressures and temperatures, polymer ingredients, cycle times, tooling design and hardware, and the flow of the molten material.

Before starting a project, Wepco looks at the job from both design and manufacturability standpoints. First, the company determines whether the part will fit precisely into multiple-part assemblies, and if so, how parts will fit together. Next, they formulate how to arrive at the proper appearance, because many different finishes can be added, including highly polished, rough, satin finish, or textures such as wood grain, leather, or pebble.

Material selection is also very important, especially since there are thousands of plastics on the market to choose from. Considerations include how durable the part will need to be, whether it will be exposed to acids or other chemicals, and in what environment it will be installed. Wepco also makes suggestions about how to insert mold fasteners, snaps, or clips, or if they should be installed during assembly.

Wepco recommends that engineers not familiar with the process come to a qualified prototype builder for suggestions, even if the part is still in the idea stage. For conceptualization and production planning, the company has on-staff designers who use three computer-assisted design stations. And, most of its machining and molding equipment is CNC-operated for added efficiency.

"We walk engineers through all the steps of design and manufacturing, and offer tips that will save them time and money," Parmelee said. "The moldability of a part is very critical. One thing that engineers can do to overcome problems down the road is to make sure there are proper drafts on the part," he continued. "These are angles on the outside of the part; one degree off will cause the part not to eject. If it doesn't eject properly, scratches or scuffs will mar the part when it is removed, or it may not even pop out of the mold at the end of the cycle."

Besides prototyping, Wepco performs short run molding; its average run is about 2,000 pieces. Some clients order 10,000 pieces per year, but only want small amounts doled out periodically. Parmelee said that they usually get 50,000 to 100,000 parts out of the average aluminum tooling. The company has molding jobs that have been running for 10 years with the same tooling, since aluminum tooling lasts longer these days due to the new alloys.

However, Parmelee also said that steel molds are still necessary for some short runs because a few engineered resins require more durable tooling that can handle high temperatures. The resins might have fillers that are very abrasive and will quickly wear down aluminum tooling. Engineered resins are materials that the plastics industry has developed for critical uses. In addition to a base resin, they may incorporate a glass fiber, graphite, or maybe mica. The applications could be for UV light stabilization, added strength, or to self lubricate the part.

"We just did a multi-part project for Perkin Elmer, a case for a hand-held monitoring device," Parmelee remarked. "We did six molds for the project, three with an ABS plastic. And we overmolded the enclosures with a 1/8-inch thermoplastic elastomer, a thickness new to the industry. The cost for all six molds was only $65,000."

Wepco's lead times vary, depending on part complexity, but average moldmaking usually takes four-to-six weeks to finish for one or two different parts. On a rush basis, the company can output tooling in two weeks. "We produce many multi-part packages; of course, these take much longer to complete," said Parmelee. "We are working on a project right now with two different parts, each with two cavities. We will do the molds for the four different parts in a four-week turnaround."

Injection molding is known to provide a high level of precision for plastic parts. If the part is designed correctly, with the right material, and all other conditions are excellent, Wepco can tolerances of +/-0.001 inch. On most parts, the company holds standard industry tolerances of +/-0.005 inch. "We can do thin fins and deep cavities in some instances with the aluminum tooling, by inserting steel tooling in the critical areas," Parmelee explains. "So the prototype still remains cost effective and the parts come out with a nice appearance and very good detail."

Engineers might ask, "why come to Wepco Plastics for prototypes and short run molding?" The company's engineering solutions might be one answer. For example, several years ago, Wepco had a customer that manufactured an instrument that monitors electricity. The OEM had the project quoted as requiring all single-cavity steel molds. As a result, the moldmaking cost was so high that the company eventually canceled the product. One of Wepco's sales people happened to meet with them a couple of weeks after they canceled it, and asked to look at the prints.

"They had no idea the molds could be made out of aluminum," Parmelee recalled. "We've been making these parts for over ten years now. We figure that they have saved about 60% on capital expenditures and production costs using aluminum tooling. We averaged about 1,000 parts per year, until recently. We have saved them $250,000 and kept the product in manufacturing all this time."

Quite often, OEMs that are machining prototypes in plastic or metal at greater expense come to Wepco. One case involved a dental probe that a company was machining in metal. The machined part was very expensive and time-consuming to manufacture, and too heavy to hold during dental procedures.

"We were able to make the dental tool with injection molded plastic," said Parmelee. "Now they have a low cost, lightweight, sterilizable probe that is easy to use. The doctors like it because it is lighter and we reduced the overall manufacturing cost by about 75%. When we designed it for them, we kept in mind how it would be assembled, so we were also able to save them a great deal of wasted assembly time."

Company's Output and Marketplace are Diverse

The New England injection molding company started business in 1985 in Wally Parmelee's basement. Its present site is a clean, well-lit, professional, 10,550-sq-ft facility. The company now operates with 46 employees, six days per week, on two shifts per day in the molding area, and one shift in its large tool room.

Wepco serves a very diverse marketplace, providing parts to the marine industry for trolling motor and fish finder parts; to the electronics industry for hand-held devices and home security systems; and to the medical instruments and materials industry for probes, medicine dispensers, centrifuges, and safety-needle stick and blood collection devices. The company also furnishes parts for dental and home repair tools; and automotive parts for windshield wiper brackets, pumps, and seals.

The firm routinely churns out work for many large corporations. "We like the volume of work that comes in from the big corporations, but my small and medium-sized customers are just as important to me as the big clients," Parmelee concludes.

This technical information has been contributed by
Wepco Plastics