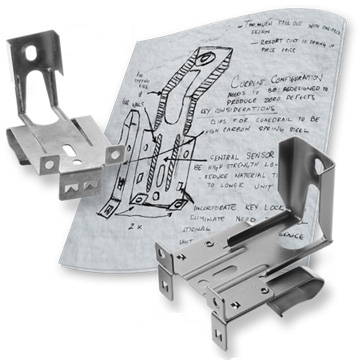 Fabricated wire products have been used for many years in products such as shopping carts, display racks, kitchen utensils and many other everyday items. Such goods are lightweight, sturdy and generally inexpensive. Uses for such conventionally produced products, however, have been limited by the relatively loose tolerances to which they are built. Now, design engineering concepts coupled with close tolerance manufacturing techniques have resulted in the ability to make wire products to specifications used in more sophisticated products. Whereas traditional wire forming might involve tolerances of 1/8" or greater, precision wire forming can mean tolerances as tight as 0.010". The combination of precision wireforms and precision sheet metal components has led to use in many high technology applications.

A wireform computer chassis allows for improved cooling and component accessibility and also results in lower tooling and production cost. Similar results have been achieved using wireform/sheetmetal hybrid components in printed circuit board mountings, peripheral chassis, disk drives and others. In such applications, the hybrids replace sheetmetal elements that weigh more, cost more and are more difficult to work with in assembling the final product.

Compared to the sheetmetal components which they generally replace, wireform/sheetmetal hybrids can weigh far less. A circuit board cage, for example, weighs 1.8 pounds. As a sheet metal component its weight would be over five pounds after allowing for tightening holes. eight reductions of 25 percent to 75 percent are typical. At the same time, the use of hybrids facilitates increased strength through the strategic utilization of simple wire braces and tie bars as deemed appropriate by the designer.

With increased strength, also comes better resistance to mechanical abuse so that wireforms can be used in situations where weaker alternatives cannot be employed or would have short lives. Such a situation exists with wireform circuit board processing equipment that was used to replace plastic cages. The wireform versions were able to be used in the production process for storage, transportation, cleaning and staging of printed circuit boards throughout the production operations. Although more costly to produce, the wireform variant's much longer life makes it the economical as well as the more functional alternative.

Because wireform components allow for a type of construction in which little if any of the material is lost or wasted in manufacturing, material is used much more efficiently. Scrap rates, not attributable to errors in manufacturing, are as low as 2 percent to 3 percent. Component cost savings can be as high as 10 percent to 30 percent, while tooling cost savings can also be significant. On a recent wireform/sheetmetal hybrid chassis for a disk drive, for example, tooling costs were $950 while the same cost for tooling on the sheetmetal version was well over $5000. At the same time, being quite flexible, wireforms in conjunction with sheetmetal allow for the variety of design options and lend themselves readily to straightforward, simple and effective design solutions such as a peripheral chassis.

Because wireform products have mostly rounded corners, safety concerns from sharp edges are considerably reduced. This can be a significant factor with products such as computer chassis which must be handled extensively by workers on the assembly line. Since the process of forming wire into usable products is a comparatively simple one compared to the working of sheet metal components, prototypes can be constructed with considerable ease and design revisions and modifications can be accommodated and re-prototyped readily.

Finally, the open design of wireform products makes them particularly well suited for plating or coating yielding good coverage with reduced bleed, seepage and shadows. A computer with a wireform/sheetmetal system utilizes a hybrid chassis which provides a rigid and precise method of aligning and securing the numerous components and sub-assemblies that are arranged to yield the finished product. A major consideration in the design was flexibility in configuring the final product. Engineers concluded that a hybrid chassis would meet these design parameters while maximizing the ultimate utility of the design.

To begin with, precision wireform products and hybrids need to be engineered to meet the demands of the high technology applications to which they are put. Besides being concerned with the dimensions and other characteristics of the component itself, how it is integrated into the end item must also be taken into account. Because dimensions are held to much tighter tolerances than in non-precision applications, production methods and fixturing must be tailored to meet these needs.

Production and quality assurance techniques are critical. Precision wireform jobs are carefully planned and laid out by production supervision.

The production technicians are trained to carefully check each step of their work through the use of blueprint reading in conjunction with calibrated inspection equipment. At one production facility, each technician has a set of six-inch calipers which he or she uses to check each applicable measurement. There are height gages (both vernier and digital) and granite surface tables provided at strategic locations within the production area and in the quality assurance area. Numerous 8, 12, 18 and 24 inch calipers are available for use as needed. All inspection equipment is regularly calibrated to standards which are traceable to the National Bureau of Standards.

Working with the User

Since precision wireform/sheetmetal hybrid components for high technology applications are seldom off-the-shelf type items, manufacturers work with the user t design items that best meet the customer's needs. In this manner, a specific design application, including any special requirements, can be satisfied by taking dvantage of the unique characteristics of hybrids. Although certainly suitable and frequently used for long production runs, hybrids can also be produced in short runs to meet the needs of prototyping and market testing. The process lends itself well to meeting the requirements of users operating on a just-in-time production system or a ship-to-stock program.

Precision wireforms and especially wireform/sheetmetal hybrid products are particularly suitable for use as chassis within enclosures or other master assemblies. The hybrid chassis provides secure, precise alignment and location of the various components while maximizing design flexibilities and minimizing product weight and cost. Subassembly and final assembly operations are enhanced through maximized product accessibility and minimized exposure to sharp edges by the assembly technicians. These hybrid chassis products would not be nearly as advantageous, however, where full enclosure and minimal design features are required.

The process of making products out of wire has progressed from loose tolerance everyday items to high precision products for high technology applications. In these applications, hybrids can mean lower cost, lighter parts that are easier to work with and which provide more flexible solutions to design engineering parameters than cannot be met by sheet metal alone. The hybrids also allow for flexibility in production that blends well with users on just-in-time manufacturing systems or ship-to-stock programs.