This technical information has been contributed by
Lumex, Inc. 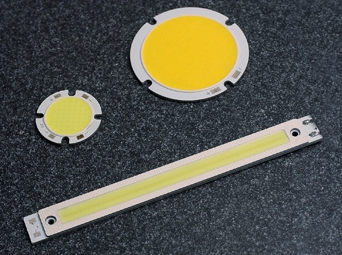 The enhanced shock and vibration resistance of wireless bonded LEDs, compared to traditional LEDs, stems from its more durable design. Due to the absence of a wire bond and a hard epoxy layer, the wireless bonded LEDs are said to be five times stronger and more robustly designed than standard, high power LEDs.

In addition, wireless bonded LEDs offer superior heat dissipation and are more averse to shock and vibration than traditional high power LEDs. They can withstand higher temperatures without compromising performance and have a greater surface area for heat dissipation, making them more efficient at removing heat. Due to the placement of junction pads on the bottom of the flip chip, heat can be transported faster than with a regular high-power LED, keeping this technology 25 percent cooler than traditional high power wire bond technologies, the company says.

Lumex also reports that wireless bonded LEDs provide superior light performance when compared with traditional LED technology. Higher light output is achieved in a more compact space, and the light performance is not disrupted by shadows or other obstacles to consistent performance. With wireless bonded technology, the chip can directly emit light from the top and the side, with no wire bond casting shadows or creation of uneven light distribution, providing 15 percent more light output, according to the company.

This technical information has been contributed by
Lumex, Inc.